Guns are Now Being Allowed on College Campuses

Another round of horrible policy decisions is making it's way into state constitutions. What is the academic response?

Colorado, Idaho, Kansas, Mississippi, Oregon, Texas, Utah and Wisconsin have all passed legislation to allow guns on college campuses. Recently, Georgia has passed a similar bill through both chambers of their Congress.

The debate over this issue typically centers on whether or not guns make campuses more or less safe. The allowance for guns on campus will not make campuses safer, so this shouldn’t be a debate. Now, let’s put aside the argument that there would be more school shootings, something that we can’t prove. A real threat, that we can identify here is the removal of academic freedom.

Academic personnel has weighed in on carry being allowed on college campuses: According to nationwide surveys, 94 percent of college faculty, 95 percent of college presidents, 9 in 10 campus police chiefs, and 74 percent of college students oppose concealed weapons on campus. Fear over guns is a real thing, with many fearing a horrific outcome. This is where that academic freedom comes into play.

With legislation passing in favor of this issue, universities will lose their effectiveness. Colleges and universities owe their effectiveness to the ability to discuss unpopular, or even controversial, topics all without the fear of governmental censorship. Likewise, institutions should be just as worried about politicians passing these laws as they should be with politicians assigning which materials or professors to instruct to classes.

Campus-carry laws are not about constitutional rights. Like most policy choices, the legislation on this topic is more about lawmakers passing biased ideas about situations which they are ignorant of. Even fundamentalist Supreme Court Justice Antonin Scalia led the Supreme Court to the recognition of an individual Second Amendment right to possess firearms in the home for self-defense but did not declare this right to be absolute. Writing for the Court in District of Columbia v. Heller in 2008, Scalia specifically stated that there was no doubt about the continued constitutionality of “laws forbidding the carrying of firearms in sensitive places such as schools and government buildings.” 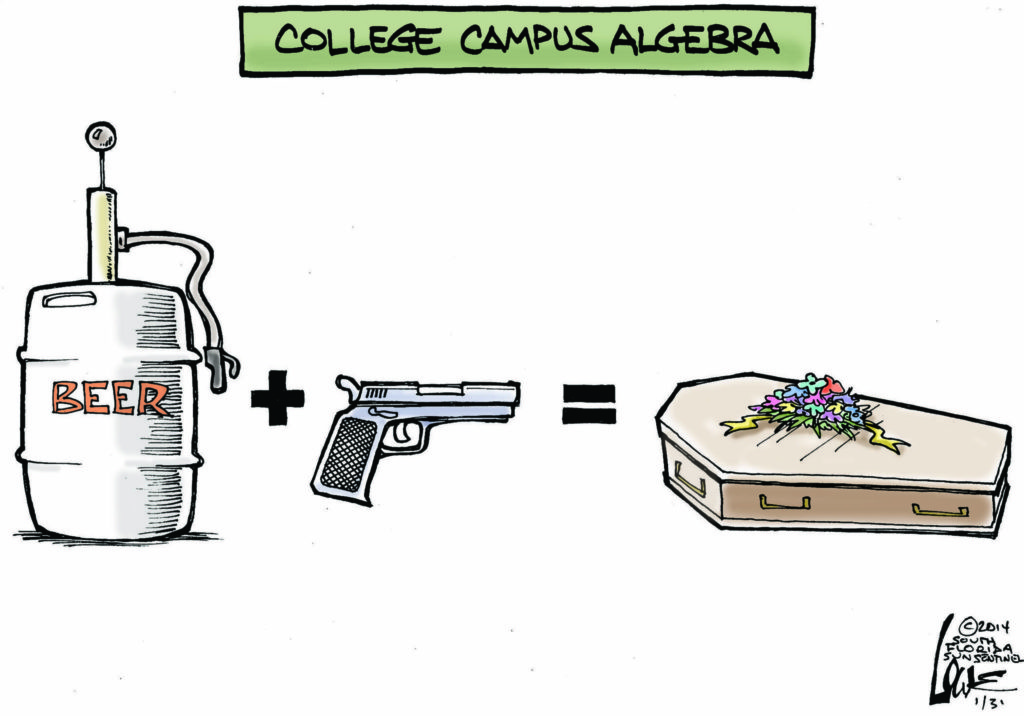 An argument that is often overlooked in this debate is the one that gives context to the current environment on campuses. There is already an atmosphere of alcohol and drug abuse on many college campuses, so how would guns contribute to the equation? This is similar to the Arizona law passed five-or-so years ago allowing guns in bars.

Students are much less likely to attend schools in states that mandate the idea of campus carry. State governments can only dictate this legislation on public schools. However, private schools in these states may indeed reflect the prospects’ decision to attend school elsewhere for fear of violence.

There’s arguably no better right than that of the right to protect oneself. With this being said, there is also a right to a quiet enjoyment in an atmosphere that is assumed safe by all: the academic experience. Thus, the idea of campus carry is probably not a bright one.