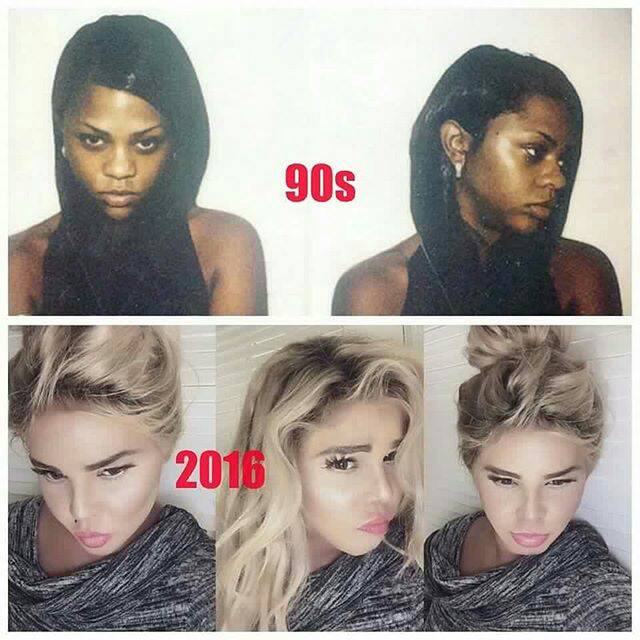 Have you ever had one of those moments when something happens that changes your whole way of thinking, in turn changing your actions and life? We all have right? One of those things that happened for me was being told I was sexy by my role model, Lil’ Kim.

Being short, dark skinned, without much body and rather plain looking I had always been teased, in school and at home. I had the type of mother who would make fun of me for looking in the mirror, telling me I was ugly and no one would ever love me. The boys at school teased, I was too Black, too skinny, too everything it seemed back then.

Recently, some photos of Lil’ Kim looking very much unlike herself were posted to the internet and made Kim the talk of all the gossip sites. I saw the pictures, I wanted to write about them but I couldn’t figure out how to write about what I was seeing come from Kim without writing about how It affected me personally. I just couldn’t, my view of Lil’ Kim is so wrapped up in my views of myself it is impossible to separate the two. I am who I am because of Lil’ Kim in so many way, not only because of how she saw and represented herself but because I molded myself after her example.

I didn’t have the best upbringing, grew up in the hood and bounced between my moms and grandmothers house because home was a place of abuse and despair. Molested young, I was overly sexual early. I didn’t have many outlets to escape life, we didn’t have the internet like there is now, we weren’t social networking in the mid 90’s. Three things I did have were my books, my writing and music. I have loved to read and write longer than I can remember and as I became a teenager and started high school music became a huge part of my life.

Being underprivileged and neglected most of the time I loved losing myself in a book as a way to escape daily life. I would dream of being famous, I wanted to be a star. I wanted to make a lot of money so I could afford to not live in a rat infested house, I wanted to have new clothes like the popular kids. I always thought I should be a writer or actor, I majored in theater in high school. I had little hope though, every day girls from the hood weren’t just becoming stars. It seemed like a fairy tale until I turned 15 and Lil’ Kim exploded onto the music scene with her debut album, Hardcore.

Hardcore changed my life, here was this girl who looked like me and shared a similar history, she was short like Me ( I’ve met her, she’s actually shorter than I am) and dark skinned, with kinda crooked teeth, she was extremely sexual and blunt, her mouth was vicious, she switched her look up regularly and had only the best of everything, no females in her crew just her and a group of dudes she called family. She was Me, everything I described was me at 15 and is still me now. Like many dark skinned girls she had given her all to a dude and watched him give his all to some fair skinned chick while keeping us on the side. She seemed to be what so many of us women needed, someone who would bluntly scream all the things that we echoed in our heads daily. I wanted to be just like her, I even started wearing wigs in high school.

Lil’ Kim was the epitome of a boss chick, she was on top of the game and calling her own shots. Over the years we have started to see her face transition as she had cosmetic procedure after procedure. She has become the butt of people’s jokes as they post pictures of what she used to look like when she was natural and beautiful. She’s had multiple facial surgeries and we’ve noticed it but the images she released on Instagram and Facebook recently were far beyond anything we should laugh at. Those photos have to be a cry for help.

I’ve seen quotes like these  attributed to Lil’ Kim and whether they are accurate or not I can’t say, if they are I can understand it. In fact, whether she said it or not I can guarantee you many women feel the same way. I’ve been there, even recently where they guy I dated last made me feel inadequate and when we ended our relationship, started dating someone who looks the opposite of Me, light skin with long fake hair.

I get it, I really do. It’s not easy in today’s society to look in the mirror and love yourself when everywhere you turn, the popular women are the ones who look more European. I too was a slave to the look for years, trying to fit in, to be seen as acceptable, to compete for men’s attention. Like Kim, I learned the hard way that women who look like us are great playmates but not the show piece. Through it all I continued to push forward, to love myself and not let myself conform too much. To try to balance between being true to myself and being acceptable.

When I first saw these pics of Lil’ Kim looking like Iggy Azalea my mind went back to 2005, the day she spoke to me. I’ve been lucky enough to see her perform live twice, once here in Baltimore in 2005 and again in Pennsylvania in 2012 believe. In 2005 I was excited to hear she was coming to town to perform at a party during Gay Pride weekend. My sister was on the promotional team and had two VIP passes so she invited me, knowing Kim was my idol. I was so excited. I got so dolled up because I figured VIP meant I may get a chance to meet her, even speak with her. I mean I was nails did, hair did, everything did, you feel me. I’ll never forget I wore pink open toed high heels, a white very short mini skirt with “sexy” written across the butt in pink and a pink bra top.

It was a concert in a club so no seats but we had front and center access to her because of our VIP access. I was close enough to the stage to rub her leg, yea I said it, I did it too. At one point when she was addressing the crowd she called me out for rapping every song right along with her, I was dead in when she spoke to me I took my chance and spoke back. I asked her if she liked my outfit, told her I’d dressed just for her. The lesbians in the room loved it and she did too. As I twirled around for her in my little mini she told me I was “sexy” and I was wearing that s#*t. Of course she made my night, in fact she made my decade to tell the truth.

From then on for at least a year when someone would call me ugly I’d laugh at them and say “Lil Kim thinks I’m sexy” or “whatever, if Kim says I’m sexy why would I listen to you?” When I felt inadequate and didn’t get the guy I wanted or lost him to a “pretty” girl I reminded myself Kim said I was sexy too. It was the thought that kept me going, I had no close family or friends to mold myself after, to motivate me but this boss chick who I love, she said something I needed to hear. When your role model says something it’s hard to listen to a different opinion from the average person.

A year or so later when I decided I wanted to be a model everyone told me I was crazy. I wasn’t model pretty and had no body. I jumped into the business in the summer of 2006 and had my first few photo shoots. Every day I had people telling me I was inadequate, total strangers. Can I tell you 10 years later I still have naysayers, people who tell me daily I’m ugly. The difference is 10 years later I’m a book cover model, magazine model, been in music videos, featured on sites all over the net and am successfully not only running my own business but also living my dream of being a writer. They are still telling me I’m inadequate, but they’re saying I can’t do everything I’ve already done. The first few years I lived off of her words, letting them push me through being told every day that girls like me had no business in the business.

Lil’ Kim was playful, loved to play dress up, could be feminine as a woman yet as dominant as a man. She inspired me, I molded so much of myself and later, my character of Sapphire, after her. To me she was the epitome of real sexiness, because she could switch it up without losing herself.

I thought the surgeries were bad but then I saw the new pictures and I was hurt, lost and confused. I found myself wondering what happened to her? I mean I know personally what it can be like for women who look like us but I don’t know how to describe what seeing her like that did to me inside. It hurt me more than these make up tutorials that teach Black women to contour their noses down to these thin lines.

I know it’s never been popular to have Black features or skin but how can it ever become acceptable to our own like this. Every where I look we Black women are under attack, encouraged to look more European, to straighten our hair, to downplay our features.

I see these pictures of Kim and I just want to do for her what she did for me, I wanna tell her “you’re sexy” and “you’re beautiful, you don’t have to change for anyone.” Someone needs to remind her that rich melanin she had is a gift. She broke all kinds of barriers just being herself and she inspired so many of us, more than who are probably willing to admit it. I went natural, gave up wigs, weaves and perms and have dread locs now, I rarely ever wear makeup. I’d be scared to see my idol now, I’d fear she wouldn’t see me as beautiful or sexy. That’s she’d find me repugnant because I have to same features she’s working so hard to hide and rid herself of. How can she look at me and not see the same things she hates in herself?

The years of plastic surgery were hard to watch but these photos are almost unbearable to look at. At a point in my life I was so used to hearing I was ugly until someone who mattered told me I wasn’t. I hope that the right person can get close to her, remind her that Kimberly Denise Jones was perfect just the way she was and stop her before she does something too drastic in her quest for acceptance.