Officer Edward Nero was found not guilty on all charges stemming from his involvement in the death of Freddie Gray today in a Baltimore court. The head of the local FOP has renewed cries that the charges should be dropped against all the officers indicted. Next up on trial is Officer Caesar Goodson, Jr. his trial is slated to begin June 6.

Officer Edward Nero was  found not  guilty on all charges  stemming from  his involvement in the death of Freddie Gray today in a Baltimore court. 30-year-old Nero,  was indicted last year, along with six other officers, after 25-year-old Gray died from injuries sustained in police custody.  The Baltimore officer decided against a  jury trial and instead,  requested a bench trial, Judge Barry Williams presided.

Judge Williams  ruled that the  state did not provide enough  evidence to make the  charges against Nero to stick. Williams  took about  20 minutes to  deliver his ruling to a packed  courtroom and  nearly packed overflow room.

Outside the courthouse a crowd, mainly reporters, gathered. There was a small group of peaceful protesters as well.

Reporters outside the courthouse seemed shocked there weren’t more protesters, they questioned the few there as to why there wasn’t a bigger crowd and wondered “if people still care.” It’s almost as if they wanted a repeat of the chaos that erupted after Gray’s death last year.

After the  verdict was read the  suspended officer put his head down and began to cry. He was consoled by a line of police officers, mainly in plain clothes, that had filled the courtroom as spectators.

There have  been many reactions to the verdict already

“The State’s Attorney for Baltimore City rushed to charge him, as well as the other five officers, completely disregarding the facts of the case and the applicable law. Officer Nero is appreciative of the reasoned judgment that Judge Barry Williams applied in his ruling,” said the statement released by Nero’s defense attorney Marc Zayon.

“I believe it allowed the police officers to do their job, and if he was found guilty, I believe many officers would have been hesitant to do the right thing when it came time to dealing with crime because they would be afraid to be prosecuted,” Nero’s father told a CNN affiliate station.

The attorney for Freddie Gray’s family, Billy Murphy, praised Judge Williams for his verdict for not “bending” to the public will and handing down a fair and impartial verdict. “You couldn’t ask for a more fair-minded judge than Barry Williams,” Murphy told reporters.

The head of the local  FOP  has renewed cries that the charges should  be dropped against all the  officers indicted.

Officer Edward Nero is the  second officer to be tried in the death of  Freddie Gray in police custody last year. Though he is the second to be tried, he is the first to have a verdict. The first officer tried, Officer William  Porter,  trial  ended in a hung jury last year. He is scheduled to be retried in September. The next officer to  be tried is  Officer Caesar Goodson, Jr., who was the van driver.

It is to be noted that Freddie Gray was detained because he took off running as Officer Nero and Officer Miller, who testified for the prosecution, approached on bikes. The officers pursued Gray because he took off running in a known crime area. No drugs or drug paraphernalia was found on Gray. What was found on him was a pocket knife which police claim is illegal but the prosecution argued was a legal knife. That is the prosecutions cause for their assault and one of the misconduct in office charges. According to prosecutors, Gray should have never been detained past the initial search that yielded no drugs because the knife he possessed was legal. Prosecutors dropped that argument after police found a code it violated. Prosecutors then argued that the police had no idea he possessed the knife when they stopped him. They contend that everything that happened past him being detained and searched was assault, and his arrest was illegal. Prosecutors were not allowed to even mention the knife during the trial.

Nero was also charged with reckless endangerment for his part in helping to load Gray into the van on his stomach on the floor of the van handcuffed and shackled, instead of buckled in per protocol.

If you’ve been  following the trial then  Judge Williams  ruling  may not  come as a surprise. The questions Judge  Williams  asked of  prosecutors last week during  closing argument were very detailed. It’s clear that  some of the answers he received helped form his  opinion in the ruling.

At one  point he  asked the  prosecuting  attorney,

Judge Williams then contended that by the prosecutors definition that a hug could constitute assault.

After the  verdict local defense attorney Warren Brown who has been following the case told reporters “To make a case when there wasn’t a case, Marilyn Mosby’s office decided early on, they were going to charge Nero and Miller. They were the ones on camera, they were the white officers, they were the ones that garnered the most amount of concern in the community. So they had to charge them but I think realistically they never should have been charged.”

Though Officer Edward Nero was found not guilty on all charges he is not out off the woods yet. There is still an internal investigation ongoing. The internal investigation is being conducted by other police departments and will not be concluded until the trials of the five other officers are finished. The Baltimore City Police Department has released a statement

Although the criminal case against Officer Edward Nero has come to a close, the internal investigation has not. With that, Officer Nero’s status will remain unchanged. He will remain in an administrative capacity while this investigation continues.

Next  up on  trial  is  Officer Caesar Goodson, Jr. his trial  is slated to begin June 6. Goodson was the driver of the van  transporting  25-year-old Freddie Gray and is facing the following charges,

Woman Raped On D.C. Metro During Rush Hour Police Say. Do You Believe The Official Story? I don't.

Oscar Pistorius Not Guilty of Murder, But Lesser Charges Possible

Oscar Pistorius, The former South African Olympic hero, is not guilty of murder but could still be sentenced for other charges.
byAssociated Press 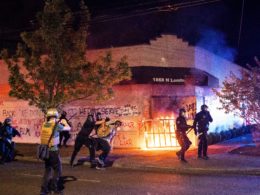