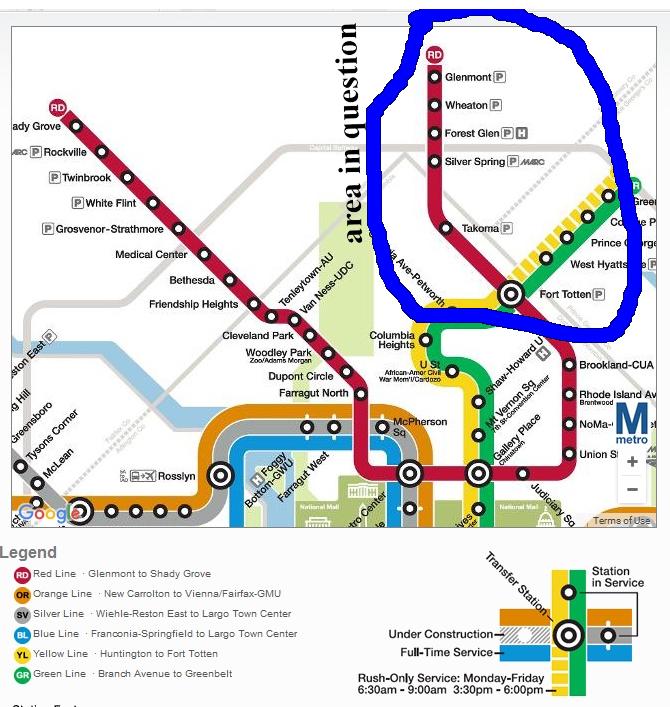 According to DC Metro Transit Police a woman was raped on a D.C. Metro train last month, information is only coming to light after the accused rapist made his first court appearance. 39-year-old John Prentice Hicks is being accused of raping a woman at knife point during morning rush hour. Hicks has a history of prior sexual offenses on his criminal record including sexual abuse and attempted sexual child abuse. Detectives identified Hicks as a suspect in a previous indecent exposure claim on a Metro train.

While this is said to have happened on a D.C. metro train I am deeply disturbed by the fact that this information was kept silent for over a month. Although Hicks was picked up the same day any time a crime this horrific happens the public must be notified because there may be someone bold enough to copy the act after noticing the rape got no attention. Even worse that they never heard of the rapist being caught, so anyone who knew it happened might have felt further emboldened that they were free to rape at will because there was another rapist with the same M.O.

D.C. is a major work hub with people from Maryland and Virginia traveling in every day and yet the public heard nothing of this rape. You’d like to think that if this happened to a sleeping woman on the train in the middle of morning rush hour it’s something that D.C. Metro Police would want riders to be aware of. You’d think they’d warn people to be more aware of their surroundings but there had been no mention at all of this case until John Hicks bail hearing.

The 39-year old victim tells police that she fell asleep on the metro and when she woke up at the Takoma Park station she noticed a man she thought to be between 35 and 40 approaching her.

She tells police the man asked if she had a boyfriend and whether she was riding to the Glenmont station. She says the man then pulled a knife on her and put her in a bear hug and “forcefully guided her to a separate potion of the train car, blocking her attempts to exit.”

Then he raped her. After raping her, he then made her sit in the corner of the trained and forced her to commit a sex act reads the report filed by Metro Transit Detective CH Dority.

WAIT! So upon doing My research for this story I HAD to pull up the map for the D.C. Metro to see how it correlated with the story. If the victim woke up at the Takoma Park station and was first approached by her attacker that means the train made THREE stops before it arrived at the Glenmont station. In THREE stops, not one person entered this train during RUSH HOUR? In THREE stops she didn’t scream once when the doors opened?

No one saw a thing? At 9 something on a Tuesday morning, during rush hour, no one got on this train and saw a man stopping a woman from exiting and raping her? And she never screamed.

While I am never one to outright question a rape I have some serious questions I need answered to understand this case. According to every account I can find this rape and sexual assault happened before 10 a.m. While writing this story I literally begged that the calendar would prove to me that April 12th was a Saturday or Sunday. It didn’t, April 12th was a Tuesday. Tuesday morning, before 10 a.m. and a woman was raped on a metro train and didn’t scream. Reports show that the accuser had a cut on her finger, supposedly gained from a struggle over the knife. Reports further say that when the rapist left the train she walked out to “talk” to a D.C. Metro worker and was taken to the hospital.

When he got off there were no other passengers still after  three stops? You didn’t scream out then? Say why didn’t no one help? You “walked up to” a worker and talked? Not ran, not screamed, not pointed to where you say you just saw the rapist enter the other car.

Not one report mentions if they were on an isolated train car nor does any report I can find bear any witness statements.

The report filed also states the victim saw the rapist board another train at the Glenmont station. Investigators say that Hicks SmartTrip metro card showed him exiting the Glenmont station at 10 a.m. Police saw a man exiting the train at the same time the victim says her attacker did on surveillance cameras the police report indicates. The victim picked Hicks out of the line up of 6 men by saying she recognized the “shape and size ” of his face and the “size of his eyes.”

Really? A man approached you and talked with you first and then spent time chasing you around a train car before assaulting you twice and you don’t remember any of his facial features when picking him out in a lineup the same day?

There has been so much going on surrounding the D.C. metro system lately. Fires, deaths, assaults, stabbings, and now a rape…. If you didn’t know better you’d think someone was looking for an excuse to shut down the system and upgrade it with new surveillance and “wiring.”

I’m the first one to advocate for the victims of rapes and I KNOW I’m going to catch flack for this article. Before you attack me I ask that you remember just that, I am the first to condemn rapists. I have no pity for this Hicks man who has a history of sexual assaults. I have pity on the American people who are constantly terrorized by the American government and their false flags attacks on society. The create a crisis and then come to fix it.

There has been extreme protest to the fact that the D.C. metro is scheduled to undergo major disruption in the coming months as they “rewire” many of the lines. They’ve hinted at the fact that they really want to shut the whole line down.

I am looking more into this case, I smell a rat. What do you think? Do you believe a woman was raped on a D.C. train during rush hour with the train making THREE stops before reaching it’s final stop and no one saw a thing?

John Hicks is due back in court June 10, his public defender requested bail but Zuberi Bakari Williams denied bail and order him detained until his next hearing. Hicks is a forklift operator with 4 children who lives at home with his mother.

“This is a horrifically terrifying experience. It certainly was for the victim in this case,” Assistant State’s Attorney Elizabeth Haynos said in court. She told the judge that  the victim surprisingly had felt safe riding alone in a train car. And we are to believe that if  it was empty at any point it stayed  empty  during  D.C.’s rush hour as the train made three stops while headed to it’s final destination.

“I don’t know many people who would have thought this would have happened in such a public arena — and that somebody would have the audacity to do that, particularly at 10 a.m.,” she continued.

I agree….during rush hour…and no one saw a thing.