I Am Black And Conscious, I Celebrate Juneteenth. Keep Your European Independence Day Away From Me

I might sound harsh but Frederick Douglass said it best in 1852 when he said “The rich inheritance of justice, liberty, prosperity and independence, bequeathed by your fathers, is shared by you, not by me,” he continued. “This Fourth [of] July is yours, not mine.”

It’s summer and that means the usual questions have started, “What are you doing for 4th of July, Labor Day, Memorial Day? No one ever asks what I’m doing to celebrate Juneteenth. Every year as the celebration of the traditional European holidays from Christmas to Independence day draw near I cringe. As a Black person in America I watch as my traditional customs and holidays are ignored or made to appear non existent and European centered holidays are pushed at me.

It’s June and that means it’s time for my people and those who celebrate our freedom come together and commemorate when ALL Americans officially gained legal rights. There are those who want us Black Americans to just blindly follow the status quo of American holidays, they also want us to forget that when these holidays were first celebrated that my ancestors were mere property. In fact, according the constitution that we are all governed by and this great nation was founded on, Black people were 3/5 a person.

In September 1862 during the Civil War, President Lincoln made a radical move and freed the slaves via the Emancipation Proclamation, effective January 1, 1863. It was not a popular move, the confederate and union states were locked in an intense battle for dominance and control of America. The Emancipation Proclamation declared all slaves to be freed in the Confederate States of America in rebellion and not in Union hands. Being as though Texas was not a battle state and was so far from where the fighting was taking place, news that the slaves had been freed did not reach Texas for two years.

There was no internet like today and many stories have been told on what exactly prevented the news from reaching Texas for so long. Many slave owners who wanted to avoid the battle had fled to Texas with their slave and by 1865 there were an estimated 250,000 slaves in Texas. The war officially ended June 2, 1865. It was June 19th 1865 when Union General Gordon Granger, a day after arriving in Galveston, stood on the balcony of Galveston’s Ashton Villa and read aloud the contents of “General Order No. 3”

The people of Texas are informed that, in accordance with a proclamation from the Executive of the United States, all slaves are free. This involves an absolute equality of personal rights and rights of property between former masters and slaves, and the connection heretofore existing between them becomes that between employer and hired labor. The freedmen are advised to remain quietly at their present homes and work for wages. They are informed that they will not be allowed to collect at military posts and that they will not be supported in idleness either there or elsewhere.

The first few years after the slaves had been freed they celebrated “Juneteenth” a play on the words June and nineteenth, the day of official African American freedom in America. The newly freed slaves felt far from free however, they were forced to now work for wages on land they once toiled as slaves. Those who ventured out on their own across the south found that laws had been enacted to disenfranchise them further still. They were also blocked from entering the political arena. Juneteenth celebrations died down in the south, especially once the great depression hit.

With the great migration, as more and more Black families headed north in search of better opportunities in the 1950’s, the celebration of Juneteenth started to spread in areas that it had never been heard of before. In 1968 the Poor People’s Campaign to Washington, D.C ( May 12- June 24, 1968) helped spark Juneteenth celebrations in even more areas as people went back to their own communities with new knowledge of their emancipation heritage.

Last year with the 150th milestone celebration of Juneteenth President Obama released a statement. It said in part,

We don’t have to look far to see that racism and bigotry, hate and intolerance, are still all too alive in our world. Just as the slaves of Galveston knew that emancipation is only the first step toward true freedom, just as those who crossed the Edmund Pettus Bridge 50 years ago knew their march was far from finished, our work remains undone. For as long as people still hate each other for nothing more than the color of their skin – and so long as it remains far too easy for dangerous people to get their hands on a gun – we cannot honestly say that our country is living up to its highest ideals. But Juneteenth has never been a celebration of victory, or an acceptance of the way things are. Instead, it’s a celebration of progress. It’s an affirmation that despite the most painful parts of our history, things do get better. America can change.

Read the rest of his statement.

When people ask me what I’m doing for the Fourth of July I am quick to tell them, the same thing I do every day. I remind them that it makes no sense for me to celebrate a holiday my ancestors weren’t allowed to celebrate. We lived in America, but at the time of America’s inception and for almost 100 years after it, my ancestors weren’t even seen as humans with rights and privileges. Me celebrating the Fourth of July is akin to a Native American celebrating Thanksgiving. I might sound harsh but Frederick Douglass said it best in 1852 when he said “The rich inheritance of justice, liberty, prosperity and independence, bequeathed by your fathers, is shared by you, not by me,” he continued. “This Fourth [of] July is yours, not mine.”

What holiday do you think he would be celebrating this summer?

I beg of you, do not lose sight of who you are and your place in America’s history. There are two histories of America, one taught in school and one in the underground channels, just as the slaves learned hundreds of years ago. The history books in America start with Blacks as slaves when we know we come from royalty. America’s schools teach of American traditions and holidays, though America is a melting pot of cultures and ethnicity. It is left up to each culture and community to not only educate their descendants, but to teach them their traditions, thus enabling them to embrace their heritage.

This year, celebrate the TRUE day we became free and were recognized as people, not the day one set of Europeans decided to free themselves of another. In doing so they kidnapped us to help build their new world, to toil while they played, to suffer at their hands and whip, to be raped and murdered. Is that what I’m supposed to celebrate on July 4th? Do you want to?

For more information on Juneteenth check out http://juneteenth.com/. If you live in one of the 45 states that recognize Juneteenth look at your local events to see how it’s being celebrated this year and get in on the action. Plan your own events at home, schools and in your church community. A few ideas for celebrating Juneteenth are below.

Encourage your neighborhood to decorate and display Juneteenth yard signs and banners.

Plan a special gathering with friends to acknowledge Juneteenth. Exchange facts or quotes from history. Discus significant and historical events have impacted your life today.

Baltimore's Criminals Hit All Time Low. Raping The Elderly, Robbing Kids, What Happened To Our Society?

Muhammad Ali Sold The Rights To His Image, Slogans And Intellectual Property. ABG Set To Rake It In Big After Ali's Death. 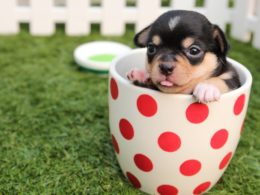 5 Things Every New Fur Parent Should Have

Congratulations on adopting a puppy! While raising a puppy is filled with plenty of excitement, the experience can be time-consuming, stressful, and pricey.
byTUT Staff

Homebrewing Is legal in your state!
byBradley Robbins

With regards to men and what colors they like, blue is still the number one color regarding to…
bychar Charles