A first generation Haitian-American born and raised in East Flatbush, Brooklyn, NY. Frantz Derenoncourt, Jr. had very humble beginnings growing up he was often picked on for being Haitian. Children would always have a cruel Haitian joke, teachers could never pronounce his name correctly, so naturally at times, Frantz felt ashamed to be Haitian.

So then Frantz decided to turn a negative into a positive by reading everything he could about the Founding Fathers of Haiti and their history which lead to him creating Haiti: The First Black Republic, a children book about the first and only successful slave revolt.

Will you travel back to Haiti to do a book reading?

Yes. Since I’ve come out with the book, I have received a few opportunities to come to Haiti to present my book. I’m looking forward to traveling there to share my work.

What about Eminence System made you choose him to illustrate your children’s book?

I wanted my book to have a certain look. Although it is a children’s book, I still wanted the characters to look real. When I saw Eminence System’s profile, they had many illustrations that I liked. After a few conversations and sketches, we came up with something that I was very happy with. 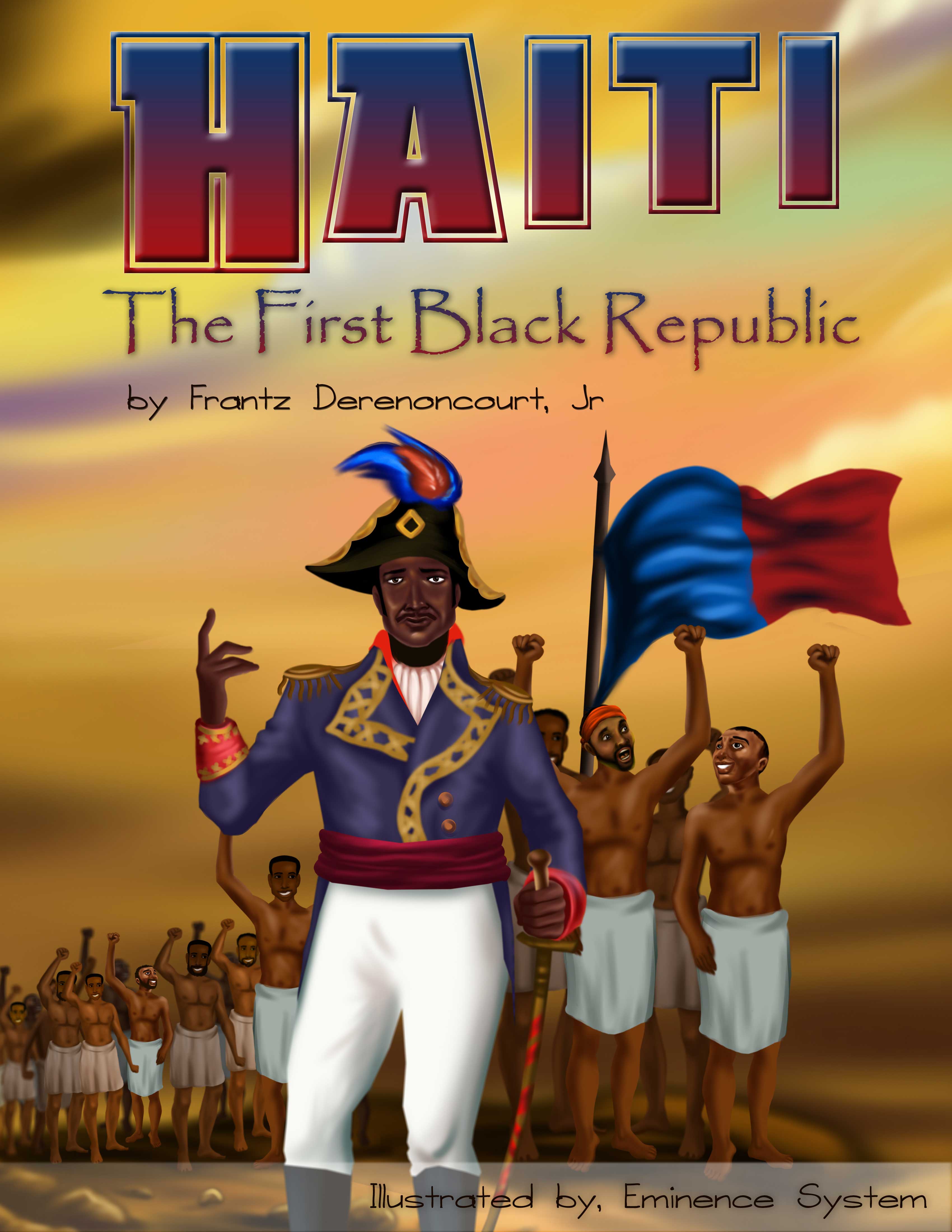 How many pages is your book?

My book is about 34 pages however, there are only 14 illustrations. The images are landscaped so they stretch across both pages. I really wanted the artwork to pop out to the reader because it tells the story just as much as the text.

Do you speak French and/or Spanish and will your book, Haiti: The First Black Republic ever be released in those and other languages?

Actually, English is the only language that I am fluent in. I know a little Haitian Kreyol. The book will be released in Kreyol and French this summer. I’m thinking Spanish next year.

What are some testimonials your son Chase did for the book? Did he want to have it read to his classmates at school?

Chase is very proud of the book. We were able to present it at his school during the Black History Month program and he did a great job.

“Special Note:http://colorofhope.org A portion of the proceeds from each sale go to helping build libraries in Haiti through the Color of Hope non-profit foundation.”

What is the story behind you partnering with this charity?

I was introduced to The Color of Hope Foundation by my uncle Karl Gerdes. I was impressed with the founder Ed Shakespeare’s vision for providing education for the youth in Haiti. Education in Haiti continues to be a difficult battle and Color of Hope is on the front lines. Anything I can do help, I’m all for it.

What inspired your other book, Black Man Rise? Is it a children’s book for adults? Do you have an image of the cover I can view or a website for it?

Actually, Black Man Rise is not a book, it’s something my publisher put on my website for speaking engagements. My book is about the Haitian Revolution, the first time enslaved Africans came together to form an army and win a war against their European oppressors. Black Man Rise talks about us coming together again while using the Haitian Revolution as precedence that we did come together to win under similar oppressive conditions that a lot of us find ourselves in today. History often repeats itself.

What would be your dream establishment to give a presentation at? For example, Barnes and Noble/White House. What would it be and why?

My dream establishment to present my book would probably be to black children in the poorest neighborhoods in the United States. I say the US because most Haitians are aware of their history but most African Americans are not familiar with that part of black history. The Haitian Revolution is not taught in schools so they will never know that black people did have an amazing accomplishment that shook the entire world at the time. Often times I feel that black children feel defeated because of their current situation. But the enslaved Africans were able to come out of probably the direst situation in history, slavery, and fight for what they believed was right…their freedom. This story isn’t told to our youth enough. I believe that it inspires and gives them hope. We need that for our next generation.

“My mission for this book is to establish a sense of pride in the black youth all over the world. I also aim to tell the stories of success and victory of a people against impossible odds.” What is your sense of pride being a male of color?How did you establish success when it seemed impossible?

Black pride is important. Black people, especially the youth, should feel comfortable and confident in who they are. I feel that I have a responsibility to spread awareness that we are a great race of people that have accomplished great things in history and will continue to do great things in the future. As for me and my accomplishments, I was inspired by my ancestors. I give them all the credit.

The Playboy Mansion Has A Buyer. Hefner To Remain In Residency With Purchase.

Why Am I Addicted to Cora Harrington?

Why Am I Addicted to Cora Harrington?

On His Song “Let Go My Hand,” J. Cole Confirms His Rumored Fight With Diddy

With His Breezy New Song, “Motorbike,” Leon Bridges Ushers In A “Gold-Diggers Sound”

On “Seeing Green,” Nicki Minaj Joins Drake And Lil Wayne In A Royal Return To Her Barbz

In Netflix’s “Masters Of The Universe: Revelation,” We Get Our First Look At He-Man

Drake’s “God’s Plan” Video Featured A Woman Whose Tuition He Paid, And She’s Posted Photos Of Her Graduation