The Past 72 Hours May Cost Donald Trump His Whole Campaign

Donald Trump has been talking out the side of his neck again and this time no one's having it.

Within the past 72 hours Donald Trump has received a major drop in his poll ratings. He’s losing supporters left and right. This drop is due to retaliation towards a Gold Star Muslim family and a silly comment he made about Russian President, Vladimir Putin.

During an ABC News interview with George Stephanopoulos, Donald Trump Insisted that Putin was not going to invade the Ukraine. George corrected Trump and told him that Putin is already in Ukraine. Putin invaded Crimea back in 2014. Americans feel like this is something that someone who wants to be commander in chief should have known already. How are you going to fight Isis when you don’t know whats going on in other countries?

He tried to cover it up with “he’s there in a certain way” but no one was buying it. In fact Donald Trump received lots of laughs and ridicule throughout the media, because of it. Now his qualifications to the run this country are being questioned.

Captain Humayun Khan is a Muslim and war hero, who gave his life 12 years ago in combat to save hundreds of his troops.

Khan’s parents addressed Donald Trump at the DNC. Trumps feelings about Muslims are no secret. Mr. Khan called Donald Trump Ignorant and asked him if he ever read the constitution. 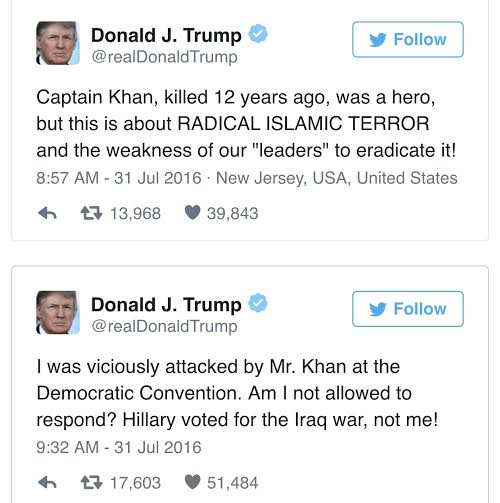 Mr. Khan did a short press tour a few days ago. He said the thoughts Donald Trump shared are expected from someone ignorant. Mrs. Khan spoke up as well and said it was difficult for her to speak without crying at the DNC, which is why she was so quiet. She also said her religion, her family, and no one else has ever kept her from saying what’s on her mind. 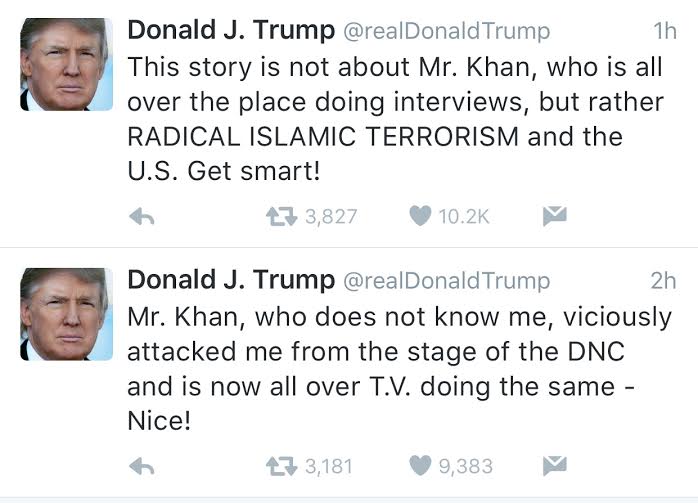 Family members of troops that lost their lives during battle created the Gold Star Families. Americans are not happy with Donald Trumps back and forth with the Khans, because they are a gold star family.

Famous billionaires such as Mark Cuban, Warren Buffet and Michael Bloomberg are endorsing Hillary, because of Trumps remarks. 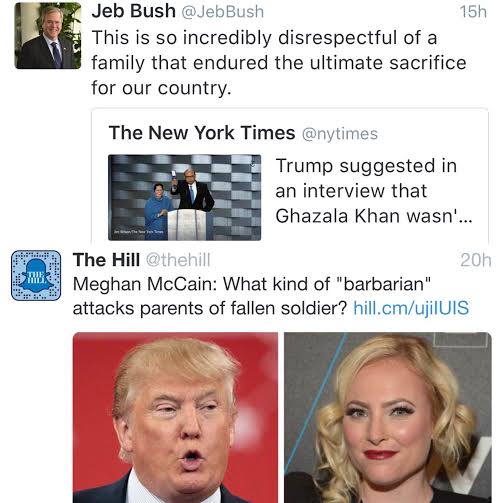