Gabby Douglas is a tremendous athlete. At only 20, she is a two-time gold medalist in 2 Summer Olympic games. A doll was created in her likeness because she IS #blackexcellence in the flesh. Team USA should be celebrating but we can’t because “Houston, we have a problem.”

Black folks won’t let Gabby be great. She is being attacked about her hair YET AGAIN. The same mediocre ass negroes; whose children are the spawns of despair and “what the fuck” can’t see the magic in this young sister for her edges. Edges that actually exist by the way. Because we all know that chick whose name should be “Patches” instead of “Peaches” because #TeamNoEdges.

Of all the things that Gabby Douglas could be called, “Beady Bead” should never be one of them. She’s not involved in any mess. She is dedicated to her craft and an inspiration to little “nappy-headed” girls around the globe.

I’m disgusted by what I see on social media. This was a celebratory moment for TWO young sisters but celebration has been replaced by piece of shit dialogues about hair. And you can tell these assholes, who are spewing ignorance, received participation ribbons and trophies. They weren’t actually GOOD at anything. But their mamas made sure their hair was pressed before they entered the kingdom of loserdom.

I’m so tired of folks who wouldn’t know dedication and perseverance if their daddies had it tattooed on their funky asses. 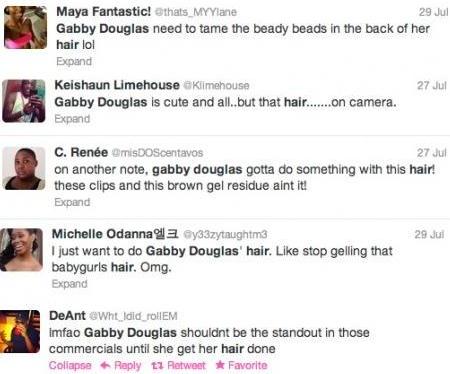 This is way bigger than her mane. These pathetic examples of self-loathing are detrimental to our communities. It is detrimental to our race. We are so quick to diminish the light in our girls. We subject them to horrible abuse while we laugh. I will not allow you to diminish another black girl’s shine in my presence.

My daughter could have been Gabby Douglas. She’s a nappy-headed, unapologetically black girl who could bust down a backflip on your ass. She is strong physically and mentally but I still have to protect her from the likes of savages with no home-training.

When you see something in someone who is great that could be perceived as a bad attribute, keep your average ass mouth shut and allow greatness to bless you with her presence.

In The Trailer For The Documentary ‘All The Streets Are Silent,’ Hip-Hop And Skate Culture Collide In New York City

A Trailer For E3 2021, An Event Where You Mostly Just Watch More Trailers, Has Been Released

Polo G Defiantly Proclaims That He, The Kid Laroi, Or Lil Durk, Has No Return

How to Get the Best Outdoor Patio Cushions