Child Support is Not a Black Mother’s Hustle

When my wife and I decided we wanted a child we spent a full two years planning. We increased our savings, created wills, and paid down our debt. More importantly, we spent a significant amount of time discussing how we would parent and the impact parenthood would have on our relationship. Not only did we plan for the here and now, as uncomfortable as it was, we also speculated on how we would co-parent if our marriage were to end. That included custody arrangements, the splitting of assets and yes, child support.

We have always been a two-income household, but my wife has always been the top earner. And while I know I would be able to provide for our child on my own, there is no reason why my wife shouldn’t pay child support. I didn’t make the decision to become a parent on my own, and I won’t shoulder the financial obligations alone.

Children are beautiful but expensive blessings. Our daughter’s monthly expenses include daycare, medical and dental insurance, prescription medications, food, entertainment and other incidentals. Her expenses alone are more than $1,300 per month. Now factor in the electricity, water, and other necessities. So, are we to believe the custodial parent should pay for most of these expenses while also maintaining a roof over their head for both them and their children?

I’ve read ashy think pieces that blame everything thing from the prison industrial complex to Bitter Mama Syndrome for the reasons black men are forced to pay child support. Black men and pandering women view child support as a punishment and not an obligation. Many believe it’s a form of revenge because their relationships with their children’s mother didn’t work. 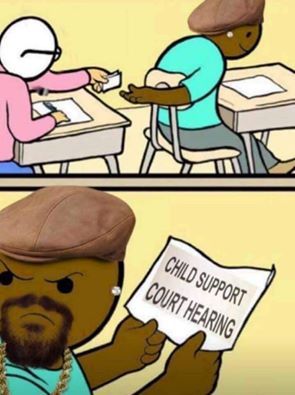 There’s always chatter about child support enslaving black fathers and adding to their debt, yet we refuse to discuss the financial burden custodial parents, specifically, black mothers have to shoulder. There are always conversations about what child support should and should not be used for. Most think child support shouldn’t be used for towards rental and mortgage payments, but isn’t it a custodial parent’s duty to provide a home for their child? Many believe mothers spend those payments on their own personal grooming habits such as hair and nails.

The average monthly child support payment is $430. Let’s be real. That doesn’t cover most daycare payments, let alone other monthly expenses— do you really believe mothers are spending it on their personal care? If anything your support reimburses them for expenses they have already paid for.

There are other, probably more eloquently written pieces about child support, and all the reasons it’s necessary. So, I won’t go on and on about it. There’s nothing new I can add to the conversation. It’s a tale as old as time, and black men will continue to believe what they want to believe. What I want to focus on is a more novel approach to child support. It’s an idea many don’t consider and I think it could truly bring an end to the ‘black man versus baby mama’ debate.

We’re past the discussions about hormonal contraception. We’re past blaming black women and making them shoulder the responsibility of birth control because they can’t be bothered to stop by the pharmacy and grab a box of condoms. We’re past shaming them when birth control fails or not used at all. We’re past blaming them for having sex, only to further shame them when they ask for their current or former parents to financially go ”half” on a baby. It’s time for black men to consider vasectomies. Most insurance providers cover them. In the long run, even paying out of pocket would be cost them considerably less than the average $430 most will pay in child support over an eighteen-year period.

We’re done blaming black mothers, bihh. It is time for black men to turn those ashy meme making, Twitter fingers into Google fingers and find suitable urologists and get to snippin’. I’ve worked in the field of sexual health for over a decade and vasectomies are proven effective at significantly reducing unintended pregnancies. If the thought of you paying for your child to enjoy the quality of life you enjoy sickens you, then maybe you should take preventative measures.

Product Review: My Hair Heaven with Creme Of Nature (Argan Oil From Morocco)

Opioid Abusers, What Are they Abusing Now?

What You Should Know About Military Base DUIs

Different Ways to Invest Your Stimulus or Tax Return

How To Overcome a Bad Background Check

Basketball Themed Room: How to Create an NBA Team Basement?

Opioid Abusers, What Are they Abusing Now?

Kissie Lee Talks About How Her Passion For The Theater Inspired Her To Pursue A Career In Music.

What You Should Know About Military Base DUIs