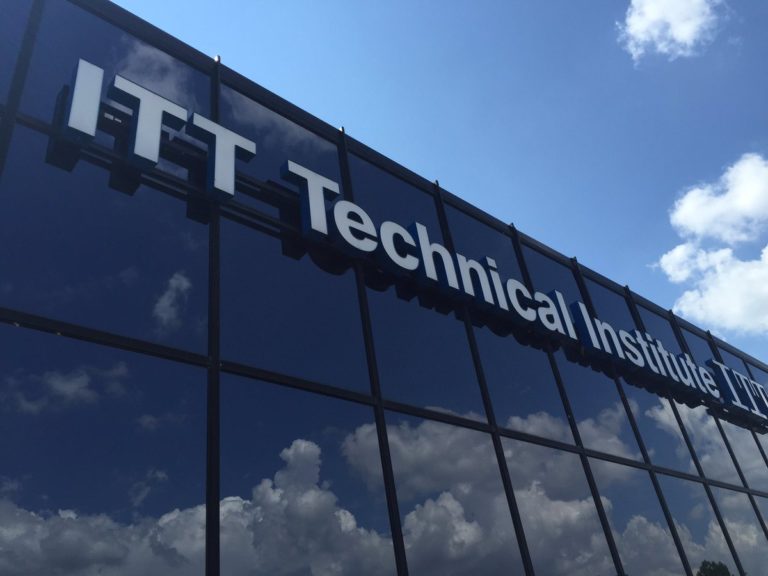 The federal government has stopped financial aid for students attending ITT Tech across the nation, forcing the for profit college to close its doors. The sudden close had left close to 43,000 students as well as thousands of employees in limbo.

A Message From ITT Tech

After more than 50 years of educating students, ITT Technical Institute has discontinued operations at our resident campuses.

At this time, we expect that online students in the July 2016 academic term will be able to complete the term  which is scheduled to end on October 16, 2016.

We want to thank all our students and staff who were with us over those years and wish all of you the best in your future.

Though displaced students now say they had no real warning that their schools were closing, it came as no big surprise to some. Late last month the U.S. Department of Education announced that it would no longer allow prospective students to utilize financial aid monies to attend the vocational school.

According to U.S. Undersecretary of Education Ted Mitchell the decision came as a result of multiple state and federal investigation into the now defunct schools practices. In at least two incidences it was found that ITT Tech was out of compliance with accreditation standards. “Over time, ITT’s decisions have put its students and millions of dollars in taxpayer funded federal student aid at risk,” Mitchell has said. “These investigations are still ongoing, and last week ITT still failed to address its accreditor’s concerns. In response, today we’re announcing further federal action: To protect prospective students and taxpayers, we’re no longer allowing ITT to enroll new students with federal aid.”

ITT Tech operated under the parent company ITT Educational Services which ran six schools and 130 campuses across 38 states and has been in business 50 years. The closing of its campuses leaves current students with various options from attempting to transfer their credits to a loan forgiveness program. Students enrolled to start in the fall semester have been made aware that they need to find another college if they hope to use federal financial aid money.

Earlier this year the Accrediting Council for Independent Colleges and Schools, which governed ITT Tech, lost its authority to give accreditation to schools. Senator Elizabeth Warren wrote a scathing report on the for profit school industry a few months ago. Upon the announcement of the federal funding ban against ITT Tech, Warren took to Facebook to praise the move of the Department of Education. “ITT Tech failed, again, to meet the scandalously low standards of its accrediting agency but still sucked down a whopping $600 million in taxpayer dollars last year,” Warren wrote. “ITT’s free ride is finally over, and the message couldn’t be clearer: We will no longer stand by and allow these shady institutions to bilk taxpayers and cheat students.”

ITT Educational Services is facing lawsuits in various states, one notable plaintiff being the Consumer Financial Protection Bureau, which alleges fraud and faulty job placement rates. The Securities and Exchange Commissions (SEC) filed charges against ITT Educational Services in 2015 claiming that the company concealed its poor performance from its investors.

Communication with ITT Tech has gone dark. Contact information has been erased from the schools website. Students looking for answers are met with a message directing them to contact the Department of Education or the office of Federal Financial Aid. John B. King Jr., U.S. Secretary of Education posted a personal message to ITT Tech students with  information on  how to proceed at http://blog.ed.gov/2016/09/message-secretary-education-itt-students/

The Wall Street Journal recently reported that ITT Educational Services got 80% of its cash revenue from Title IV federal aid, including Pell Grants and student loans, in 2015, according to securities filing.

441 students have banded together to start a student debt strike organized by Debt Collective. A letter was posted online addressed to King and President Obama that included the following statements.

“Each of us is still left with tens of thousands of dollars of debt to you, the very agency that was supposed to have protected us from ITT’s scam.” The letter goes on to say “We trusted that education would lead to a better life. And we trusted you to ensure that the education system in this country would do so. Instead, each month you force us to make payments into an immoral system that profits from our aspirations. This is a profound betrayal.” The displaced and disgruntled students add “These are debts we cannot pay and should never have been forced to. Erase them now. Return what we have already paid. Our debt strike will continue until justice is served.”

“I’m a former member of the Missouri Army National Guard. I owe $165K in student loan debt. I owe as much as if I owned a house. ITT never told me that a portion of my loans were private loans. They never told me I would also have to pay $5,000 out of pocket to graduate. They also took my state tuition assistance money,” says Joseph White of Missouri

“I was preyed on because I was low income and had kids and was desperate for change. The lady said all the right things. Come to find out that employers where laughing at my degree because it was from ITT tech. I have not seen a tax return in over 13 years. I owe double, almost triple on my student loan than I did when I finished school.” Laments Kelli Young from Arizona.

While many are focused on the students and their loans there is another group of people significantly affected by the school closings. 8,000 employees now no longer have a job and means of supporting themselves and family. 136 campuses in 38 states closed with no warning. While there is a process for students to attempt to regain their lives, there is no recourse for these employees who now have to figure out what now.

This story is very personal to me, 10 years ago a for profit school situation changed my life. 10 years ago this month my last “job” ended which led to my self-employment. It was not my intention to start my own business ten years ago. I had been an administrative assistant for two years at Harrison Career Institute, a medical training school that had campuses in 13 states. One day without warning in July it was announced that the school was closing all campuses amidst allegations of accreditation issues and fraud. All of my coworkers were immediately dismissed, I being the only administrative staff, stayed on for 3 months to get all the paperwork together and assist former students.

Job hunting was such hell that I ended up starting my own business while on unemployment. It was nearly impossible to explain to prospective employers that I could not put them in contact with my old employer, any staff, that the business had disappeared. Luckily ITT Tech is such a known name that this is mainstream news and it may be easier for these employees to find new employment.

For more information on the debt strike http://ittstrike.com/

For more information on the closure, credit transfer and webinars go to https://studentaid.ed.gov/sa/about/announcements/itt