As Browns wide receiver Josh Gordon decides to go to rehab, Cleveland has decided to pursue a future that does not include him.

The Browns have intentions to part ways with WR Josh Gordon.

Gordon has been serving a four-game suspension for multiple substance abuse violations set by the NFL.

Josh Gordon recently announced that he will be checking into a rehabilitation facility in an effort to “gain full control of my life.” Gordon was eligible to play in week 5 against the New England Patriots as part of the terms of his suspension. Gordon’s decision to go to rehab has put his comeback on hold indefinitely.

“After careful thought and deep consideration I’ve decided that I need to step away from pursuing my return to the Browns and my football career to enter an in-patient rehabilitation facility,” Gordon wrote on Twitter.

“This is the right decision for me and one that I hope will enable me to gain full control of my life and continue on a path to reach my full potential as a person. I appreciate the support of the NFL, NFLPA, the Browns, my teammates, my agent and the community through this extremely challenging process.”

“We support Josh in taking this step to seek additional help and treatment,” Sashi Brown, Cleveland’s Executive VP,  wrote in a statement. “His singular focus must be on his own health. We want nothing more than for Josh to be successful personally and professionally and will not comment on his status with the organization at this time.”

“Cleveland is my team. That’s where I want to be,” Gordon said. “I’m happy to be with Cleveland.”

Gordon has been in and out of trouble since 2013, proving to be unreliable for the Browns. He did not play at all in 2015 due to suspension. Gordon also was arrested in Raleigh, SC 2014 for a DWI, when he had blown a .09. The legal limit in South Carolina was .08 for Blood Alcohol Level.

Cleveland is off to a 0-3 start this season. Browns wide receiver Corey Coleman will be out for three to five weeks due to a broken hand. The Browns have struggled and will have to wait it out to gain some much-needed help.

Author
Michael Daws
I love sports, current events, and anything outdoors. My days are filled with writing, hanging out with my daughter, and working on airplanes. I also enjoy eating. A lot.
Previous Article

When Did Not Participating In The National Anthem Become A Crime? 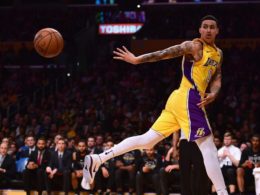 Jeremy Lin Added to the All-Star Lineup, Will Play in the Rising Stars Challenge and Participate in the Slam Dunk Contest

The pressure to add Jeremy Lin to this year's all-star festivities was so immense that David Stern had to let him in. He will be playing in the Rising Stars Challenge and also participating in the Slam Dunk contest.
byBrennen Jones