29 Celebrities And Notable Figures We Lost In 2016

2016 has been a sobering year as I look back at the celebrities and notable figures who left us this year. Here we remember 29 who touched our lives.

2016 has been a sobering year as I look back at the celebrities and notable figures who left us this year. Some of their deaths hit the nation hard, like the recent death of journalist and anchorwoman, Gwen Ifill.

Other deaths rocked the world, like the accidental overdose Prince suffered at his home in April.

There’s no way I could pay tribute to the over 100 celebrities, dignitaries, and notable figures who passed on this year but here, we remember 29.

They each made an impact on the lives of millions and will be greatly missed.

2016 Presidential Election: Why I Didn't Vote

Just when Jussie Smollett thought he was free and clear of controversy, a new video captures the Osundairo brothers in some type of action and it’s raising a few eyebrows again.
byTUT Staff

Support is especially significant for those in Hollywood who aren’t big-name stars, including backstage workers like hairstylists and makeup artists.
byBien Luigi 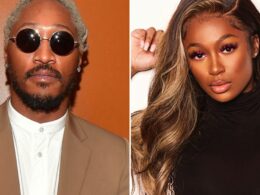 Future loves spoiling the women in his life, and once you see her with the AP, you know it’s real.
byBien Luigi