You can now watch Ava Duvernay’s 13th on Netflix without a subscription. The information in this film is too valuable to keep from people. Have you seen it?

In October of last year, I watched Ava Duvernay’s “13th” on Netflix and it changed my life. I am a staunch advocate of the phrase “a child educated solely in school is an uneducated child.” Duvernay’s documentary “13th” is a clear example of why that statement holds weight.

In school, we are taught about the constitution its amendments. The 13th amendment is often hailed as the saving grace of Africans in America. In the 13th amendment, President Abraham Lincoln gave the right of freedom to those of the African diaspora who had previously been held captive in slavery. While some think Lincoln was a good man who wanted what was just and fair, many of us know it was just politics.

The 13th amendment did not actually abolish slavery, however, as in many political battles, all it did was change the way slavery was perceived. The 13th amendment stopped what had become race based slavery (which started as indentured servitude and had no racial motives behind it) and made slavery legal only for those convicted of a crime.

The 13th amendment to the United States Constitution says the13th amendment to the Constitution declared that “Neither slavery nor involuntary servitude, except as a punishment for crime whereof the party shall have been duly convicted, shall exist within the United States, or any place subject to their jurisdiction.” What Lincoln did is say that only criminals could be used as slaves, which we later saw through chain gangs and now the prison industrial system that produces many of the products we use daily.

Duvernay’s “13th” takes a real look at the school to prison pipeline as well as explores that methods that have been used by various presidential administrations to lock up more people. The more people in jail working at slave wages, the fewer jobs are available for the everyday citizen on the street. Companies such as WalMart and Victoria Secrets have been called out for selling products made by inmates in the past.

When I say these prisoners are working as slaves it’s apparent in their wages. The average prisoner makes as little as $0.12 to $0.93 cent per hour. Some high paying federal prison jobs pay as much as $1.15 per hour for jobs that would pay on a scale from minimum wage to over $13.00 per hour for furniture makers.

Following the release of “13th” on Netflix, the network doubled down with a sit-down chat between Ava Duvernay and Oprah Winfrey to further discuss the problem with legalized slavery. Now Netflix is taking its mission to educate and inspire through “13th” to a new level. Netflix is a streaming movie and television platform, you can’t walk into a store and buy any of its original content on DVD. You can’t even download to watch at your own leisure. In order to enjoy anything streamed through Netflix, you needed to have a personal account

Netflix is allowing “13th” to be screened publicly as long as it is watched in group setting. This is huge, it’s indication that Netflix and Duvernay feel the information in this documentary is so invaluable that people shouldn’t miss it just because they don’t have a subscription. I hope you understand the significance of this. What is happening in this society to bolster the prison community affects us all. The bills being passed in the name of “law and order” are smoke and mirrors to a much more sinister plot to keep slaves of any race working in America.

As I often try to tell people, we do not have a race problem in America, we have a class problem. The 1% owns the banks that lend to the government to build prisons then they invest in the prisons and products coming out of it too. For them, it’s just more money and those beneath them are disposable.

Relevant Magazine named “13th” as one of the most relevant pop culture releases of 2016, the documentary is nominated for a Best Documentary Feature Oscar this year.

We have been overwhelmed and inspired by the response to 13th from people of all ages. Communities across the country are feeling the full weight of this particularly divisive moment in time. And, when some are capitalizing on this fear, we are especially inspired by the next generation, who are able to acknowledge the complex system they have inherited while simultaneously vowing to change it. Like DuVernay, they understand that we must come face to face with our past before we can fix our future.

“13th” can now be screened for groups in public settings such as coffee houses, libraries, schools, churches and community centers. It’s an amazing thing on the part of Netflix to play such importance on something the media refuses to report on since it’s owned by the same people who own the banks and invest in the prisons.

13th has won 15 awards thus far and has been available for less than a year.

Sammy Sosa Compares Steroid Allegations to the Persecution of Jesus 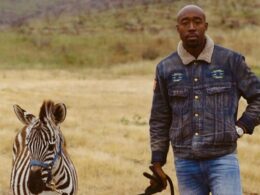 Freddie Gibbs Are All Jokes On Being Banned From Instagram

For the nature of his posts, this apparently wasn’t Gibbs’ first time being kicked off the platform.
byBien Luigi

This diversity outreach program was launched in partnership with the White House Initiative on Historically Black Colleges & Universities.
byChristina Jeter

Kim Kardashian's Paper Magazine cover has attracted some negative and positive reviews. In this article, I tell what both sides say and tell you my view.
byCiera Seal

Celebrating Byron Allen, the Most Underrated Man in Black Entertainment.

This Black History Month, we celebrate Byron Allen. With over 30 years in the entertainment industry, the media mogul is worth an estimated $300 million.
byMelony Hill