Social Media is Asking, Where are the Girls? Is There a Spike in Missing Black Girls in Washington, DC?

All eyes are on Washington, DC as missing persons fliers for young Black and Brown girls seems to spike. Police say no spike, just a new awareness campaign.

If you’re like me, you’ve been on social media for the last 24 hours inundated with Black celebrities and activist demanding that mainstream media pay attention to the rising number of Black and brown girls who have gone missing recently in the nation’s capital. 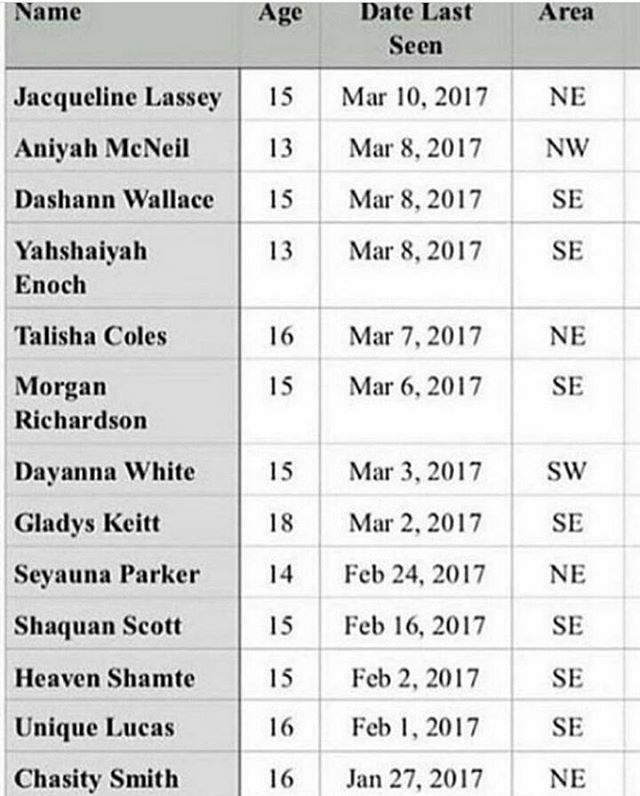 It’s being said that up to 25 Black and brown females have mysteriously disappeared in the last 30 days. I live 45 minutes away from D.C. in Baltimore, and I can tell you, we’ve been dealing with it here as well. There have been accusations of human traffickers involved as well as some indication that gangs were involved in some of the disappearances.

A special needs girl from Baltimore went missing after school last week. She was found the next day, quite far from home, in an apartment with a man unknown to her family that she may have met on a dating app. The apartment she was found in was located in P.G. County, a suburb right outside of D.C. Joanna Clark and her 15-year-old daughter both went missing here in Baltimore last month. Joanna has six more kids at home. It’s unlikely the two just up and ran away.

In speaking on the subject of the missing girls, Robert Lowery, Jr., vice president of the Missing Children Division at the Center for Missing and Exploited Children said, “We see that girls run away more frequently than boys and young people in foster care homes face heightened risks.” He went on to say, “They may be fleeing an abusive situation or have been lured away by an adult offender,” he continued. “Sadly, even if they’ve left of their own volition, they’re very vulnerable to the dangers of child sex trafficking or gang activity.”

While there seems to be a spike in the amount of women and girls who had disappeared in D.C. recently, the Metropolitan Police Department recently tweeted, telling the public that these numbers are normal. “There isn’t a spike in missing people in D.C., we’re just using social media more to help locate them. Sorry to alarm you,” the department’s twitter feed read.

If the idea of 25 missing women and girls in D.C. seems startling to you, take into account that in February 2017 FBI data showed that there were 13,591 missing African American women. 8,042 of them were under the age of 18.
The Metropolitan Police Department has been receiving incessant phone calls and social media messages asking what the public can do to help bring these missing girls home.

The best thing they can do is share the missing persons fliers to help us locate them. We appreciate your interest in assisting us. https://t.co/uv0DoAtEkN

The National Center for Missing and Exploited Kids has actually started to use social media to directly interact with celebrities bringing attention to the missing girls. One such wet was sent to actor/musician, LL Cool J. 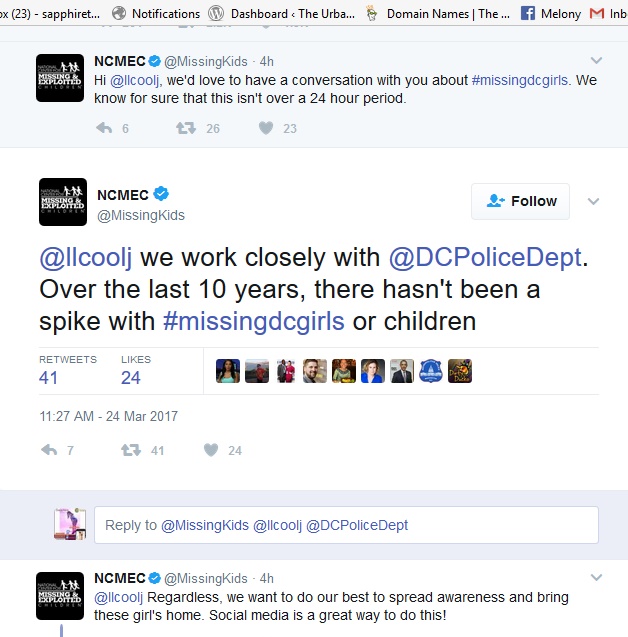 While many are incorrectly assuming that these girls suddenly went missing overnight, it is not the case. Social media has been pushing the idea that all of these girls disappeared in a matter of hours or a day or two. This is not the case. In fact, there are less girls missing in the country than there were a few years ago. The increased numbers being reported are nothing more than a new way of reporting these cases of missing persons. 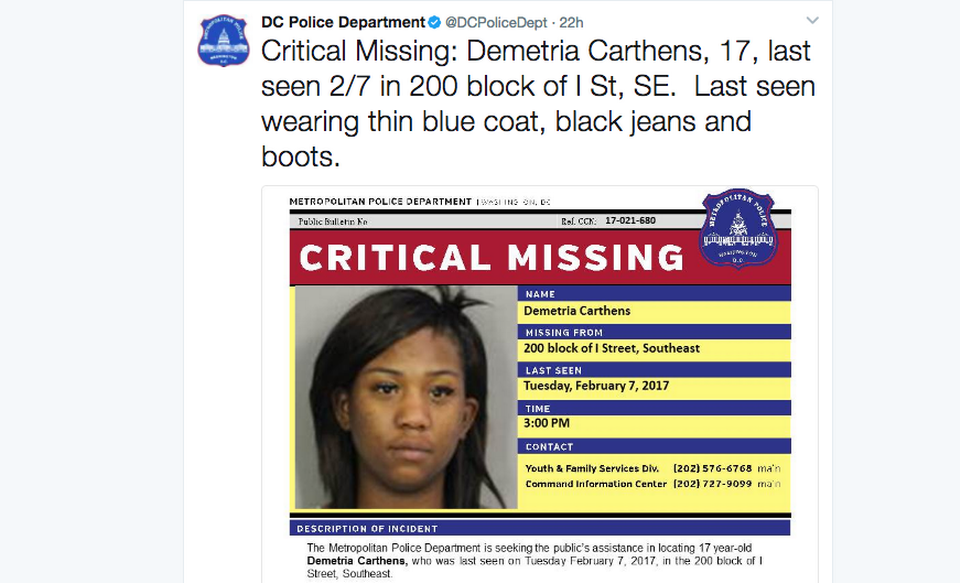 The Metropolitan Police Department’s DC Police Youth and Family division has a new leader, Chanel Dickerson, who has employed new methods of raising awareness of the missing girls. “I just want to create some program and get assistance from the community to try and engage this population to let them know they’re valuable to the community and respect their bodies and their mind,” Commander Dickerson has said.

Meanwhile, the hashtags #DCGirls and #MissingDCgirls have been posted in abundance on social media. At the time of this writing, DC has a reported 38 open missing persons cases, 18 cases involve girls under the age of 18.

The biggest problem that has plagued many of us as we realize how many young girls went missing in the D.C. area, is the lack of public outcry. There are many, like myself who notice that when a little white girl or boy goes missing, Amber alerts are sent out. We are furious that the majority of these disappearances are treated as runaways when reported. The whole idea that Black and brown girls are simply runaways and not the victim of something far worse, is preposterous.

There should not be any difference in how these missing children cases as reported, publicized and handled.

With so many missing girls, one can get suspicious of the motivation behind it. Are these girls just runaway? Is it possible that they’re hooked up with someone off a dating app? Were the kidnapped and forced into human trafficking? I’m sure there is no one answer that applies to all of these girls. However, we need to start figuring out what happened to each one. We can’t let them keep disappearing and becoming hashtags.

If you have any information that can help the police find any of these missing women in D.C. or across the country, contact the National Center for Missing & Exploited Children Hotline: 1-800-The-Lost