Rachel Dolezal is back in the spotlight after a brief but well-deserved stint in obscurity. Delusions, spray tan a la “Willie Wonka”, and seasonless fried chicken aside- she’s a problem.

The black delegation needs to put a stop to this bullshit “expeditiously.” in my Joe Clark voice

We’ve nobody to blame but ourselves.

Here are four reasons her “trans-blackness” is our fault:

4. She was invited to one too many damn cookouts.

It’s a perpetually never-ending conversation. Nkechi Amare Diallo (shout out to my Igbo peeps better y’all than the my Yoruban peoples) a.k.a. “Becky with the bad wig” was given a pass to multiple cookouts because she majored in African- American studies. I guess being from MONTANA wasn’t a dead giveaway to the bullshit. And these goofy ass black dudes, apparently, picked up what she was putting down. We are easily impressed by “down ass white folks”. I’m convinced she showed up with a runny ass casserole of some sort and a well-prepared speech on how welfare destroyed the black family.

Because it, directly, affected her. “Claudine” is loosely based on her life. insert eye roll

Can somebody tell her and Gary Owens to get the ENTIRE offbeat hell on?

3. We Act Like The One-Drop Rule REALLY Makes Her Black

Allegedly, Rachel Dolezal never stated that she was black because she was born “biologically white”.

I blacked out. No pun intended. Really. She throws her students under the bus by saying they said that she had to have some black in her somewhere.

Insert “one drop rule” here. Nice try, Rebecca. Unfortunately for her, this rule has nothing to do with race and everything to do with white slave masters not wanting to distribute their wealth to their bastard products of rape. Because God forbid, they treat their black chirren like their precious, white chirren. Again, this ALL leads back to alabaster ass Montana. 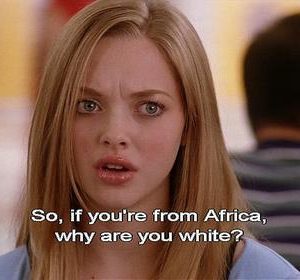 2. We Were Too Nice To Her At Howard

Rachel showed up at Howard all “Amber Lynified” and we were kind to her. We brought her into the sister-girl fold when she should have been receiving the sidiest of side eyes. We should be suspicious of white folks who CHOOSE to go to HBCU’s given their history. On top of that, she sued the university for discrimination.

Have a seat, Rach. We take in ALL of the strays. I swear.

1. We regurgitate the “race is a social construct” rhetoric to our detriment.

So Rachel gets to be black because black isn’t really black unless the cops are kicking our asses. Riiiiiiiiiiiight! This whole race is a social construct is convenient for folks who aren’t on the fucked up end of oppression.

Rachel Dolezal has more than overstepped her boundaries but she isn’t entirely to blame. Black folks have had a reputation for taking in strays since the beginning of our journey in this country. And this one is no different!

White People Were Mad At The All-Black Cast Of ‘The Wiz’: Oh The Irony!

It Would Be A Tragedy If You Didn’t See A24’s Trailer For “Macbeth: The Tragedy” Starring Denzel Washington And Frances McDormand

Will You Be Able To Get It? COVID-19 Booster Dose, According To Johnson & Johnson, “Dramatically Increases Protection”

Would You Let Your Baby Sleep In A Cardboard Box? It's The New Trend.