Prodigy (born Albert Johnson) was one-half of the hip-hop duo Mobb Deep with rapper and producer Havoc. He died at age 42.

Prodigy and Havoc as Mobb Deep

Vivid yet brash, bold yet robust, and profound yet poetic. These are just a mere few words to describe the lyrically gifted Albert “Prodigy” Johnson.

Born in Hempstead, New York, Prodigy was unknowingly destined for greatness. Descending from a musical family, Prodigy inherited his musical roots from his grandfather, Budd Johnson, and his great-uncle Keg Johnson who were notable for their contributions to the Bebop jazz era. In addition, his mother, Fatima was a member of the Crystals, while his father, Budd Johnson Jr, was a member of a Doo-wop music group the Chanters.

As an infant, Prodigy was diagnosed with a severe form of sickle cell anemia, which is a blood disease marked by debilitating spells of bodily pain. Despite this, his ailment didn’t stop him from contributing to reforming hip hop in the 1990s.

In 1991, at the age of 16, the future hip hop pioneer joined Jive records, under the alias Lord–T (The Golden Child). Soon after he landed an appearance on 90’s R&B group Hi Five’s single “Too Young”. The song was featured on the Boyz N The Hood soundtrack. In high school, he met Kejuan “Havoc” Muchita. The duo soon became The “Poetical Prophets”, before becoming “The Infamous Mobb Deep”. 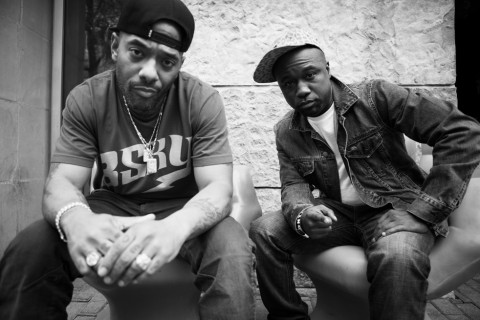 Prodigy and Havoc as Mobb Deep

Mobb Deep saw their first major success with their second album, The Infamous, released in 1995. Havoc and Prodigy catapulted to the top of the hardcore hip-hop scene with their dark, yet straightforward narration of street life. In this album, Mobb Deep vividly portrayed the struggles of living in New York City’s Queensbridge Houses where Havoc grew up. Following the release of The Infamous, Mobb Deep became some of the most prolific artists of the East Coast. The hit single “Shook Ones Pt. II“, a remix to the hit Shook Ones, received critical acclaim as one of the best songs in hip-hop history.

Mobb Deep’s third album, Hell on Earth was released in 1996 debuting at number six on the Billboard Album Chart; the album continued the duo’s portrayal of harsh street life while further pushing them to the forefront of Hip Hop scene along with contemporary East Coast Rappers like the Notorious B.I.G., Jay-Z, Wu-Tang Clan, Big L and fellow prolific Queensbridge rapper Nas. Nas appeared on ‘Hell on Earth’ along with Method Man and Raekwon

In 1996, Mobb Deep appeared on the Red Hot Organization‘s compilation CD, America is Dying Slowly alongside Biz Markie, Wu-Tang Clan and Fat Joe among many others. This compilation was solely meant to raise awareness of the AIDS epidemic among African American men and this compilation was heralded as “a masterpiece” by The Source Magazine.

In 1999, they released the highly anticipated Murda Muzik, which had the majority of its songs unintentionally leaked. This resulted in delays in the official album release. When the album was officially released, it eventually debuted at number three on the Billboard 200 and quickly went platinum. Murda Muzik was further promoted by the popular and pioneering single “Quiet Storm.”

Shortly afterward, Prodigy released his long-awaited solo album H.N.I.C in which he collaborated with fellow hip hop artists such as B.G., N.O.R.E, and producers such as the Alchemist, Just Blaze, and Rockwilder. H.N.I.C also featured “You Can Never Feel My Pain”, a song which Prodigy referenced his suffering from sickle-cell anemia. This was the first time that he had done so in his career.

In 2001, Prodigy released a 2001 autobiography entitled, My Infamous Life: The Autobiography of Mobb Deep’s Prodigy. In 2011, he released a free EP called The Ellsworth Bumpy Johnson EP which is his first project since being released from prison. In 2013, Prodigy released his second collaboration album with The Alchemist titled Albert Einstein. On April 1, 2014, Mobb Deep released The Infamous Mobb Deep their eighth studio album. In August 2016, he released an untitled EP of five tracks, released in partnership with BitTorrent.

On June 20, 2017, Prodigy died in Las Vegas, Nevada after having been hospitalized a few days earlier for complications related to his sickle-cell anemia. He was performing in the Art of Rap Tour in Las Vegas with Havoc, Ghostface Killah, Onyx, KRS-One and Ice-T when he was hospitalized. The exact cause of his death is yet to be determined.

Following his death, tributes from many fans and fellow hip-hop artists alike poured in on social media. Heartfelt tributes from numerous prominent hip-hop figures including Havoc, Snoop Dogg, Lil Wayne, Q-Tip, Ghostface Killah, Ice-T, Drake, and The Game among others expresses how much Prodigy meant to them.

Steve Rifkind, the founder of both Loud Records and SRC Records, remembered Prodigy as “a pure lyricist who made some of the best hip-hop records of all time.”

Prez Harris leads us into the right direction with new single, “Wrong Side”