“I think music can be clean, and beautiful, and evoke feeling. We’ve got to bring back soul and love in music.”

Danii Roundtree is flowering into your next favorite jazz vocalist. The young singer has already graced the stage at the Atlanta Jazz Festival as well as with popular Broadway productions like Motown The Musical and Porgy & Bess. She was also a top 100 finalist on American Idol’s eighth season.

Now, Roundtree (and her background vocalists creatively named The Coco Puffs) are set to release her debut album, Memoirs, later this summer. Her band is dubbed the Retro Rebels.

In the meantime, The Urban Twist caught up with Roundtree (through an e-mail interview) to discuss her “retro” sound, performing at the Atlanta Jazz Festival on her birthday and how she she plans to make her music last forever.

When did you decide to be a singer?
I was a stage kid. My parents decided at 14 that they would send me to Dillard Center for the Arts to begin focusing on voice and acting. That began my journey as a vocalist.

How was it like to perform at the Atlanta Jazz Festival?
The show and reviews were amazing! It was an awesome birthday gift to share my talents on my special day on stage!

What is the message from “Memoirs”?
Memoirs is an album written from true life events. We all have that one love story that ends before it starts. And I just so happen to be a singer/ songwriter who documents through song. This album is literally a collection of my memoirs. All the records are personal.

What made you want to go with a “retro” feel?
The sound has a throwback feel that is Jazz-oriented with Funk and Soul elements; cleverly coined as ‘Retro’. I am a old soul but, still young and vibrant. So it only made since[sic] for me to be truthful with my sound bringing back the old school elements that I grew up on all while giving it a fresh new feel.

What inspired you to write “Crave”?
I was in love. It was a declaration of happiness and the euphoric feeling love brings.

What do you hope fans get from your music?
I want my Retro Kids to feel my music. Every time they come into contact with my artistry.. I want them to have an experience. The industry has changed so much. Especially musical content. I think music can be clean, and beautiful, and evoke feeling. We’ve got to bring back soul and love in music.

Who are some of your inspirations?
My late father 1st and foremost is my biggest inspiration. This all was his dream for me, and I am happy that I am walking into his vision he had for my career! Additionally, I love the greats… Nina Simone, Ella Fitzgerald, Sarah Vaughan, Billie Holiday, and Peggy Lee were the pioneers. I just hope to one day have a career as successful as theirs. They to me are originators.

You mentioned that you wanted to go into acting, what genre do you want to work in?
I have a degree in both voice and acting. I ultimately would love to venture into film and television, and transition back to theater later in my career.

What have you been watching?
Lately I’ve been watching a ton of documentaries on African American culture. I think it’s important for young people to really tap into their cultural awareness. I draw inspiration from it. Im[sic] proud to be a woman of color and connecting to my ancestry.

Who do you want to work with in the future?
Honestly, I just wanted to work with respected artists in the industry who have created classic content. Erykah Badu, Herbie Hancock, Chaka Kahn, Barbra Streisand, Stevie Wonder, Diana Ross, Harry Connick Jr, Tony Bennett, Michael Buble, and Elton John would be a dream list to start haha. I’ve always been obsessed with classic tunes… They stand the test of time. Thats the type of music I aspire to make over the course of my career.

Does J. Lo have a sex tape out there floating around for me all to see?  Who knows?…
byBrennen Jones 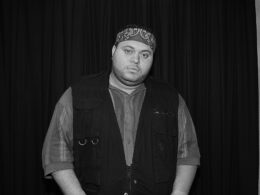 Gabby Sidibe shares how it is to work with big time stars and how she is never at a loss for work since her Oscar nomination.
byTrixie Burce

No matter how great of a man you are or may be, everyone has their faults and Martin Luther King Jr. wasn't any different.
byBrennen Jones