Curious George is the most popular monkey in the world. After a successful Kickstarter campaign by writer, producer, and director Ema Ryan Yamazaki to help raise the necessary funds to bring the film to life.

The Orchard has released the official trailer for Monkey Business: The Adventures of Curious George’s Creators.

“Since his introduction in the first publication in 1941, the beloved series has sold over 75 million books in more than 25 languages. Monkey Business explores the lesser-known tale of George’s creators, Hans and Margret Rey.”

Set to release On Digital and On Demand August 15th, the film tells a heartwarming story of how the Hans and Margret first meet each other when Hans was dating Margret’s older sister, years later they reconnected and married.  What I really enjoyed most about the documentary was the animation incorporated in the re-telling of the stories and historical images by Jacob Kafka. It engages a child’s interest in the film and yet reminds adults of the innocents that will never leave you!

Being German Jews, their lives encountered horrific change June 1940 when the Reys had to escape from the Nazis, a Curious George book was one of the few possessions they could smuggle out with them. After arriving in New York as refugees, they started their lives anew and over the next three decades, they created a classic that continues to touch the hearts and minds of children around the world.

I got a chance to shoot a couple questions to Ema Ryan Yamazaki, the Director of Monkey Business. 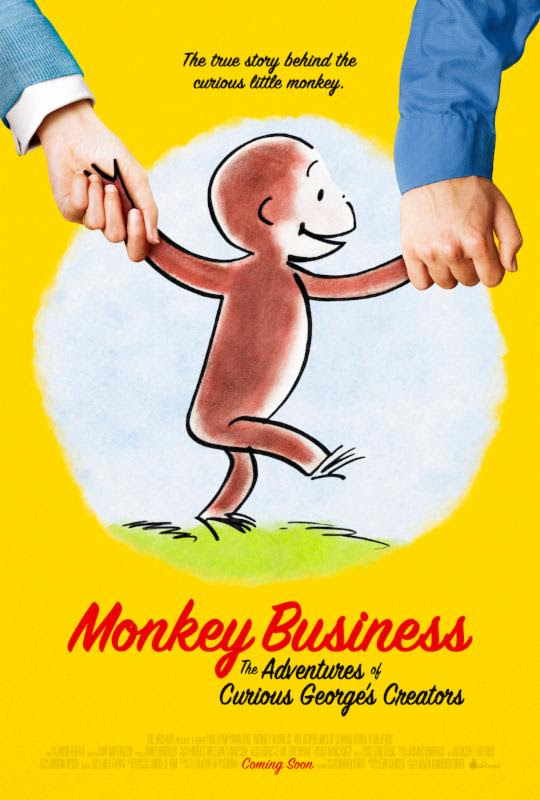 What inspired you to do the documentary?

I actually grew up in Japan and I read Curious George growing up, I later graduated from film school and was actively looking to do my first feature documentary. Someone had asked me do I know anything about them because they knew someone who ran the estate of ‘Curious George’. It was like one of those things where you get a chance to ask, who wrote these great children books? And I certainly hadn’t but I got to learn more about them. How they fled the Nazi’s on bicycles and I heard an interview they had done and they were clearly husband and wife and they were in-sync. They had these curious German accents, and it was enough for me to be curious. The more research I did I realized their story was incredible and I couldn’t believe no one did a film about them.

So I gradually decided to do the research, I talked to people that knew them when they were alive, visited the archives in Mississippi where there are all these journals, letters they wrote to each other, original artwork and things like that helped me learn about them, who they were as people and how their life experiences lead to why we have this amazing character ‘Curious George’.

And I got obsessed and dedicated a little over 3 years to produce the film you just saw!

How did you come to partner with Jacob Kafka for animation on the project?
He and I went to NYU Film school together, actually, the core of the film team that made the film with me were all recent graduates of NYU and that is where I started the film. That is a big reason why the film was possible because I got to work with my best friends who were as passionate as me discovering the story, with no funding. But Jacob was the star animator of our graduating class and his style of animation was already in that what you saw, hand drawn and heart warming. And he also always loved ‘Curious George’ so together we decided that we would develop this style that was very much inspired by the Curious George authors, that created this amazing illustrated world.
And so we combined that with Jacob style and we came up with a new style, by integrating the question through out the creation of the film process, “how would the Hans tell their story?”
—
Monkey Business is out today!
Share
Tweet
Share

Elizabeth Abbott is a Woman Of History Everyone Should Know About

Report: Michael B. Jordan to Star in ‘Matrix’ Reboot

The new Batman Trailer has finally been released and has some severe "Occupy Wall street" undertones.
byBrennen Jones

We sit down for a Q&A with Robb Skyler, who portrays iconic sports broadcaster Howard Cosell in "Hands Of Stone." He explains how he made the leap from touring the comedy circuit to becoming an Actor.
byChristina Jeter

You have met Rey, Finn, and Poe, but what about some of the other less than noble characters on the build up to "Star Wars: The Force Awakens?"
byChad Mitchell