Lebanon-born and Montreal-raised Jade has all the ‘The Mortal Instruments’ to become my faerie-knight and shining armor.

“Shadowhunters” is based on the international best-selling book series “The Mortal Instruments.” The show takes place in Brooklyn, New York, where a teenage girl named Clary discovers that she is descended from a line of Shadowhunters (humans with angelic blood who protect the world by hunting demons). After her mother is kidnapped, Clary joins the Shadowhunters on a journey to find herself and learn more about her own past.

Jade plays Meliorn, a faerie-knight, who is described as handsome, elegant, and equal parts angel and demon. The second half of season two premiered on June 5, 2017.

Did you read the book, ‘The Mortal Instruments’ to prepare for your role as Meliorn on Freeform’s “Shadowhunters”?

I did! And I became a total fan boy. I left out the last (6th) book because I was told by the fandom to go read the prequel series The Infernal Devices before finishing the Mortal Instruments. Also, I didn’t want to end the series too soon. Want to keep some goodies for when I’m craving it again. We’re not quite there yet in the show, so I’ll go back to it when we get closer. I wanted to read as much as I could so I could be immersed in the mythology of that world.

What have been some of your favorite filming locations for the show?

Oooh! It has been outdoor locations. Shooting in a forest is always a lot of fun. There was one episode we shot outside the “institute” and we were in the middle of a very busy street in downtown Toronto. People were stopping to snap pictures because we were all dressed in epic war gear. There was a big group of Faerie knights with armor, spears, hair and everything, and a big group of Vampires and Werewolves. Something you don’t see every day in the city.

Have you been able to keep any of the costumes and/or props that your character uses?

Hahaha! I wish!! I want it all. The only thing I got to keep was a silver chain necklace that they made me. I had come into the first fitting in season one, and I had a crystal around my neck, as I often do. The costume ladies loved it and added it to the costume. But they said: “We’ll make you a new chain”. I still love it and wear it every day.

Have you taken more of an interest in music since being a part of “That’s My DJ” as Sam?

Oh, music has always been a huge part of my life! And I love being in a recording studio. I’ve played around producing some pop music with friends. If anything it made me even more obsessed with that world. Everyone can watch That’s My DJ season 3 on YouTube for free!! The entire season is only 34 minutes total!!

Since you are from Canada can you speak French?

Mais bien sûr! Yes! I grew up in Montreal most of my life and went to a French school for most of it!

What got you started in acting?

I discovered that it was a possibility to do this as a career in the world when I was about 10. It seemed like the most exciting, as I loved movies and TV shows so much. I joined a community theatre group and the first time I stepped on stage in front of an audience, I felt such incredible creative energy through my heart, felt like I saw my life unfold in that moment. I knew that feeling would be a guiding force. Followed it ever since and it’s been great.

What comic are you currently reading?

Ooooh, nice question!! I need to find myself a new graphic novel to delve into. But right now I’m following Buffy the Vampire Slayer / Angel season 11!! The story continues!!

Who would be your dream designer to dress you for red carpet events?

Any plans to write, produce, or collaborate your own music album?

What are your social media links?

Jade can also currently be seen in the web series “That’s My DJ” as Sam. Each season of “That’s My DJ” follows a different character within the electronic music scene in Toronto. From heartbeat to heartbreak, chasing dreams and chasing highs, it’s an unapologetic look at music, cliques, and artists all trying to find their place within the new order of rave. Sam was first introduced in the season and is the focus of the third and final season which premiered on July 7, 2017.

Check out these trailers so that you can plan your summer movie nights.
byMoe N. Reed

Lil Wayne's deposition video may prove that he's the most arrogant rapper of all time.
byTUT Staff 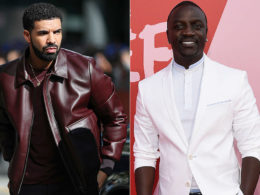 “Out of all the artists today, to me, [Drake] is worth every single f*cking penny. Every single penny. That motherf*cker’s a genius, bro. It’s revolutionary what he’s done,” he says.
byBien Luigi