When you look at how Black festivals have been discouraged, downsized and basically under sponsored in every area its hard to ignore the dichotomy. The festivals where the audience is predominantly or more than 60% white, gets the money, advertisement and attention.

Growing up in Baltimore, there were a standard set of festivals that I could rely on every year. I couldn’t wait until school ended and the summer months stretched ahead, each month was full of cultural enrichment or art in every format. I tried to attend every festival, in fact I still do.

As a treat, my grandmother would often take me to different festivals in the Maryland area, she even dared the “unwelcoming” parts of Maryland, taking me to Annapolis for the Kunta Kinte Heritage Festival a few times. As a child, I’m sure it must have looked larger than it really was, perhaps back then it was larger. The late 80’s and early 90’s was a time of great pride in African American & African Heritage, perhaps Black people flocked to Annapolis in droves. 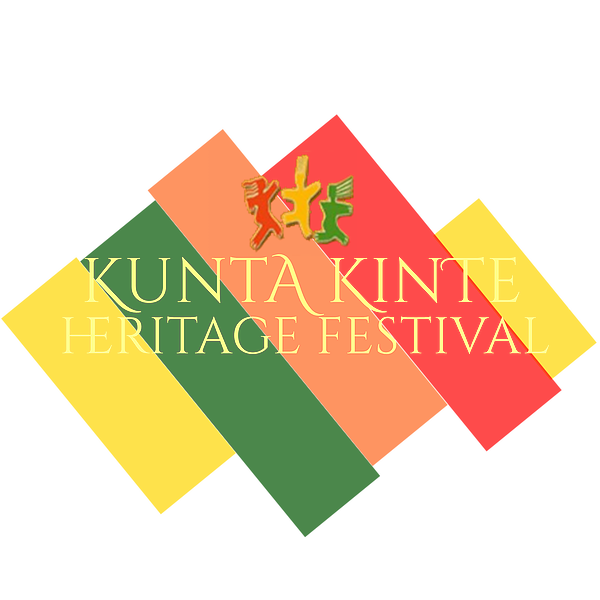 However, that was not the case this past weekend as I left Baltimore and traveled to Annapolis for the Kunta Kinte Heritage Festival to pic up My press pass, which turned out to be useless. 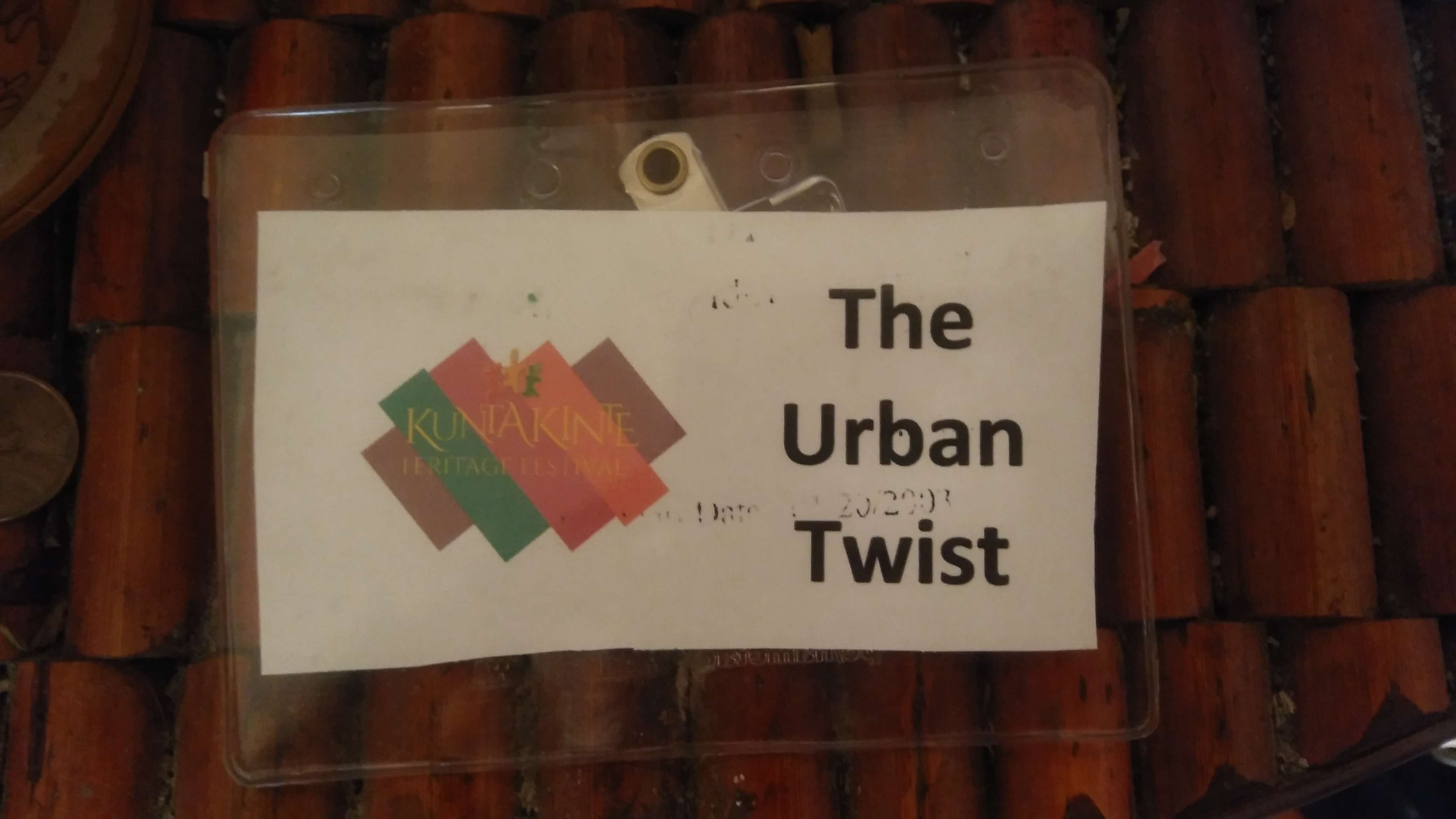 Annapolis is the capitol of Maryland, on the waterfront, it’s also home to the port where many slaves where many Africans were brought into America on slave ships. Kunta Kinte was one of the slaves brought in through the Annapolis port, that is why his great, great, great grandson, Alex Haley, who told the story of Kinte’s family, is honored with a statue there.

As we got closer to the waterfront, where the festival will occurring, I lost hope that this would be an epic day. The first thing I noticed as we approached the water near the traffic circle, was a group of white people taking pics with the statue of Haley. Staying optimistic, we looked for a place to park. As we circled the community for 25 minutes looking for parking, we noticed residential parking signs on nearly every street. The signs said that you couldn’t park on the street any longer than 2 hours without a permit. The city has one large public lot, we parked on the upper level, which luckily had space. By the time we left the parking garage was full.

Walking through the waterfront area, we were confused as to where the festival was, there was no signage along main street, no signage near the status of Alex Haley, no signage in any visible place. As we walked, we finally saw that towards the actual dock, removed from the busy activity and hundreds of people on main street, was the festival.

Upon walking into the festival area, disappointment immediately started to set in. There was a vendor’s area set up near the front, you walked through them before reaching the welcome table. At the welcome table sat three women volunteers, non-smiling and looking like they were forced to be there. There was no activity in the opening area, no festivities. A banner welcomed you, but otherwise, there was no indication that there was a celebration happening. 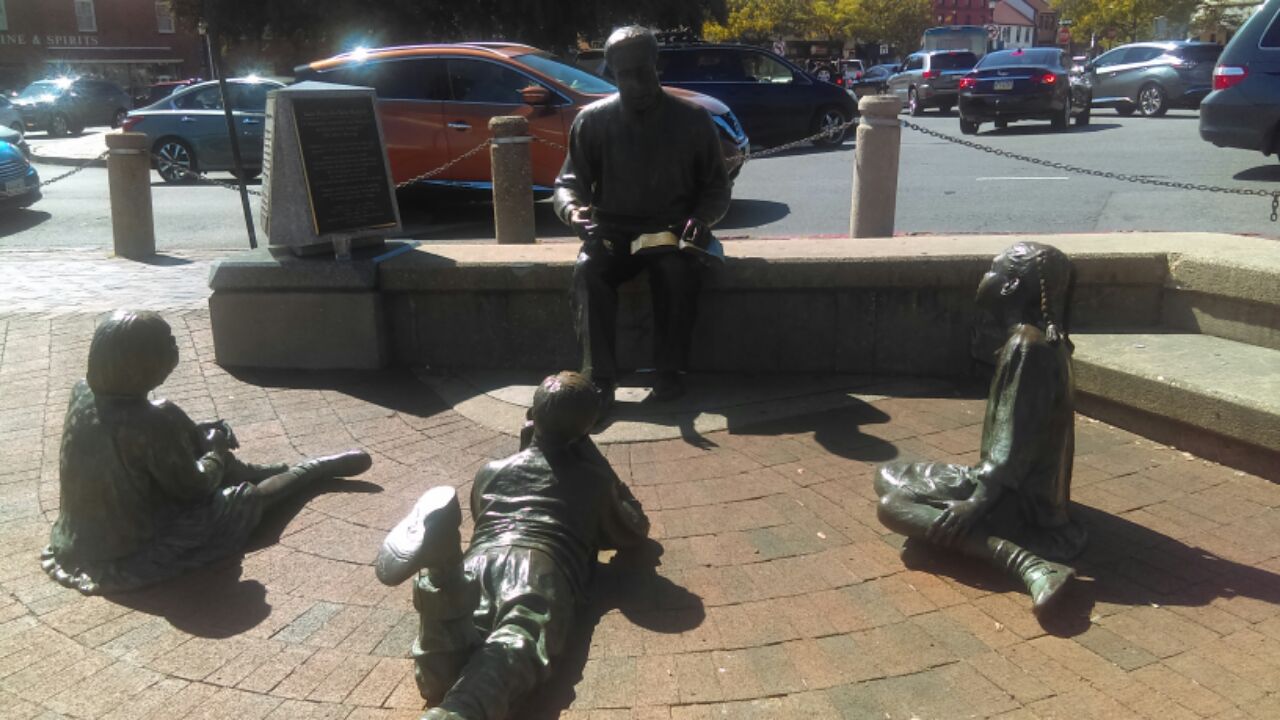 The allotted area for the festival was larger than the people who filled the space. I tried to not feel discouraged. I was hungry, I didn’t leave before I left the house because to me, festival means food. I just knew I’d be able to get some authentic African food, my heart was set on Samosas particularly. I couldn’t believe my eyes when I entered the food vending area. There were so few food vendors that other vendors were actually set up there. In fact, there was so few food vendors that there were only 2 actual food trucks. Besides the two food trucks, there were three food stands, one from a local church and another selling some African and some Jamaican cuisine. Other than the stand with the basic African and Jamaican cuisine, there was no other cultural food. I ended up getting a rib platter at the Kunta Kinte Heritage Festival, I was mad but the food was good.

As far as entertainment, I was confused. I saw two stages advertised but try as I might, I only saw one. I’d hate to think I missed something but there was one visible stage and surely no music coming from any other direction. The entertainment was so-so, I can’t say it was bad because some of it was very entertaining, but there was nothing I’d tell people it’s a shame they missed, at least while I was there.

In fact, the entertainment highlight for me, was a group of senior citizen line dancers. Their spirit was so strong and beautiful, one of the women even had an oxygen tank. I loved it. Speaking of senior citizens, that was the demographic. I was hard pressed to find people My age or younger out enjoying the festivities. There weren’t many families. Not that everyone there was geriatric but the demographic was primarily 40 and up. 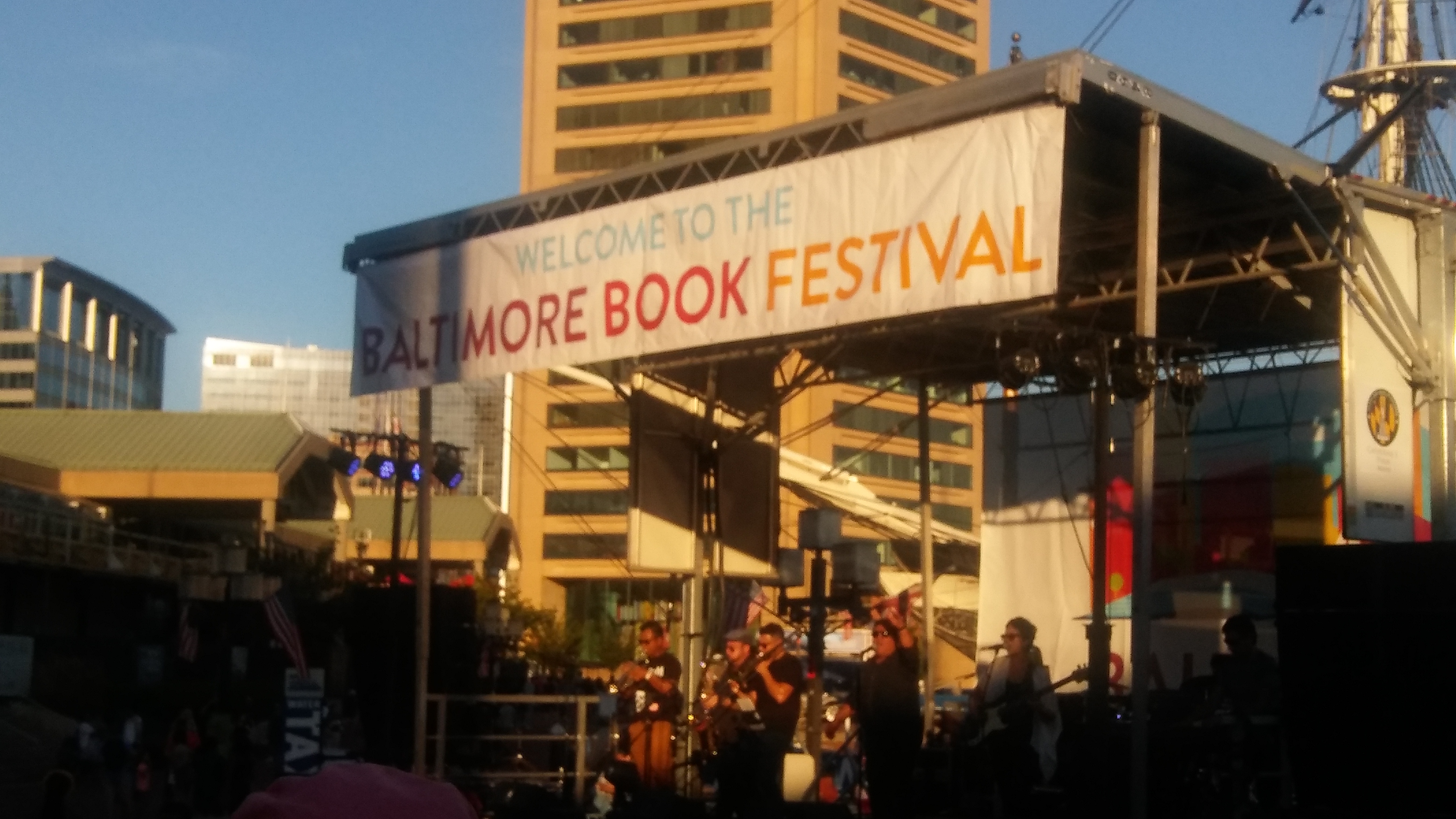 As I left the festival, which felt more obligatory than heartfelt, a client called and asked to meet with me in downtown. Baltimore. I agreed and arrived almost a full hour early. I had forgotten that the Baltimore Book festival was happening at the same time.

The Baltimore Book Festival, though always a popular local attraction, recently became a huge tourist attractions, and attracted a more diverse local audience as well. Until a few years ago, the festival had been in the Mount Vernon area, now it’s held at the Inner Harbor Baltimore’s biggest tourist area. There were thousands of people around the harbor, thousands, literally, of all race, age and nationality. 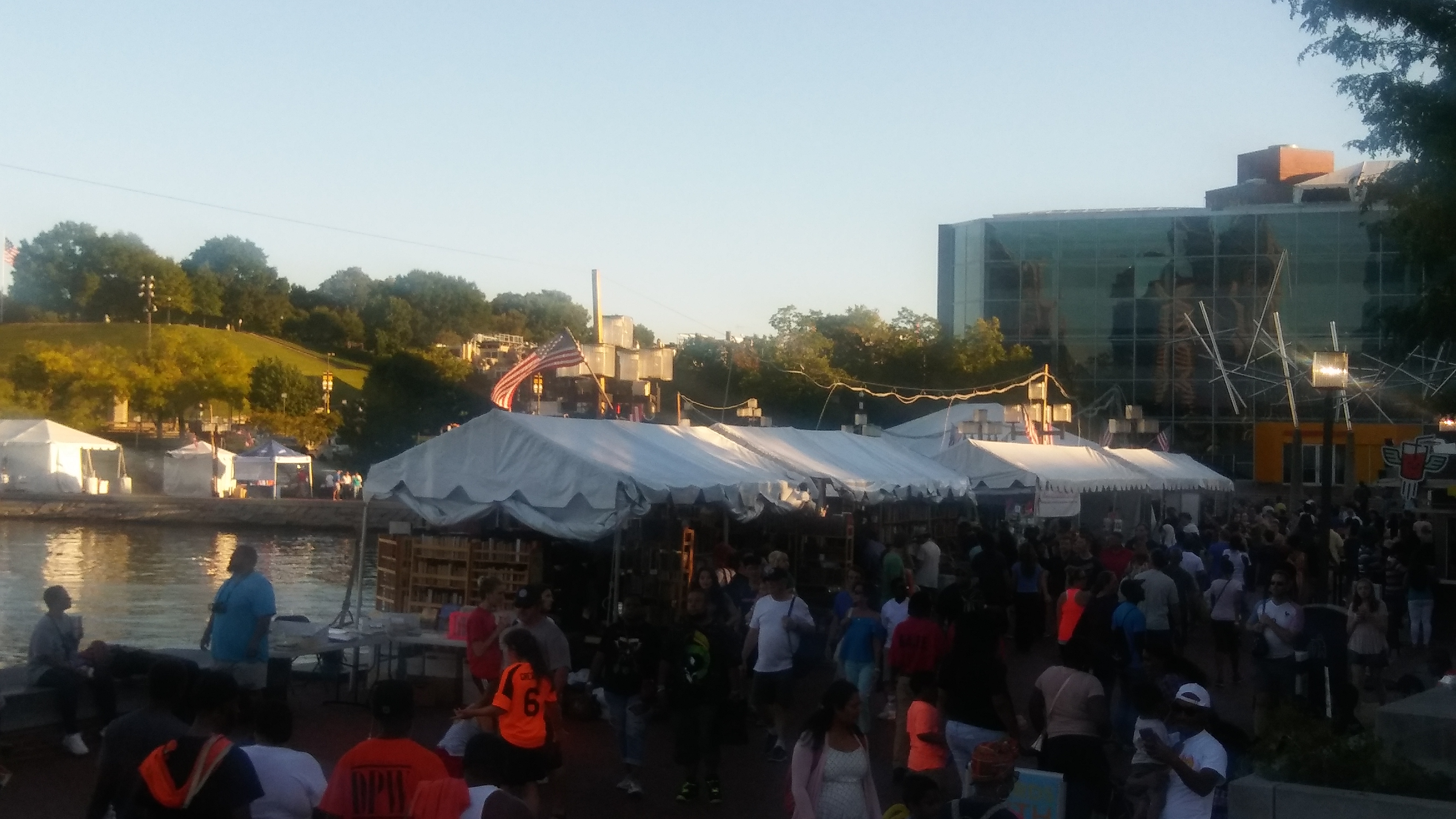 There was a food court as well as individual vendors along the festivals allotted space. The entertainment lineup was crazy. There were multiple stages, some for panel discussions, some for cooking demonstration, some for meet the author type things, poetry, and the main stage boasted non-stop entertainment. 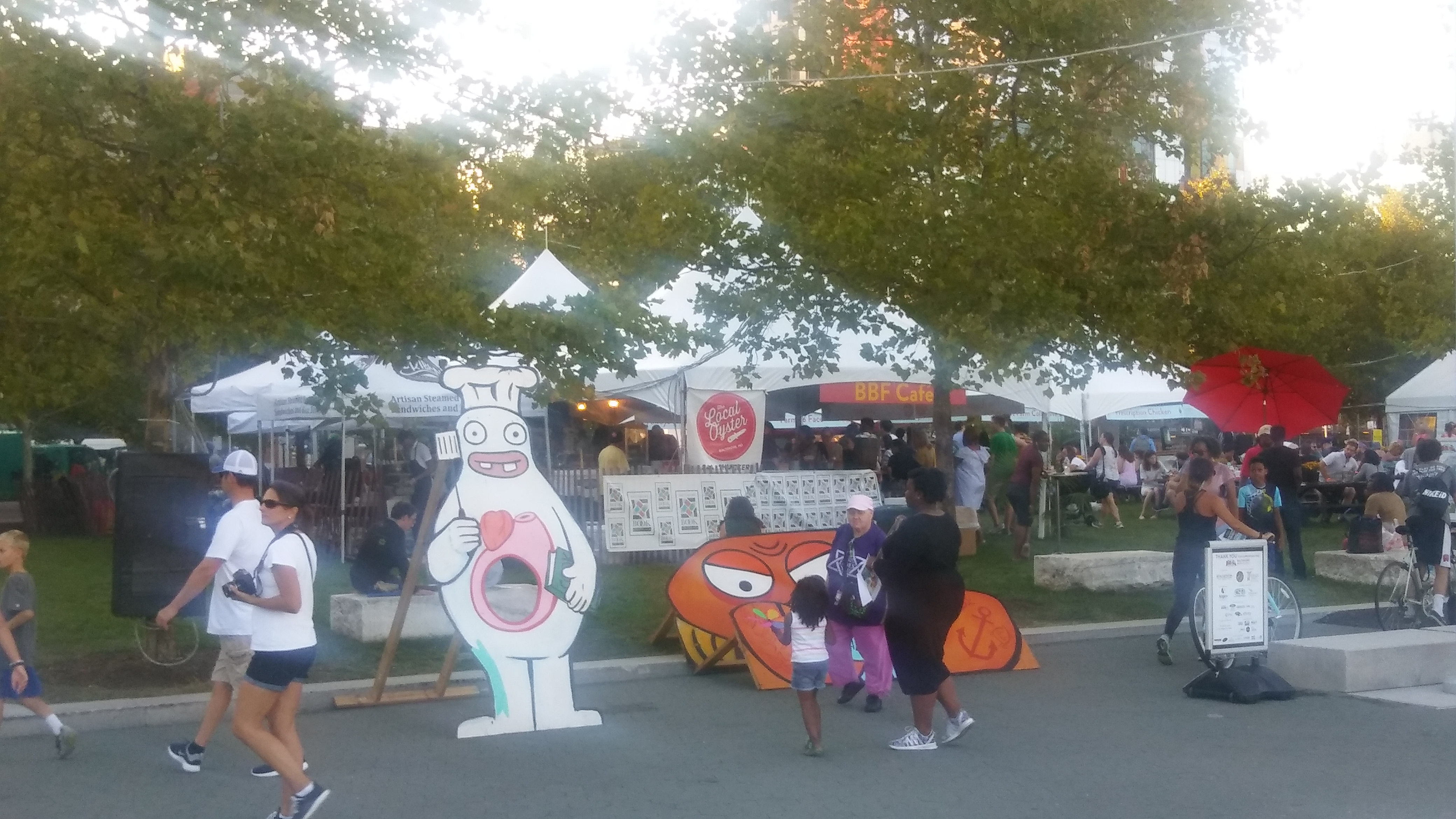 Surely, Maryland and it’s energy was focused on the book festival, hell more advertisement was done for Comic Con which happened this weekend also. As a Baltimorean, living in this cultural melting pot, it’s easy to forget that Maryland consists of so many counties and different areas, many of them predominately white.

Sometimes, you get disillusioned and think that there is total equality, which we know there isn’t. This summer we really felt it, the Black community already had to suck up the fact that they canceled the Stone Soul Picnic on us, this year, they downsized the Afram ( African American Heritage Festival), taking our mainstream talent from us, moving us to a new location out of downtown Baltimore and focusing on local talent. Most people, like myself, avoided the whole mess.

When you look at how Black festivals have been discouraged, downsized and basically under sponsored in every area its hard to ignore the dichotomy. The festivals where the audience is predominantly or more than 60% white, gets the money, advertisement and attention.

I was disgusted this weekend. Thinking back, days later, I’m still disgusted.