Hugh Hefner, businessman, media and cultural icon, and original “playboy” has passed away.

As the editor-in-chief and publisher of Playboy magazine, which was funded in part by a $1,000 loan from his mother, Hefner became the leading voice behind some of the most significant movements as a philanthropist and political activist. While advocating free speech and civil rights among others, Hefner also became the voice of sexual freedom. He departed this life peacefully on September 27, 2017, at his home in Holmby Hills, Los Angeles, California. He was 91.

During World War II, Hefner served as a writer for a military newspaper in the U.S Army from 1944 to 1946. In 1949, he earned a B.A in psychology from the University of Illinois at Urbana Champaign, with a double minor in creative writing and art. Hefner ultimately earned his degree in two and a half years. After writing promotional copy for Esquire magazine and working as a circulation promotions manager for Childrens’ Activities magazine, Hefner began planning out the elements of his own magazine, which he originally desired to call Stag Party, before deciding on Playboy.

Founded in 1953 and notable for its centerfolds of nude and semi-nude high- profile models referred to as “Playmates”, Playboy played an important role in the “sexual revolution” of the 1960s and ’70s. It also remains one of the world’s best-known brands, having grown into Playboy Enterprises, Inc., with a presence in nearly every medium. In addition to its United States version, special nation-specific versions of Playboy are also published worldwide. After a year-long removal of most nude photos in Playboy magazine, the March-April 2017 issue returned to its previous formula of nudity. With its first centerfold of Marilyn Monroe gracing shelves in December of 1953, The Playboy brand, became and still remains one of the most recognizable and abiding in history.

Besides its centerfolds, another major part of Playboy has also been the Playboy Interview. This section is usually between a notable individual and an interviewer. For example, Alex Haley, served as a Playboy interviewer on many occasions. His iconic interviews featured in the April 1966 issue included subjects such as Dr. Martin Luther king Jr., Malcolm X and founder of the American Nazi Party George Lincoln Rockwell. Another of the magazine’s most notable interviews was a discussion with then-presidential candidate Jimmy Carter in the November 1976 issue. 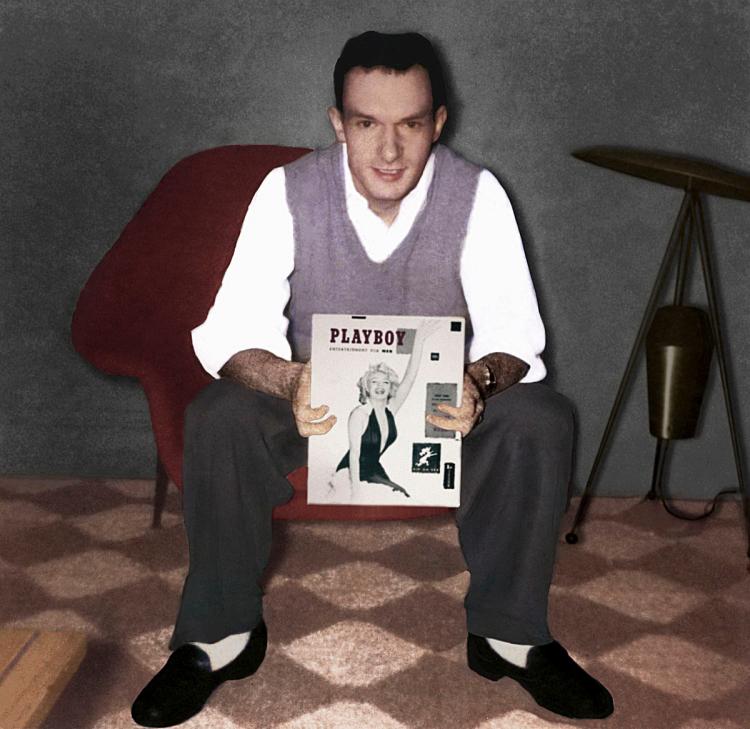 Playboy’s iconic mascot, a stylized silhouette of a rabbit wearing a tuxedo bow tie, was created by Playboy art director Art Paul for the second issue as an endnote, but was eventually adopted as the official logo and has appeared ever since. Hefner said he chose the rabbit for its humorous and sexual connotation, and because the image was like a rabbit, “frisky and playful”.

His list of philanthropy includes donating and raising money for the Democratic Party, while also supporting Barack Obama‘s 2012 reelection campaign. Both through his charitable foundation and individually, Hefner also contributed to charities outside of the sphere of politics and publishing, throwing fundraiser events for Much Love Animal Rescue; as well as, Generation Rescue. In 1979, the Hugh M. Hefner First Amendment Award was created by Christie Hefner “to honor individuals who have made significant contributions in the vital effort to protect and enhance First Amendment rights for Americans. Learn more at http://hmhfoundation.org.

Hefner is survived by his wife, Crystal, sons, Cooper, David and Marston; and his daughter, Christie, who eventually became Playboy’s president and CEO.