From “The Hood Lady” to African Royalty. Have You Heard About Graciela Blackstone?

Sometimes you end up in the right place at the right time for all the wrong reasons. That’s what happened to me last week, and I’m so glad it did. I went to a speaker training that I looked at as more of a chance to network and found myself among royalty. Let me tell you about east Baltimore native, Graciela Blackstone.

I arrived rather late, about 10 minutes after the start time so I had to find a seat on the back row. That gave me a prime view of the other late attendees as they arrived. After some time passed, I noticed a woman come in and take the last available seat on a row that had been placed behind me. The woman was regal, I had no clue who she was or how she would play into the rest of my day.

I tried to keep my eyes on the presenters before me, but the regal way she sat in her traditional Kinte cloth and wooden sandals kept drawing my attention out the corner of my right eye. To my surprise, the presenter then called out a name and I saw the woman rise and proceed to the front of the room. As she took the microphone and started to speak, I was enthralled by her story.

She started to speak, sharing a story of learning construction by her father’s side as a young girl with a knowledge of blueprints by the age of seven. Her story was so easy to relate to as she told us of her childhood in one of east Baltimore’s most worn down communities.

The woman, who I later found out was Graciela Blackstone, led us on a journey through her love for Baltimore and the disenfranchised. We learned that she was building the first Black owned amphitheater in Annapolis, Maryland’s capitol and that her company was one of the development companies to help build Camden Yards, home of the Baltimore Orioles.

There was so much information and inspiration in her testimony but what she ended her story with is what intrigued me, and I’m sure many of the others in the room, the most.

Graciela told us that she was a Ghanaian Queen. She explained to us that she was a descendant of Alex Haley and Kunta Kinte, and then told us about her mission in Ghana. Graciela had recently been enstooled as the Development Queen of Obilieman-Opah and is now working with the government in Ghana to create new, sustainable communities. The little girl who grew up to be known as “The Hood Lady” now hold royal position and is fully authorized to do business for the country there and in the United States. Her official title is Naa Adaku Mansa I. 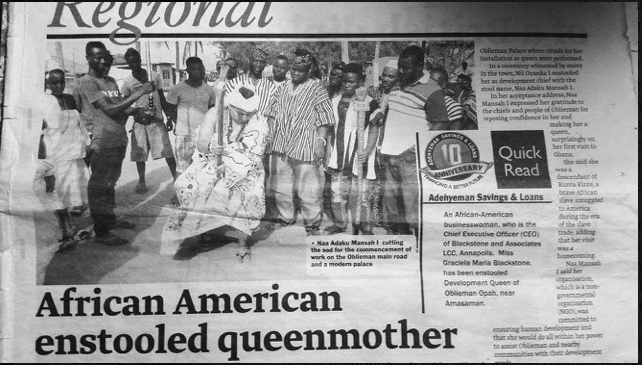 “As an African-American woman, it is an honor to be recognized at this level. Being an entrepreneur in America is a norm, but in many other countries, it is still a rarity. Especially for women,” the newly crowned queen said in an interview last year. “While there is a learning curve for me, business and outreach are much needed. I promise to capitalize on the conducive business climate in Ghana to bring investors to establish business in the country.”

After she spoke I was immediately interested in talking to her more in-depth, after all, she was just a hood lady like myself. I sent her a Facebook inbox and friend request (the nerve of me right?). When we broke for lunch, I ran out to grab sushi and sat by the door alone. I had just decided to back inside to network when I noticed Graciela talking to one of the event coordinators, she was hungry. I knew she was headed to lunch, but I had to ask if I could talk to her for a few minutes. I wasn’t going to miss my chance to shoot my shot. I’m glad I took the chance.

Ms. Blackstone was humble and down to earth, allowing me to walk with her and join her at her table while she ordered. I told her I wouldn’t take up her time, I y just wanted to know if I could set up an interview, I told her who I wrote for. She said she was happy someone wanted to share her story because not enough people were aware. I could relate, I often feel the same way.

We continued to talk as she figured out what to order that would be quick enough to allow her to snack and get back inside the event, finally settling on Old Bay Wings (how Baltimore Hon). Graciela talked as she ordered her food, I listened, pulling out pen and paper and writing as she talked. I knew this was a conversation I wanted to document.

Ms. Blackstone shared not only wisdom and knowledge of African culture and heritage with me, but her wishes for American born Black people who want to do business within the African nations.

On the subject of her enstoolment, Ms. Blackstone educated me on the tradition of carving one’s family history into the stool that rests at her feet. Being as though she is of the lineage of Kunta Kinte, her tribe is Gambian, her feet are not allowed to touch the ground when there. I took notice of her sandals, they were made of this intricate wood and held a giant bulb of a jewel, which she again explained to me, was customary. 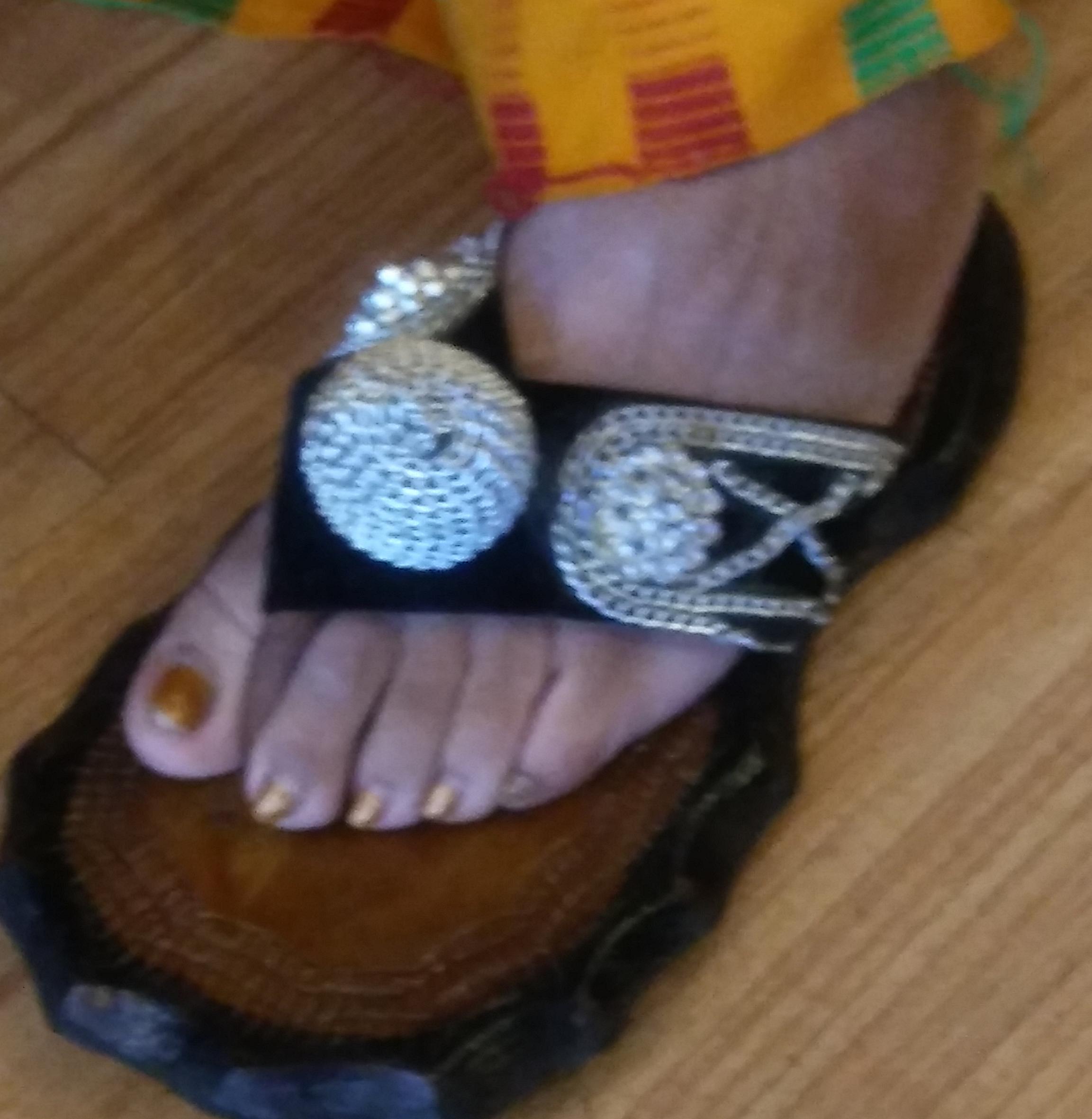 She went into detail about the two weeks of ritualistic ceremonies and tests she had to endure before she was crowned, which included her being bathed in blood, eating traditional African foods and even being locked in a cage with an alligator. She proudly informed me that her reign reached across 270 regions. Surprisingly, Queen is is political position in their culture and not marital as we’ve been trained to expect. You learn something new every day.

Ms. Blackstone says that “Africa is on the rise and will be a major world leader in less than twenty years.” Africa has not been a world leader since Egyptian rule.

We discussed the immense campaign and tactics used to keep Black Americans from visiting our native home and embracing its culture. Telling me something I wasn’t previously aware of, she pointed out that you could fit five Americas into the continent of Africa. Literally, Africa is so large that you could fit America in it five times. I was amazed. 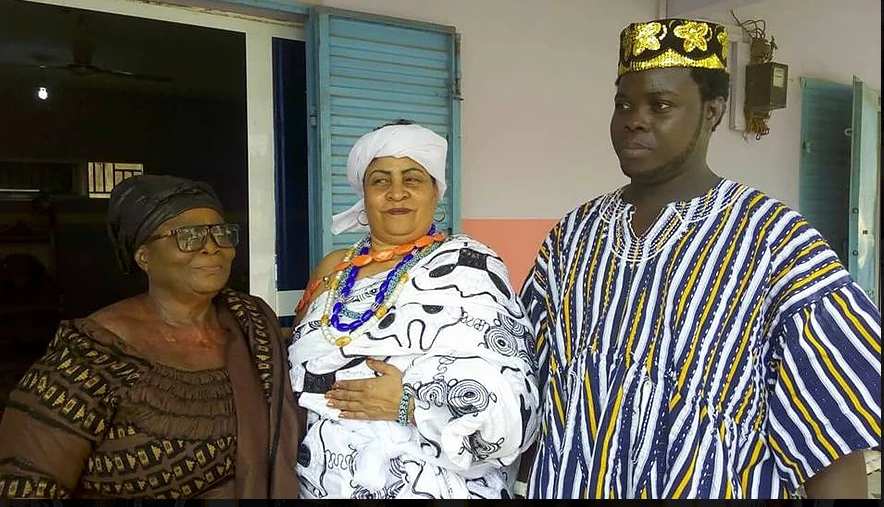 On doing business in Ghana and other African countries

As the Business Development queen of Ghana, Ms. Blackstone is the liaison to American businesses seeking to do business in the area. I understood immediately why it was important and she called me “a smart girl”. We discussed the problem with many Black Americans who travel to Africa to do business. May don’t realize how Americanized they are and how much of their American ways are a slap in the face of the heritage, culture and traditions of the Motherland.

We [American born Blacks] approach our cultural brothers and sisters and the land, with the same disrespect as the oppressors who have mistreated and robbed continent. She advises that if you seek to do business in the homeland, “you must be open-minded to receive your culture and traditions through stillness and calmness.”

It is an honor to be taught [the traditions and culture] but it is an insult to question what is taught and show your American ways. There will be a language barrier at times, there will be foods that are not easily recognizable, you’re expected to be eager and open to the customs presented to you.

As we continued to talk, I wondered if I was someone that would be looked upon as appropriating the culture, with my locs and hair wrapped in cloth, I could easily be considered one without respect. That moment was eye opening. She talked about people who wear African pattered clothes made out of polyester and twist their hair.

I could have talked to her forever, I hated to leave her to her lunch but before I asked the possibility of having her speak for one of my events one day. When you have your shot, shoot it. She didn’t say no. 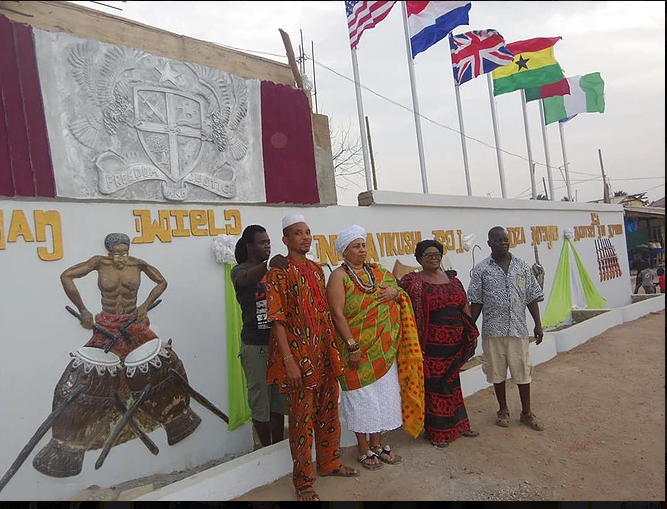 Now African royalty, and still 100% real, the former “hood girl” is seeing one of her visions come to life as her company, Blackstone & Associates, LLC, is set to break ground next year on The Blackstone Amphitheater and Conference Center for Humanity in Annapolis. This holographic technology venue will include a 4000-seat amphitheater, administration building and conference center. This amazing theater and conference center will be built in and on the grounds of the renovated Hall Brown House, which is on the historical farm owned by Blackstone’s family since 1659.

Entertainment opportunities will be in abundance, and the space will also be available for events. There are many ways to support this project as it’s in progress. If interested, visit https://www.blackstoneafh.org/get-involved