Each year, millions of football fans around the world anticipate the Super Bowl, not only for seeing their…

Each year, millions of football fans around the world anticipate the Super Bowl, not only for seeing their favorite teams go head to head, but also to see its spectacular halftime show. Many iconic artists have headlined this coveted show. Who did so this year? None other than Justin Timberlake. Equipped with his energetic choreography, the Memphis Tennessee born and bred Timberlake kicked off his performance with a snippet of his new song “Filthy,” from his new album Man of the Woods.

As the crowd exploded into uncontrollable excitement, the former N’SYNC heartthrob continued with his 2002 hits “Rock Your Body”, and “Senorita”, which quickly morphed into his 2006 smashes, “Sexy Back”, and “My Love.” As the crowd continuously jumped around, and sang along in glee, Timberlake slowed things down with an impromptu performance of his mega 2002 hit “Cry Me a River,” which was quickly followed by his 2013 hit “Suit and Tie.” This performance featured an elaborate marching band. Soon after, Timberlake slowed things down one more time while seated at a piano with a heartfelt tribute to Prince. With pristine images of the late icon as his backdrop, Timberlake belted out his own hit, “End of Time” mixed with Prince’s hit “I Would Die 4 U”.

The tribute ended with a breathtaking image of the city of Minneapolis, which is Prince’s hometown, lit up in purple lights. For the grand finale of his performance, Timberlake shifted into his hit “Mirrors,” which was quickly followed by “Can’t Stop the Feeling.” Super Bowl LII  marks Timberlake’s third time as a halftime show performer. 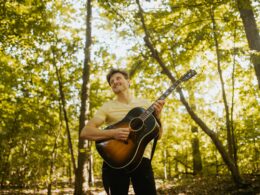 Since graduating from Yale University and achieving his Master of Music in guitar performance, Canadian singer-songwriter Alan Kulka…
byDomingorich

Jay Z and Eminem To Share Stage In New York,Detroit

MC Hammer’s Comeback: May have Jay-Z in his sights!!