Janet Jackson’s Happier Than Ever in New Music Video ‘Made for Now’, Featuring Daddy Yankee

The rumors were true: As Janet Jackson was spotted filming a music video July 23 and 24, alongside Daddy Yankee, fans went nuts on Twitter and other online platforms. Back in May she already confirmed to Billboard that she was working on new material. It was official – she was back in the studio but shared as good as nothing about the process. Then, on August 12, Janet posted a countdown on Instagram and shared the official single artwork for ‘Made for Now’, featuring Daddy Yankee. The official track and music video premiered on August 17. The video is as colorful, dancy, and multicultural as ever. Janet appears lively and youthful as ever, something fans haven’t seen from her for years. Happiness pours out as she conveys that we are ‘made for now, not tomorrow’. 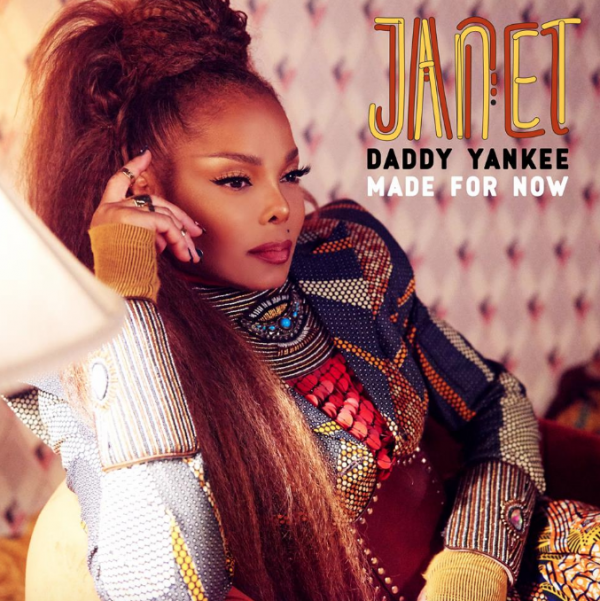 ‘Made For Now’ Cover Art

The song is produced by Harmony Samuels, known for ‘The Way’ by Ariana Grande, and ‘Say Yes’ by Michelle Williams, Beyoncé, and Kelly Rowland. Samuels also worked with artists like Jennifer Lopez, Fantasia, Chris Brown, Brandy, Ne-Yo, and more. On an exclusive interview on Billboard, he describes the process of working with Janet Jackson.

He recalls: “…she was so amazing, talking to us about what she really wanted to talk about on this record. She said she wanted it to be about love and the world coming together. She wanted it to be about unity. She felt like, where in the world was that? She was a place where she felt like she could help bring it together culturally, spiritually, mentally, by love. I was like, wow, no pressure!”

‘Made For Now’, a Reggaeton-flavored party track, differs greatly from Janet’s last downbeat R&B album ‘Unbreakable’, known for mellow single ‘No Sleeep’, released in 2015. According to Samuels, Janet wanted something energetic this time, and wanted people to ‘get up and dance’. Harmony continues explaining the idea for the song: “I quickly did research on her and she’s never done an Afrocentric cultural record before. I said, perfect. That’s exactly what I’m going to do: cultural, Afrocentric, with a little bit of Latino [inspiration] and we’re gonna write a great record to it. I’m in the shower and the first guitar line you hear in the song, I literally hear it in my head. I jump out the shower and scream, yes yes! I sing into my phone, I get in my clothes and run to the studio, speeding down the freeway like, this is going to be the record. I’m making the track and going crazy. We end up making the song, the team of us: Al Sherrod [Lambert], Shawn Butler, Verren Wade, Edgar “JV” Etienne and myself. We’re all just working together like, this is actually going to be perfect for Janet.” He added that Janet loved the song, and made changes to make it her own. Jackson’s longtime collaborator’s Jimmy Jam and Terry Lewis eventually cut the record.

The music video was directed by Grammy-winning director Dave Meyers, known for ‘HUMBLE.’ by Kendrick Lamar, ‘Firework’ by Katy Perry, and plenty other hit music videos. He is also a frequent collaborator to Missy Elliott and P!nk, and worked numerous times with Janet Jackson before (‘All For You’). This is her first video since 2016s ‘Dammn Baby’, which was also directed by Meyers.

Filmed in Brooklyn, New York City, the viewer follows a fast-forward camera throughout urban streets, undergrounds, from graffiti walls to skyscrapers. Janet is joined by Daddy Yankee, in colorful, sometimes ethnic, styles and costumes. Just like the many multinational dancers who are also present in the video, in African and tropical clothes and rad dance moves. Janet looks as happy as ever and shows that a 52-year-old can still kill it like never before. Even with a long résumé of hit videos, one thing is clear: The era of Janet Jackson is far from gone. Her new single is without doubt a proof that the icon can relive and evolve herself for every generation, and that there is still more to come.

‘Made For Now’ is the first single from an upcoming EP. Harmony Samuels confirmed being a producer for other tracks as well. According to him, Jackson’s new sound will have vibes from ‘The Velvet Rope’ and ‘Control’.

You can check out the video here:

Janet Jackson’s Rare Response To The 2004 Super Bowl Incident: ‘I Am Part Of That Conversation’

Janet Jackson Has Something Unique Planned For The 35th Anniversary Of Her Classic Album, “Control”