Hosted by Queen Latifah, BET’s Black Girls Rock 2018 was nothing short of exhilarating. After fans were disappointed…

Hosted by Queen Latifah, BET’s Black Girls Rock 2018 was nothing short of exhilarating. After fans were disappointed by MTV’s version, BET sought redemption and achieved it with their rousing tribute to the late, great Queen of Soul, Aretha Franklin. Kicking off the celebration was none other than the ever fiery Fantasia, with her energetic renditions of the Queen’s signature hits “Chain of Fools” and “Respect”. She was quickly followed by the silky voiced Jazmine Sullivan who delivered a soulful version of “I’ve Never Loved a Man”. Soon after, Ledesi, clad in a seductive strapless gown , arrived to add some sassiness to “Aint No Way”.

Vocal powerhouse Cynthia Erivo had the crowd joyfully singing along with“Say a Little Prayer, while R&B legend Stephanie Mills, flexed her pristine pipes on “Until You Come Back To Me” and “Bridge Over Troubled Water”. Afterwards, Gospel goddess Yolanda Adams, backed by a gospel choir, had everyone’s spirits lifted with her inspirational performance of “How I Got Over”. To close the show, the ladies, along with this year’s honorees which included the legendary Janice Jamison, rising star Lena Waite, and the iconic Janet Jackson, all performed an impromptu version of the Queen’s massive hit, “You Make Me Feel Like a Natural Woman”. Needless to say, the Queen would be pleased.

The War Between President Trump and Robert De Niro is on.
byClarissa Wilson 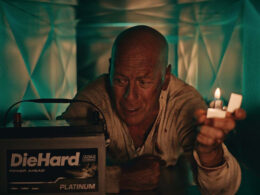 The commercial was shared by Willis’ daughter Rumer, whose hashtag, “DieHardIsBack,” may have been a touch misleading to people.
byBien Luigi

Misty Copeland just landed a reality show on Oxygen where she will mentor aspiring dancers trying to make it in the Big Apple.
byTUT Staff