Serena Williams lost the U.S. Open to rising star Naomi Osaka this past Saturday. That in itself would have been enough to make headlines, but it was Williams’ confrontation with umpire Carlos Ramos that has caused a divide in the tennis world. And globally.

Ramos accused Williams of receiving tips from her coach on the sidelines, to which she said “I don’t cheat to win, I’d rather lose.” Williams was then cited twice more, once for smashing her racket and again for engaging in a heated exchange with Ramos, which ultimately cost her the second set and the game.

As a result, the 36-year-old was fined $17,000 by the USTA. She was also made fun of for her actions in a racist cartoon by Mark Knight. 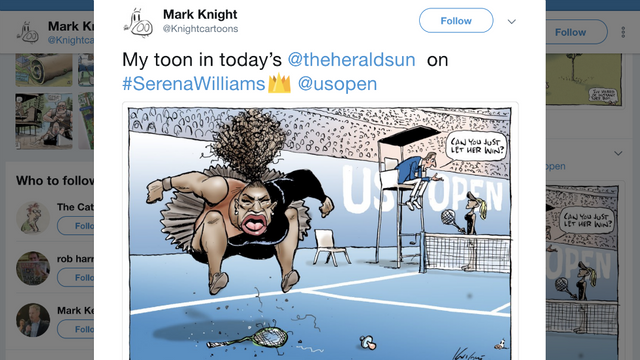 Mark Knight’s illustration depicts an overweight big lipped Williams with a baby’s pacifier not too far away. Williams is seen with bushy hair and stomping on an already broken tennis racket. Osaka, who’s a half Japanese and half Haitian woman with visibly cinnamon colored skin is depicted as a white, blonde hair frail girl. Ramos is in the background pleading with the umpire to just allow Williams to win the game to in essence, stop her tantrum.

Many have taken to social media to call out Knight’s racist and sexist cartoon. Tennis Legend Billie Jean King, who has 12 Grand Slam Titles of her own, sided with Williams and said men have always been able to express frustration on the tennis court.

“When a woman is emotional, she’s ‘hysterical’ and she’s penalized for it. When a man does the same, he’s ‘outspoken’ and there are no repercussions,” King said.

“The decisions made by Ramos had nothing to do with sexism or racism. They had everything to do with observing clear breaches of the grand slam code of conduct and then having the courage to call them without fear or favor.”