It’s almost 30 years ago when Lenny Kravitz stepped in the game. The title of his first record, ‘Let Love Rule’, released in 1989, has been his motto since. His statements of love, sex, and peace have been ongoing themes throughout his music catalog. His retro looks with flashy guitars and fashionable clothing styles – sunglasses, leather or jean jacket, and jewelry – shaped his individuality in Rock’n’Roll. Songs and music videos like ‘Are You Gonna Go My Way’, ‘Fly Away’, ‘American Woman’, ‘Again’, or ‘I’ll Be Waiting’ made him a rock icon in the 90s and 2000s, followed by famous movie roles, in ‘Precious’, ‘The Butler’, as well as playing the role of Cinna in ‘The Hunger Games’ film series. Always following an own unique style, Lenny Kravitz is known for staying true to himself, his persona, and his beliefs. This maybe is one of many reasons why Kravitz is always seen as a music idol and icon. His music, therefore, earned him many awards, including Grammy wins of ‘Best Male Rock Vocal Performance’, winning four times in a row from ‘99 to 2002. With a collection of ten studio albums, Lenny returns with his 11th long-player ‘Raise Vibration’, four years after his last studio project ‘Strut’ in 2014.

‘Raise Vibration’ starts off with opener ‘We Can Get It All Together’ in a silent slow pace at first, as Kravitz starts singing the lyrics: ‘Wrapped up in sorrow/Illusions I can’t by words explain/Caught up in nothing/Confusions has turned my world insane’, until loud drums take over, marking the start of the album. The listener officially enters the record, followed by ‘Low’ – the official second single of the album. Most notably is Michael Jackson’s sample of his ‘Hooo!’ The production of Michael’s voice extract is so solid that it actually sounds if Jackson was still alive and hopped in the studio with Lenny to give the record a little extra. ‘Drop with me let me go/Got to keep it low’ goes the hook, followed by Michael’s hooo-ing, makes ‘Low’ one of the highlights of the album.

Another highlight is track #3 – ‘Who Really Are The Monsters?’ With manipulated guitar sounds, Lenny sounds like a pilot holding a headset repeating ‘start communicating’, while on the hook he expresses that ‘the war won’t stop as long as we keep dropping bombs’. With 5:19 minutes the anti-war song truly takes its time with its message, followed by a saxophone solo, and some 80s/70s old school synths. Most of the album follows the tradition in lyrics and style. The title track emphasizes that fashion, as he claims ‘we got to raise vibration’, ending with sounds of an ethnic tribe. The tracks take their time, as the album does not mind to make space for radio-friendliness. ‘It’s Enough!’, the official first single of the album, is the best example in this case. The track is 7:54 minutes long and has a Bob Marley-esque mid-tempo rhythm, addressing world problems in the middle east, exclaiming that we all are ‘getting f***ed’ while closing with a trumpet solo. ‘Here to Love’ on the other hand uses different music instruments: A piano and, towards the end, a choir. The sorrowful song depicts ‘we must all unite for we are one creation’ in an outcry fashion, making it almost cheesy for down-to-earth listeners. While not only linking M.J. in his record, Lenny also takes tribute to country singer Johnny Cash in track #5 of the same name, whom he met in 1995, tying in 70s music traits. The second half of the record addresses love and relationships, as he expresses searching for ‘The Majesty of Love’, accompanied with sounds of bells, and finding his ‘greatest love ever known’ in ‘Gold Dust’. Similar to his 90s collection of love tracks are ‘5 More Days ‘Til Summer’ and ‘Ride’, and closes the album with stretchy R&B and soul track ‘I’ll Always Be Inside Your Soul’.

‘Raise Vibration’ is another proof that Lenny Kravitz will always create music and a style of his own wishes. A great thing, as he never follows any current trends as many other singers do. And he doesn’t have to, because he always will have credibility as an artist and style-icon. In comparison to 2014’s ‘Strut’ and 2011’s ‘Black and White America’, his new album is more calm and steady. Crazy shoutouts or melodic sing-alongs from some of his earlier recordings are sometimes missing, as the album rather focuses on world problems and love expressions in a direct matter. Lyric-wise very hippie-like. His approach, however, can be a bit drained throughout the album. On a positive note, the album’s music is as ‘real’ as ever. All kinds of instruments collide together without leaning too much on computer programs and audio workstations, which these days is harder to find from other album releases of other artists. At least Lenny will always keep it real.

We Can Get It All Together
Who Really Are The Monsters?
Low
It’s Enough!

‘Raise Vibration’ was released on September 7, 2018. On an interview with Rolling Stone, he confirmed already working on a follow-up funk record, a possible soundtrack album for an unnamed film project in the future.

For upcoming tour dates in The U.S. and Europe, visit lennykravitz.com 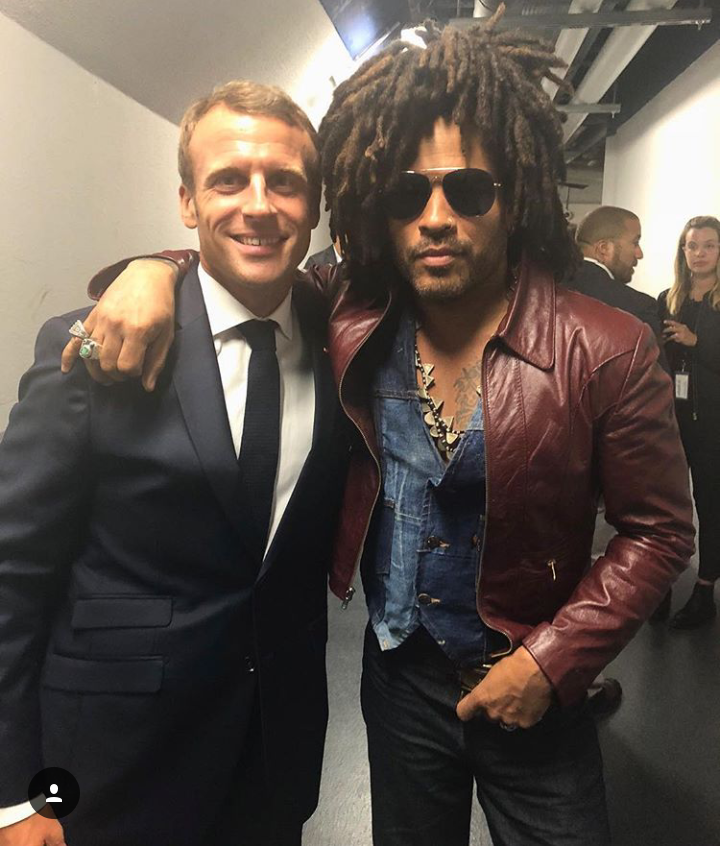 Lenny Kravitz with French president Emmanuel Macron at a U2 show in Paris, France.

The Weeknd Is Compared To Michael Jackson By Timbaland