It’s not even a year ago when Marshall Bruce Mathers III aka Eminem dropped his last studio release ‘Revival’ in December 2017. Eight months later, on August 31st, ‘Kamikaze’ came out of the blue – without any marketing or prior announcement, following the trend of unexpected album releases. Surprising fans and critics alike, ‘Kamikaze’ marks his 10th solo studio album, and made it on the top of the Billboard Charts.

Crowned as the king of hip-hop, Eminem made history as one of the best selling artists of all time, even though his rocky start with his very first release ‘Infinite’ could not get hold of a large fan-crowd in 1996. The album’s traditional hip-hop beats in 90s fashion, that could not be found in every record store but rather in the trunk of his car, sold around a thousand copies. His effort paid off eventually, as the lack of Infinite’s success created his alter ego Slim Shady, unintentionally, due to anger and disappointment. When a year later the ‘Slim Shady EP’ was released, none other than Dr. Dre got the attention of the energetic and crazy rapper from Detroit. Signing to Dre’s Aftermath changed his career drastically, as ‘99s ‘The Slim Shady LP’ catapulted his rap career, introducing himself in his comical but grotesque Single ‘My Name Is’. His violent but somehow funny behavior and colorful music videos made him stand out of the crowd, in comparison to any other rapper from that era. No one could help but smile listening to ‘The Real Slim Shady’, ‘Without Me’, ‘Superman’, or ‘Guilty Conscience’. As his rude but jokey lyrics and his direct approach of mocking other celebrities may not be everyone’s preference, the audience still chuckled listening to Eminem in his cartoonish voice – turning bad rap lines into a funny spin. It was something different. Nobody had this kind of style. As he liked to poke fun of every aspect, whether politically correct or not, offensive or not, it didn’t matter to him. Some darker songs, however, like ‘Stan’ or ‘Cleaning out my Closet’, where he shared dark pages of his life, fame, and personal relationships, made people admire his realness about life. His private life, however, eventually made him decide to take a distance from his career in the mid-2000s, releasing ‘Curtain Call: The Hits‘ in 2005, explaining the viewer in single ‘When I’m Gone’ that he is a father first before being an artist. His comeback in 2009, ‘Relapse’, was a warm welcome for his fans, as his strong fanbase welcomed him back to the scene. Since then, Eminem continued dropping music when he wants, whenever he wants. His new record ‘Kamikaze’ is the base of this. This time, it didn’t take years, but 8 months in distance between his new record and last album ‘Revival’. Is it worth it, a fast-paced release? Let’s find out. 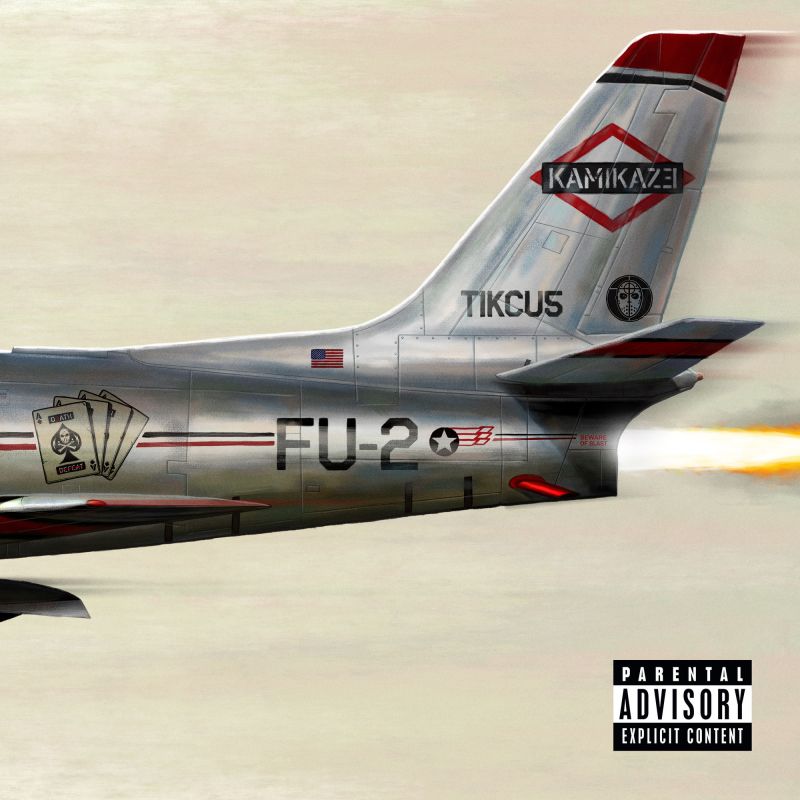 What’s definitely noticeable on Kamikaze is that Eminem goes back to a style of how he was known and how fans perceived him. The polarized response of 2017s ‘Revival’ is the catapult: Many fans and critics bashed on Revival’s commercial appeal, being filled with one too many pop artists (Beyoncé, Ed Sheeran, P!nk), the lack of focus and too many rock samples. Especially Eminem, who criticized mainstream artists heavily in his early years, actually mocking them for how they presented themselves in the media, but then gave the impression as if he was relying on them in his 2017 approach. The negative response of his ninth studio album is one of the topics in ‘Kamikaze’. Especially in the first music video he released September 4th, for his track ‘Fall’, Eminem gets bombarded by phone alerts of fans commenting negatively on ‘Revival’. Towards the ending of the video, he steps on the physical CD version of the album. While still standing behind his 2017 album, his new record goes the other direction – darker, more hip-hop, not trying to please a mainstream audience. So while Slim Shady disapproved the hate he received, he did, in fact, listen to the response.

The album starts with opener ’The Ringer’. The listener hears a crash, sounding like kamikaze, as Em continues with angry but playful rap tones. Political issues about Trump and vice president Pence are discussed, similar to his 2002 track ‘White America’ from ‘The Eminem Show’, while addressing radio personality Charlamagne Tha God, and commenting other rappers like J. Cole, Sean ‘Diddy’ Combs, and Kendrick Lamar. Amazingly, his rapping starts to get faster and faster, as Eminem’s energy glows throughout the track. In similar fashion goes ‘Greatest’ (where he imitates Kendrick’s ‘Humble’) and, one of the highlights of the album, ‘Lucky You’. In collaboration with Joyner Lucas, the rapping goes in super fast forward mode. The lyrical content criticizes rap music of today in some way or another, especially trap, while the music video displays how rappers imitate each other, or maybe Eminem.

The album’s dark tone continues with ‘Normal’, this time addressing relationships, as he may be asked one too many times why ‘he can’t be normal’ from a past love, responding back in a creative singing and rapping combination.

‘Stepping Stones’, on the other hand, describes the struggles of his band D12 after one of the members, Proof, died in 2006. As Eminem shares his frustration of how the members lost touch with each other, confirming, as it seems, D12’s end. ‘Not Alike’ continues with serious piano sounds, featuring Royce Da 5’9, and unexpectedly changes piano in heavy bass boom box sounds. A diss to Machine Gun Kelly after he pointed out Em allegedly hindered his career, and commented about his daughter Hailey. His rap underlines with the lyrics ‘we are not alike’, while Kelly responded back with ‘Rap God’, with another response by Eminem in ‘Killshot’ (not present on the album). History continues: Back in the day it was the rivalry with Ja Rule and his label Murder Inc., and a decade later not much changed. If it isn’t Ja Rule, or some of his other rivals from the early 2000s, like Moby or Mariah Carey, it’s Machine Gun Kelly in 2018. The list continues.

Energy is turned on with title track ‘Kamikaze’. ‘Nice Guy’ and ‘Good Guy’ (both featuring Jessie Reyes) go hand in hand. While Reyes’ high pitched vocal sounds on ‘Nice Guy’ turn more aggressive, the latter takes over in more lighter tones, with Reyes’ singing as well as her way of pronouncing words remind much of singer Sia.

The album ends with ‘Venom’, the official Soundtrack single for the movie of the same name, starring Tom Hardy and Michelle Williams. In ‘Venom’, playful Eminem is back. Concrete style, cool music, and energetic raps in good old Eminem fashion.

Official music video for ‘Venom’, the soundtrack single for the movie of the same name.

Kamikaze seems like a fight within himself, responding to haters and the criticism he received for ‘Revival’. Uptempo fast paced songs are loudmouthed, presented by his alter ego Slim Shady, who somehow absent-mindedly takes over like an evil twin. The album’s fast and aggressive content forms a great energetic hip-hop record. Totally a different approach than ‘Revival’, most likely on purpose, to either please fans after their disapproval but on the same time having a hard time dealing with the criticism, making a bigger issue than it actually was. ‘Kamikaze’, however, is especially remarkable for the great rap styles: Playful, fast forward, sometimes mixed with some singing in between, fun to listen. On the other side, continuous rivalries and disses start to become tiring. Even though it’s one of Eminem’s signature moves, his years and decades of pointing out others are starting to become repetitive, like beating a dead horse. Musicwise Kamikaze’s energy is as high as ever. Reincarnating Eminem from his high peak days, silencing ‘Revival’ haters as they might finally get the album they were hoping for.