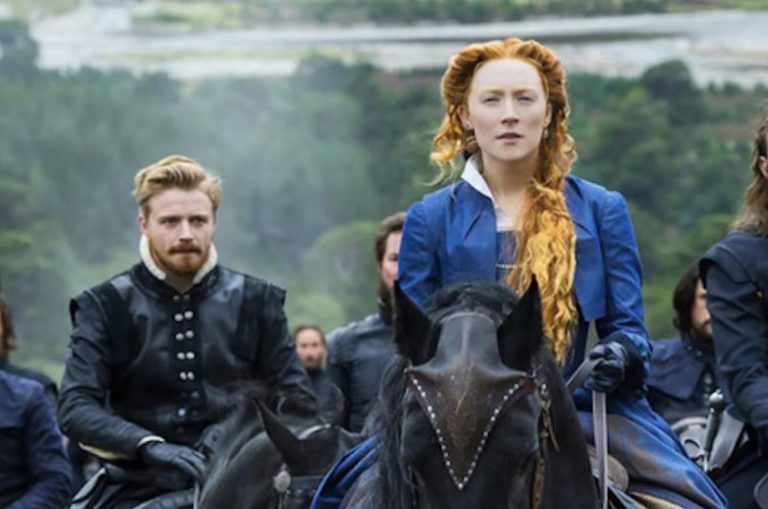 Based on the book Queen of Scots: The True Life of Mary Stuart by John Guy, Mary Stuart marries the King of France at 16 years old but soon finds herself a widow at 18.  She defies the pressure to remarry, and instead returns to her native Scotland to reclaim her rightful throne, hence the title, “Mary Queen of Scots,” but Scotland and England fall under the rule of the compelling Elizabeth I.

Each young Queen beholds her sister in fear and fascination. Rivals in power and in love, and female regents in a masculine world, the two must decide how to play the game of marriage versus independence.

I love historical dramas because of the acting, costumes, and passion, but this film was just okay. Saoirse Ronan’ (Mary Queen of Scots) acting is exceptional and Margot Robbie’s (Elizabeth) acting is powerful, but the film just didn’t take me there.

I feel like ever since the success of Showtime’s The Tudors, people have been trying to cash in on King Henry VIII’s ancestry. While Mary Queen of Scots did a great job informing me of the jealously Elizabeth had for her cousin Mary, in my mind I kept comparing Margot Robbie’s version of Elizabeth portrayal to Cate Blanchett’s in the 1998 version of Elizabeth and it wasn’t that the acting was bad, I just don’t think the role was a good fit for her.

Then the movie also added races and cultures that I am sure weren’t in the real-life historical telling of the story, which then turned the movie into a reboot of a classic.

So, if you know nothing about the Tudors dynasty then skip this movie unless you plan on reading the books or who knows maybe the movie will inspire you to read up on the history because I left the movie theater knowing that the ending will inspire a prequel titled, “James VI and I” as he is the son of Mary Queen of Scots aka the union of the Scottish and English crowns on 24 March 1603 until his death in 1625.