All in the family values on and off set with Dallas Dupree Young.

Dallas Dupree Young stars as Stuart, a boy who moves to Portland to live with his uncle and cousins. After the move, he finds himself embarking on a variety of adventures with his cousin, Ivy. Cousins For Life airs on Nickelodeon beginning January 5th at 8:30 PM ET/PT.

What made you want to get into acting?

Actually, acting just fell into my lap. I always thought I would become a baseball player like my dad and m brother, but my parents received a phone call inviting me to attend an acting showcase in Los
Angeles. I had a great time and from that experience, I met my manager. She introduced me to my agent and I began to book jobs right away. I discovered a whole new world and acting became my passion.

How did you land your first role?

My first role was in a series called Murder Among Friends. I was so nervous about being new to the business, especially since the audition scene required me to react to finding someone who had just died. But, my manager coached me and filmed me on her front lawn along with her dog Marley, which was part of the scene. It made me so comfortable that I was able to bring real feelings to the scene. And, the next day, I received a phone call letting me know that I had booked the job! I was so excited, you could have heard my screams from miles away! So that role was the beginning of my journey.

Being on Cousins For Life has been the best experience of my life. The show gives me a chance to work with amazing creators, Kevin Kopelow and Heath Seifert, and really cool castmates. Being on the show also allows me to be a positive role model to younger viewers, and hopefully, they can learn from my example that anything is possible with hard work. While working on the show, the whole production became one big family. I really enjoyed working in such a fun and professional environment with so many wonderful people.

What did you do to celebrate the wrap of season 1?

To celebrate, the cast and crew went to a popular bowling alley in Hollywood. In addition to bowling,
there was a lot of good food as well as other fun games for us to play all night long. The best part came at the end when we got to see a blooper reel from season 1. Believe me, there were many bloopers and we all had a good laugh!

Tell me about your character Stuart and how you made him your own from the script and in front of
the camera?

My character Stuart is an entrepreneur who is very creative, impulsive and at times finds himself in
sticky situations. I made the character my own, by learning the script and preparing each day. After
learning the script, I was able to put my personality as well my expressions into it. Because I could
personally relate to Stuart, it allowed me to put more energy into the role.

Hailing from Houston, Young found his passion for acting when he was just nine years old. Since then, Dallas has booked recurring guest star roles in Shameless (Showtime), The Good Place (NBC), The Mayor (ABC) and The Fosters (Freeform). He is also the son of Atlanta Braves first base coach and former LA Dodger Eric Young, as well as brother to former Anaheim Angels outfielder, Eric Young, Jr.

Take a bite out of Eric Johnson and how he 'caters' to the Black and Gold City.
byChristina Jeter

It looks like Fish Mooney's time may literally be up on "Gotham". Could she soon be sleeping with the fishes?
byBrennen Jones 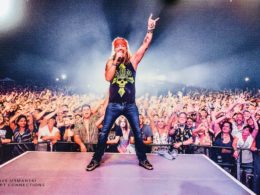