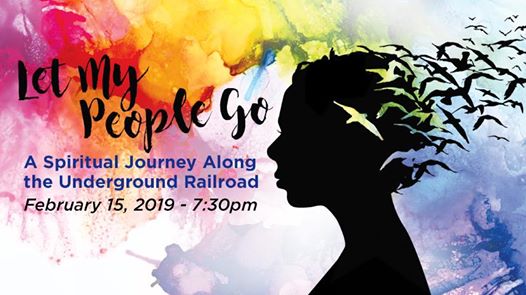 In February 2019, the Mendelssohn Choir of Pittsburgh (MCP) invites audiences to celebrate Black History Month with the Pittsburgh premiere of American composer Donald McCullough’s “Let My People Go! A Spiritual Journey Along the Underground Railroad.” This concert of African American spirituals is presented in collaboration with Ebenezer Baptist Church, where the concert will take place on Friday, Feb. 15, 2019, at 7:30 p.m.

At 110 years in operation, MCP is the city’s oldest continually performing arts organization. Composed of 100-plus singers, it is led by Robert Page Music Director Matthew Mehaffey. “We’re excited to collaborate with Ebenezer Baptist Church on this powerful piece,” says Mehaffey. “This is a celebration of community both past and present.”

What is the story behind Robert Page

was the director of MCP for 28 years. He was a conductor who passed away in 2016, and the board honored him by naming the Music Directorship after him

How did you become involved with the Mendelssohn?

I was named Music Director in 2016 after the organization did a national search. I am native to but live in MN. I commute weekly to work with this great group

What do you love most about being a music director?

The people, the tradition of excellence, the willingness of the organization to take risks and be a leader in the classical music world

How do you decide what pieces the choir performs?

The concerts we do with the PSO are chosen by the symphony. For our self-produced concerts I do a lot of thinking and brainstorming by myself and with others. Some concerts just come very easily and others require a lot of consideration to find the right mix of music.

How was the venue chosen?

Given the music of Let My People We wanted to partner with an organization that was connected to the African American Community. We looked at many different churches, and Ebenezer seemed to be the right one. We approached them about the idea and they have been the most amazing partner in every way.

What can the audience expect?

Incredible hospitality by the Ebenezer community. To be moved by the power of the voices. 120 members of the choir. 4 soloists who have sung in major opera houses of the world. 2 of Pittsburghs best local actors. To learn more about the African American Spiritual tradition. To be inspired by the message of hope that permeates the musical work.

Will this show stream live for that can’t attend in person?

WQED 89.3 will broadcast the show live

Will any of Dr. King’s Family members be attending or have a part in the production?

Not as far as we know; Mayor Peduto will attend and give opening remarks.

Meet Demareus Cooper, the mezzo soprano lead who is from Pittsburgh!

What made you want to be part of ‘Mendelssohn Choir of Pittsburgh’s ‘Let My People Go!”?

The opportunity to perform with this organization singing both traditional and Choral arrangements of spirituaĺs, also in a setting, again, with this fabulous organization, was an absolute win-win for me.

What is something about MCP that you can’t get anywhere else?

I think the long-standïng history of this organization, the high expectation one has of them as artists and musicians, put them on a level very few ensembles have achieved. I’m also excited to work with Maestro Mehaffey, he has a great deal of positive energy that he’s bringing to the game.

Do you have a favorite historical building story about Pittsburgh?

The stories that ring uppermost in my spirit right now are the ones that harken back to Pittsburgh’s connection to the early years, the start, of The National Negro Opera Company. Madame Mary Cardwell Dawson, O’Labrice Casson Beckom, Catherine Gardner, Peggy Pierce Freeman, Rudolph Fellner, Merle Sharf are aĺl just a few of the amazing individuals who supported people of color in our pursuit of classical music.

Critically acclaimed as one of the finest choruses in the country, MCP has featured thousands of community members in performance, along with a hundred-plus-year roster of who’s who in popular and classical music. The choir provides talented youth with a rigorous, fast-paced musical environment in which to develop their vocal and ensemble singing skills.

Ebenezer Baptist Church in Pittsburgh’s Hill District has been a cornerstone of Pittsburgh’s black community since shortly after the Civil War.

The 143-year-old church, designated a Historic Landmark in 1979, was the first black Baptist congregation in Western Pennsylvania to own a church building. Ebenezer dates to 1875 when the congregation was formed. The congregation bought a church from the Presbyterians in and moved in 1930 to the current site at 2001 Wylie Ave. Ebenezer’s role in the civil rights movement was highlighted by its hosting of the National Urban League’s Annual conference in 1932. Later, Dr. Martin Luther King Jr. made his first visit.  The Church was the site of other firsts as well.

In 1923, Ebenezer began using a bus, called the Gospel Wagon, to drive church members with physical limitations to services. According to church records, the Gospel Wagon was the first of its kind in the nation. On March 13, 2004, destroyed Ebenezer Missionary Baptist Church leaving two Pittsburgh firefighters dead.

A new church was built on the same site in 2006. The current Pastor is the Rev. Dr. Vincent K. Campbell, Senior Pastor since 2013.