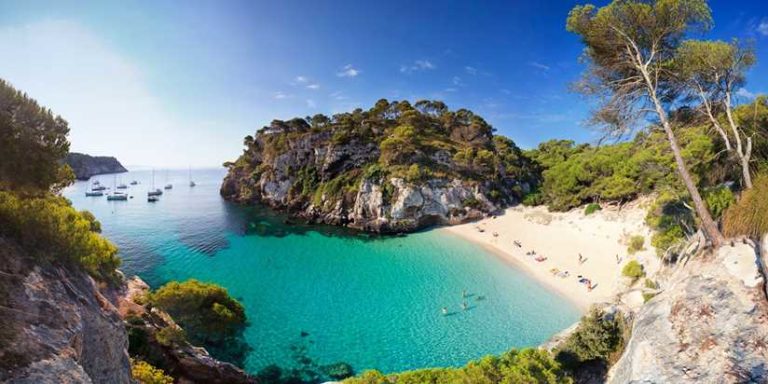 Why Menorca Is a Piece of Paradise

Menorca’s popularity has been growing in recent years, and there is a vast amount of reasons why. This Balearic island in the Mediterranean offers a more untouched and natural oasis compared to the overcrowded and popular tourist resorts which are its Spanish neighbors.

Immerse yourself in the highlights below and open your mind to all Menorca has to offer.

Menorca houses some of the world’s most glorious beaches, equipped with soft white sand and turquoise oceans. It may be perceived that this would only serve to entice crowds and holidaymakers, but these beaches remain tranquil and peaceful even in high season – with more possibility of finding the perfect spot due to Menorca having more coastline than Ibiza and Mallorca combined.

Menorca doesn’t offer only beaches; it houses over 200 natural coves waiting to be explored.

Its Escape from Heavy Tourism

Even with the most beautiful places comes the possibility that a high volume of holidaymakers can dampen your experience. Tourism is, of course, a beneficial and positive concept, yet this doesn’t mean that you want your holiday to be remembered for the mass of people whose sole purpose was to ensure you couldn’t find a spot on the beach or be able to partake in any activity without a busy crowd.

Menorca actually has very little in terms of tourism development and remains a place of sheer natural beauty. This is mostly helped by UNESCO officially declaring it as a Biosphere Reserve, namely, a protected area of biodiversity.

If this doesn’t sound enough peace and tranquillity for you, when choosing Menorca as a destination, consider choosing an accommodation which allows you, even more, privacy and peace, such as villas in Menorca instead of hotels or more public lodging.

You would expect Menorca to offer a range of seafood delights due to its access to the Mediterranean waters, meaning all sourced seafood is natural and of the highest quality. Menorca even has its most celebrated and coveted dish, which stands as its local lobster stew.

If seafood isn’t your first choice, don’t be disheartened, as traveling more inland means you can try a host of delicious cheeses available in the island’s cheese factories, or experiment with local cuisine by socializing with the Islanders and tasting the delicious delicacies they may have on offer.

Although Menorca is host to some of the most glorious beaches in the world, this doesn’t mean you are constricted to remaining on the coast. This island has numerous reserves and parks all the way across it, and due to its protection as a biosphere reserve, as previously mentioned, this means an array of wildlife can be found in abundance here, amidst the untouched natural landscape as far as the eye can see.

It is also home to quaint traditional towns and villages, which are easily accessible and wonderful to explore, with the likes of traditional cobbled stone and wildflowers lining the streets. Panoramic views are available from the best spots on the island, and you can even hire a car to better explore everything Menorca has to offer.

If your preferred method of travel is hiking on foot rather than hiring a car, Menorca can grant that, too, as it’s possible to hike around the entire island. To do this on foot would take around a week at least, so plan your route carefully and make regular stops. With proper planning, however, there is no reason why you couldn’t make your holiday a week-long hike around the best the island has to offer.

With the option of hiking, you are presented with a bridleway which spans the entire island, and even have the choice to break up your path by riding on horseback or travelling via bicycle, as well as on foot. This official bridleway is named Cami de Cavalls and surely isn’t an experience to be missed.

The glories of Menorca are best explored when the weather is at its peak, and this island comes with sunshine all year round. Naturally, hot weather is never 100% guaranteed, but Menorca is the closest you might find, as its summers come with top temperatures, and the cooler months (October to May) remain bright with sunshine. A slight breeze can help take the edge of the highest temperatures, but Menorca boasts an in-demand coastal climate.

Furthermore, its east positioning means Menorca is facing the best sunrises with uninterrupted views across the Mediterranean Sea. Simply divine.

If you’re considering Menorca as a dream destination, it’s likely that you want the evening scene to be more low-key than its party neighbours such as Ibiza, and this is exactly what you’ll be getting with this island. Low-key doesn’t mean non-existent, though, as Menorca offers live music, dancing opportunities more along the traditional lines of salsa rather than the club scene, and it even has a famous bar set into a cliffside, offering a front-row seat to glorious sunsets from its terrace which enjoying your drink.

Incidentally, Menorca provides high-quality alcoholic beverages due to its abundance of vineyards, and you are even able to book a full tour around many of the best wine estates. There are even festivals designed and celebrated around the best of the local wine – so be sure to grab your own bottle!

If wine isn’t your thing, you can rest easy knowing there is also a gin distillery in Menorca, and feel welcome to try the local recipe, which is a delicious mix of gin and cloudy lemonade.

Menorca offers a series of natural stone structures spread across the island. These megalithic structures offer nostalgia to an era more than a thousand years back. Incorporate these amazing constructions into your hiking journey across the island, and see a host of stone circles, gigantic slabs of rock and shaped stone buildings. You will even have the opportunity to explore a little deeper, as some of these buildings have remains of underground houses and storage facilities.

Who Came First: The Chicken Or The Egg?