Colin Kaepernick hasn’t been in the NFL since the 2016 season. There is a reason why he isn’t and it is not what you think.

Colin Kaepernick has been out of the NFL since the 2016 season which he finished with a starter-record of 1-11. However, there are common misconceptions about why Colin remains out of the league; everything from Colin quitting, his ability to play or even start, and the controversy surrounding his kneeling and protesting.

The first misconception about why Colin Kaepernick is no longer in the NFL and did not receive a contract after the 2016 season is that he simply is not good enough. Both sides of this argument have been screamed over dinner tables for several days each time Colin makes the news, which has been consistent recently. However, the insinuation that Colin was a sub-par, or even average quarterback in his last year in the league is just outright false.

Below we explore the red zone efficiency of all quarterbacks during the 2016 season. An odd place and seemingly cherry-picking-esque place to start, I know. But there’s a method to the madness. During the 2016 season, Colin had the 2nd highest red zone QB rating in the whole league. The long-strided quarterback did not throw an interception all year (12 games started) where it mattered most, in the red zone. This was above names like Tom Brady, Aaron Rodgers, and Andrew Luck, to name a few.

Let us now take a look at the lowest 10 red zone quarterback ratings during the 2016 season.

This list consists of all-time memorable quarterbacks such as Ben Roethlisberger, Cam Newton, and Philip Rivers.

If we view the overall quarterback ratings for all pass plays throughout the 2016 season, we see Colin at 17th place. Not great, not terrible. Average. His rating of 90.7 did best Pro Bowl quarterbacks Cam Newton, Eli Manning, Phillip Rivers, Joe Flacco, Carson Wentz, Jameis Winsotn, Carson Palmer, and Ryan Fitzpatrick. Philip Rivers even had a slightly lower rating in the 2016 season, a season that saw him make the Pro Bowl.

Of course, QB rating is not the most exact science, so let’s focus on other metrics. In regards to interceptions, Kaep had the 6th lowest interception percentage in the league his final year while also boasting the 13th best TD percentage. Kaepernick, however, was not known for just his trowing capability, but also his legs. Kaepernick for the third most attempts in 2016 for a QB, behind Newton and Tyrod Taylor. With this, he obtained the most yards per game, averaging 39 yards compared to a league average of 14.4 for QB’s. He also had the most yards per attempt (6.8), had the 2nd most yards total (468), second only to Taylor’s 580.

Let’s talk about fumbles. With more carries comes more opportunities to put the pigskin on the turf. Kaepernick definitely coughed the ball up more than average; a total of 9 times (Average among starting QB’s was 6.48 fumbles). However, this was not the most in the league or even unheard of for high-caliber quarterbacks. Carson Wentz had 14, Sam Bradford 10, Prescott and Cousins both had 9 and were elected to the Pro Bowl that year. Others that had 9 are Tannehill, Fitzpatrick, Mariota, and Andy Dalton.

Colin was sacked the 2nd most throughout the season, however. Second only to Jared Goff. It is no secret that Colin had a terrible offensive line this season. Besides mainstay Joe Staley covering his blind-side, the team did not have a great protection scheme. According to Pro Football Focus, the 49ers ranked as the 28th best offensive line for the 2016 season.

Defense wins Championships. When the 49ers were yards away from clinching the Lombardi Trophy just years prior, they had a top defense. In 2016, they were far from it.

Below, we can explore the 49ers’ attack against runningbacks in the 2016 season; by far the worst in the league.

The case against Colin Kaepernick for his capability is a factually incorrect one. Kaepernick could play. One other argument that is made is that he declined an offer, one from the Broncos. Although this is technically correct, it stands to have some explaining.

The Broncos were interested in trading for Colin Kaepernick during the 2016 season after the quarterback’s contract was restructured during the season to contain a team option. According to reports at the time, the Broncos were offering $7M in base salary when Colin was already set to make $11.9M from the 49ers that year. The 49ers refused to pay up the difference and Kaep did not want to pay up the $4.9M out of his pocket so the deal fell through. Regardless, for a quarterback who is already playing well enough to enjoy a starting quarterback position as well as the money that comes along with it to take that large of a pay-cut is ridiculous and does not make business sense.

With Kyle Shanahan coming in after the end of the season from the Falcons, Kyle did not see a scheme fit for Colin Kaepernick so the team informed him that they would release him so he opted out of his contract to find a new home. This is not the same as quitting, just so we get that straight.

So what does this all mean? Was Colin black-balled by the NFL? I don’t know. What I do know is that Colin had the statistics and played well enough to have a great shot at a longer career. Since he left the NFL, he has made good on his mission to make the world a better place. Even though he made a fiasco out of his recent tryout, he still deserves a spot in the NFL over many of the poor excuses for professionals we have seen over the last couple of years.

Is a Data Science Degree Really Worth it?

Serena Williams is as dominate as ever, as she has now won a career high 31 matches in a row.
byBrian Sprowl 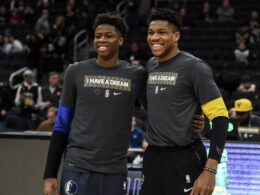 The Lakers Enlist Giannis Antetokounmpo To Give Kostas His Championship Ring

Giannis and his brother Thanasis shouted out the champ after their mom, Veronica, congratulated Kostas for his ring.
byBien Luigi