Spring is here at last and with it comes a whole load of new cannabis strains.

Spring is here at last and with it comes a whole load of new cannabis strains. On a recent visit to a couple of our favorite weed stores to have a look at what’s available for the coming warmer months.

We were presented with some strains of weed that have not been around all winter; Gold Leaf being one in particular. There seem to be many variations of this strain and the research on these will likely be one an article of the future.

A few of the new cannabis strains that we came across, really motivated us to take a closer look at their genetics. Purple Pie, Strawberry Shortcake and Cookie Puss strain definitely deserved some more investigation. So here’s what we uncovered about them.

Purple Pie strain comes out of the Freddy’s Fuego cannabis production operation. They have produced some new weed recently that is getting a lot of attention and sparking some real interest. One of the secrets to their success is their branding.

Their cannabis products are packaged so cleanly; exuding and a quality that clearly justifies the $50 price tag for 1/8th of an ounce. May e we will wait for the end-of-year sale for that one! Looks apart, the question is; is the price justified in practice? Before we get into this, it is worth clarifying that budget is no one of the largest qualifying factors in my choice of weed. No, I am not a rockstar, but I do appreciate that one has often to pay for a quality product.

For instance, consider some of the more expensive strains from Exotikz; you could easily pay $54 for a 1/8th of an ounce on them. It may not sound like you are getting much for your money; not until you compare it directly to a weed that’s retailing at $35 for the same quantity. You are into budget weed territory here and, I’ve found, for budget money you get budget weed.

Every aspect of a budget weed is less satisfying than a quality smoke. Maybe to the uninitiated, there may not be a lot of differences. But, my friends, just wait until you have tasted the delights of a quality weed. From how it grinds to how the smoke comes out is different, and these aspects are much less quality with a budget weed. Also, a higher price on their product gives a cannabis company the opportunity for some corporate responsibility; not much of that at the lower end of the market!

Cookie Puss sounds like a cute name on first impressions. However, the briefest of delves into its heritage shows you that it is a hybrid between Girl Scout Cookies and, wait for it…Cat Piss. Yep, the cannabis industry is really going overboard to get itself accepted by the powers-that-be. Names aside though, Cookie Puss is a great strain of cannabis and it is worth taking a closer look at the parents of this oddly-named offspring.

Looking even further back into the Cookie Puss strain family tree, Cat Piss was descended from a Super Silver Haze phenotype, which in turn was a cross between Haze, Skunk and Northern Lights. Haze strains are particularly popular due to the cerebral euphoria they generate. Northern Lights has the qualities of a pure indica, while Skunk is a standard hybrid. The producers of Super Silver Haze were clearly trying to make the perfect hybrid when they set about concocting this one.

Anyway, to get back on track, there have been several paternity claims for Cat Piss over the years. It may also be the love-child of Granddaddy Purple and Northern Lights. Some people actually believe that there is more than one type of Cat Piss – I’m not too sure as to the correct pluralization though (Cats Piss or Cat Pisses?).

Examples of different types can be found within California; the Northern strain is an Afghani landrace while its Southern cousin stems from the Trainwreck strain. Regardless, the fun head high remains the same.

The Strawberry Shortcake cannabis strain appears to have received a whole lotta hype in the press with descriptions such as it tasting ‘like a slice of heaven’. I’m not too sure, and my suspicion is that the reviewer was a cannabis newbie or has really low tolerance levels.

Finally, there is Exotikz by the Jungle Boys; the strain I referred to above. The packaging on this strain screams QUALITY and, I have to admit, it was enough to hook me into a purchase of a 1/8th ounce for $54. I love the look of it so much, I have yet to open it. I’ll be sure to post something when I do!

4 Tips For Choosing The Right Property For Your Business

How the Internet of Things is Changing Urban Planning

Yesterday I came across a post on social media that encouraged black women to blindly support black men.
byCreighton Leigh 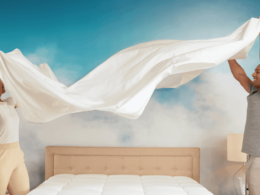 What is the Perfect Ratio of Bedroom to Bed Size: A Guide

Has it ever happened to you that you enter a room but are required to squeeze around the bed because it completely dominates the room?
byTUT Staff

Imagine it is a warm sunny day outside after days of cold weather and you want to enjoy the warmth of the sun out in your patio or garage.
byTUT Staff

Can CBD Gummies Help With Depression?

People are taking CBD for all sorts of afflictions, such as pain, inflammation, anxiety, PTSD, epilepsy, and more. It sounds like a miracle drug, doesn’t it? How can one substance help with so many ailments?
byTUT Staff