A defiant Texas salon owner says she’d rather go to jail than close her shop in compliance with local stay-at-home orders.

Positioning herself as the figurehead for the Open Texas movement, Salon owner Shelley Luther, doesn’t mind facing jail time after she ripped up a citation issued to her for refusing to close her business’ doors.

Luther, owner of Dallas’ Salon À la Mode, was first hit with the $1,000 citation last week, which she ripped up at a rally following. A week later, she was hit with a cease-and-desist and temporary restraining order from local officials. In the docs, they say she chances “irreparable injury” to locals with the “substantial risk of continuing the spread of the deadly COVID-19.”

During Luther’s latest rally at her salon, she again, defiantly, told officials she was not going to close. She told the crowd, “Apparently there’s a very good chance that I’m getting arrested today and I will do everything I can to keep the shop open because I’m not closing the store. If they arrest me I have someone that will keep the store open because it’s our right to keep the store open. It’s our right for those women to earn income for their famil[ies].”

Luther later blasts Dallas County Judge Clay Jenkins for closing what he deems non-essential businesses. She affirmed, “All I know is he’s abusing his power… he’s got to be stopped somehow. 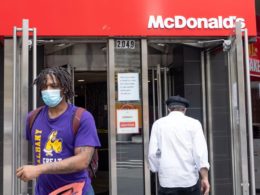 McDonald’s To Require Mask Wearing For Customers In All U.S. Restaurants

The food company added that it’s pausing dining room re-openings for an additional 30 days and adding protective panels “to create even safer conditions for our employees and customers.”
byBien Luigi

Whether you’re a gearhead looking to turn your passion for cars into generating profit or an aspiring entrepreneur taking your first steps to become a full-fledged business owner, running an auto repair shop is as enjoyable as it is lucrative.
byTUT Staff

Small Business Relief and Recovery During The Coronavirus Pandemic

Small businesses everywhere are trying to dig themselves out of this pandemic hole. The good news is that there are solutions.
byBrandon Brooks