Members of the LGBT+ community with HIV or AIDS may have compromised immune systems or a higher chance of being homeless than the wider population.

State lawmakers urged U.S. officials on Thursday to determine how many coronavirus patients are LGBT, saying the data could be critical to the health of the gay and transgender community amid the pandemic.

Other minority groups such as African Americans and Latinos have been shown to be suffering higher death and infection rates than the general public, said legislators from New York, California, Colorado and Pennsylvania.

They staged a virtual town hall calling for data collection at state and federal levels.“If you don’t know where it hurts, you don’t know how much it hurts, you’ll never fix what hurts,” said Malcolm Kenyatta, a Democratic Pennsylvania state representative.
Kenyatta recently introduced a bill calling for state government forms that collect demographic information to include an LGBT identification option.

“We are ignored, and the scope of the problem is not readily available in data that we can all share,” he said.

The U.S. Centers for Disease Control and Prevention (CDC) has broken down coronavirus cases publicly by location, race, gender and age but not sexual orientation or gender identity.

Health departments in New York, Louisiana, New Jersey and Michigan, states hardest hit by the coronavirus so far, also said they were not collecting LGBT data.

“You can’t address a problem you can’t see,” said Randall Sell, a professor at Drexel University’s School of Public Health who specializes in LGBT demographics.

“It could be wiping out whole communities and we don’t know.”
The United States has the highest number of confirmed coronavirus cases worldwide, with more than 1,075,000 infections and about 60,000 deaths.

In mid-April, the United Nations urged countries to protectLGBT people during the pandemic.
Members of the LGBT community with HIV or AIDS may have compromised immune systems or a higher chance of being homeless than the wider population, making social distancing and safe hygiene difficult, it said.

Data from U.S. states has shown minority groups with longstanding disparities in health and inequalities in access to medical care, African Americans in particular, are more likely to die from COVID-19.

In Illinois and in Michigan, black people make up about 40% of coronavirus-related deaths, yet they are less than 15% of the states’ population, data has shown.

Jack Turban, a physician in psychiatry at MassachusettsGeneral Hospital who has recovered from COVID-19, said officials need data to identify and address health disparities.

“Medicine has a long history of ignoring minority groups, including LGBTQ people, resulting in worse health outcomes,” Turban said in an email. “We can’t continue to make that mistake.”

$180 Million In Total Of Bonuses Given By Walmart To Employees

News has just emerged from scientists who now say that the death rate from COVID-19 is much lower than previously thought.
byBien Luigi

Everything You Need to Know About Hair Transplant Surgery

If you are struggling with hair loss, it can be challenging and can lead you to feel upset about the state of the hairline or the effect that it is having on your confidence.
byTUT Staff 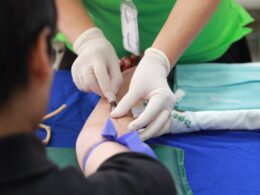 Nursing is an excellent career option for anyone looking to work within the world of healthcare.
byTUT Staff

Best Ways To Warm-up Before Starting Your Gym Workout

So you’ve managed to get out of bed and drag yourself down to the gym.
byTUT Staff