She praised Biden’s commitment to fighting climate change, pushing for an economic recovery for all, and protecting every American’s right to vote.

As rising Democratic Party star, Abrams gained a national profile in her failed bid to become Georgia’s governor in 2018 and is a leading voting rights advocate in the southern state.

The former U.S. vice president, Biden, has vowed to pick a woman to join his ticket and suggested he would consider her as a running mate.

“Vice President Biden is the leader America needs — a leader who will restore dignity, competence and compassion to the Oval Office while restoring America’s moral leadership around the world,” Abrams said in a statement.

She praised Biden’s commitment to fighting climate change, pushing for an economic recovery for all, and protecting every American’s right to vote.

“While marginalized communities struggle under Donald Trump’s failed leadership and people of color face disproportionate consequences of COVID-19, Joe Biden will take no one for granted,” Abrams said.

Others include Michigan Governor Gretchen Whitmer, who has gained a high profile leading Michigan amid protests during the coronavirus outbreak and Representative Val Demings of Florida, a key battleground state.

May the Space Force be with you - and your business 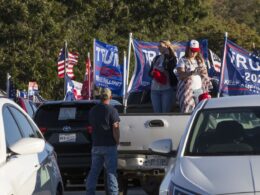 Some users in social media alleged the caravan chose the mostly Black area as its final destination in order to frighten residents.
byBien Luigi

5 Comparisons Between US Police and The Gestapo

The U.S. police force and the Gestapo have many things in common.
byTroy Patterson