The app sparked criticism on social media by pledging solidarity with the Black Lives Matter movement while having the ethnicity filter, which many find hypocritical.

National protests against police brutality and racial inequality has been answered by Grindr with rendering one of its most-criticized features obsolete.

The gay dating and social networking app, in an effort to “stand in solidarity” with the Black Lives Matter movement, announced it will stop its ethnicity filter, which permitted users to sort through potential connections by race.

Recently sold by Chinese gaming giant Beijing Kunlun to the U.S.-based San Vicente Acquisition Partners for a reported $608 million, the app had planned to kick off its LGBTQ Pride Month initiatives Monday. However, both the protests and the impact of the coronavirus had carried about “an added responsibility, a shifted tone” for 2020.

Officials wrote on Instagram, “How can we launch a month of celebration when so many of us are hurting?” when the company’s plans for Pride would instead be announced Tuesday.

“How can we celebrate Pride without acknowledging that we wouldn’t even HAVE a Pride month if it weren’t for the brave black, brown, trans, and queer folks whose uprising against the police at Stonewall gave birth to the modern LGBTQ rights movement?” the company’s post continued. “It is our responsibility to speak out against the hate and violence that such a vital part of our community continue to face.”

However, did not specify a date when users can expect to see the filter removed.

News of Grindr’s forthcoming revision came after the app sparked criticism on social media by pledging solidarity with the Black Lives Matter movement in a since-deleted May 29 tweet. Pointing to the ethnicity filter, many followers called the company’s gesture hypocritical.

Much like other dating apps, Grindr has long been accused of racial profiling, as well as reinforcing stereotypes and other divisive views, by allowing users to filter prospective matches by race.

A 2018 Cornell University study found that Black men and women were 10 times more likely to message white users on dating apps than white users were to message Black people.

That same year, however, Grindr appeared reluctant to revise the ethnicity filter.

“While I believe the ethnicity filter does promote racist behavior in the app, other minority groups use the filter because they want to quickly find other members of their minority community,” Grindr’s head of communications, Landen Zumwalt, told The Guardian at the time. 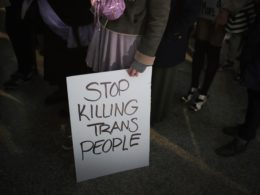