Ye is also putting his fortune to good use, he has committed to paying the college fund for George Floyd’s daughter.

Kanye West is once again making major financial changes even after being fresh off his new billionaire position.

West is at the very top of the list in the world’s highest-paid musicians has just been released. He has made so much money this year that he is $90 million ahead of Elton John, who placed second on the list.

The bulk of Kanye’s massive funds are the result of his successful Yeezy sneaker deal with Adidas and he also owns 100% of Yeezy—which is reportedly worth 1.3 billion, giving Kanye’s estimated net worth a boost to over 3 billion. As for the other hip hop artists that trail behind Kanye on the list, Diddy made $55 million in 2020, Jay Z with $53.5 million, Drake raked in $49 million, Travis Scott cashed in at $39.5 million and DJ Khaled has made $36.5 million so far in 2020.

Ye is also putting his fortune to good use, he has committed to paying for George Floyd’s daughter, Gianna Floyd’s, college fund—while also donating $2 million to the families and legal teams of Ahmaud Arbery, Breonna Taylor and George Floyd.

Meanwhile, Kanye’s wife Kim Kardashian West also announced she’s donating to the cause. She revealed that her companies SKIMS, KKW Beauty and Fragrance are donating to various organizations committed to racial equality, including the NAACP, #BlackLivesMatter, Color Of Change and the National Urban League.

HBO 'The Leftovers' series may be over but that isn't the case for its star Jasmin Savoy Brown.
byChristina Jeter

Laurence Fishburne had to almost go "Morpheus" on a guy claiming that he was squatting inside of his own home.
byBrennen Jones 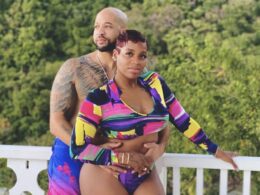 Although, they had not planned to have a child together initially, but her mother encouraged them to embrace the idea.
byBien Luigi