Zaya Wade Embodies Medieval Pride With Dwayne As She Turns 13

The retired NBA star and his wife is determined to provide his daughter with “the best opportunity to be her best self.”

To usher his daughter Zaya into her teenage years, Dwyane Wade turned the clock back a few centuries in a “modern medieval kingdom” party.

Snapshots of the family celebrating Zaya’s 13th birthday was shared by Wade’s wife, Gabrielle Union, over the weekend.

Sporting lavender braids and a floor-length green gown paired with black-and-yellow printed trousers, Zaya rocked on the outfit. Meanwhile Union wore an empire dress and a flower crown. Wade put a 21st century spin on an Old World look, too, by sporting a fiery red hairdo and a black kilt.

As for the birthday girl, she used the occasion to acknowledge LGBTQ Pride Month, too, captioning one of her images, “Stronger together #happypride.”

The celebration came months after Wade first spoke publicly about Zaya’s gender identity in an ESPN documentary, “D. Wade: Life Unexpected,” as well as a series of emotional interviews.

Describing himself and Union as “proud allies,” the retired NBA star said he was determined to provide his daughter with “the best opportunity to be her best self.”

“Zaya, early on, knew two things,” Wade told “Good Morning America” in February. “She knew ‘straight’ and she knew ‘gay.’ But Zaya started doing more research. … She went down the list and said, ‘This is how I identify myself. This is my gender identity.’”

“As parents, we put our hopes and our fears on our kids,” he said. “With Zaya, we decided to listen to her. She’s leading us along this journey.”

Zaya made her red carpet debut in March. She appeared alongside Union and Wade at the Better Brothers Los Angeles’ sixth annual Truth Awards, which was “created to recognize and highlight the accomplishments of the Black LGBTQ community and its allies.”

“We couldn’t have been prouder of how she handled the questions that were asked of her,” Wade wrote on Instagram at the time. “She has emerged as one of the young faces and voices for the LGBTQ community.” 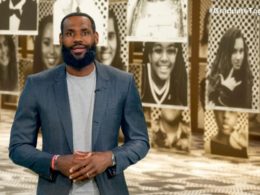 Per the release, the funds will be raised off of proceeds from a screening of John Lewis: Good Trouble.
byBien Luigi