Volunteers later erased all the graffiti.

A white man was spotted spray-painting the base with “White Lives Matter,” a racist counter-slogan to the Black Lives Matter movement that has gained momentum since the police killing of George Floyd in Minneapolis.

“Don’t all lives matter?” the man told a Richmond Times-Dispatch reporter observing him. “I’m not a racist. I just don’t agree with people desecrating property.”

“BLM” was spray-painted over previous “WLM” tags on the statue before the man arrived, according to the newspaper.

“There are people who have an agenda,” David Harris Jr., Ashe’s nephew, told the Times-Dispatch. “Some of them are still settling on hate and discord because they see the system changing before them, and they’re lacking influence and control over it.”

Volunteers later erased all the graffiti.

Ashe, who died in 1993, was the first Black man to win Wimbledon, the U.S. Open and the Australian Open.

Ashe’s statue stands among several honoring historical figures of the Confederacy on Monument Avenue, the New York Post noted. Many of the city’s statues commemorating the South’s military in the Civil War have been pulled down, tagged or scheduled for removal amid protests.

Police are investigating leads in the Ashe statue vandalism, CBS in Richmond reported in the segment above. 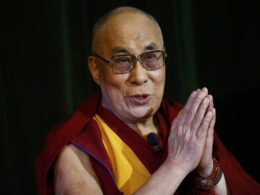 The U.S. is essentially rejecting to agree if China, while in control of Tibet, moves to pinpoint the next reincarnation of His Holiness.
byBien Luigi 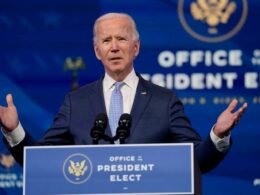 He called the attack on the Capitol “One of the darkest days in the history of our nation.”
byBien Luigi

“Their statues pay homage to hate, not heritage.”
byBien Luigi