According to Johnson, an independent Black political party would act as a vehicle to advance the “permanent interests” of Black Americans in the United States.

The founder of Black Entertainment Television (BET), Bob Johnson, sent an open letter last week, to the “leaders and supporters” of the Black Lives Matter movement calling for them to contemplate establishing “a formal independent political party.”

The 74-year-old businessman, dubbed “America’s first Black billionaire,” also laid in the letter the framework for the party by suggesting what its foundational principle might be.

“The party could be founded on the principle articulated by the founding members of the Congressional Black Caucus (CBC) in 1971,” He said.

This specific principle asserted that Black people have “no permanent friends, no permanent enemies … just permanent interests.” Former Missouri Rep. William L. Clay, who represented a largely Black St. Louis-area district and was a founding member of the CBC, proclaimed those words — which later became a motto of the caucus — in a speech as the group was established.

According to Johnson, an independent Black political party would act as a vehicle to advance the “permanent interests” of Black Americans in the United States.

Johnson, who challenged the assumption that these independent parties can’t gain substantial power, leverage and influence and acknowledged that the idea of Black people forming an independent party is not new. “I believe a politically astute and structured Black independent party, committed and engaged in the electoral process, can prove them wrong,” he said.

In the June 17 letter he also praised the Black Lives Matter movement for its success in motivating and mobilizing people across the world to fight racial injustice in a way “not seen since the Civil Rights movement.”

Johnson called on the leaders of the movement to reflect on how they can hold America accountable to its promise of “the American Dream for all” via the route of the political system.

Johnson previously has spoken up at times of a public discussion regarding racial iniquities. In 2016, amid the controversy swirling around the lack of diversity at the Academy Awards, he gave an interview in which he called on major studios to produce more diverse projects and for the Academy to add more minorities to the list of judges.

Earlier this month, he called for $14 trillion in reparations to be distributed to Black American descendants of slaves. In an interview with CNBC, Johnson stated that “wealth transfer is what’s needed” to fight racial inequality and narrow the wealth gap.

The media mogul built his fortune by founding BET in 1979 with his wife Sheila. He later sold the network to Viacom in 2001. Since then the Princeton-educated businessman has invested in an NBA team, a film company, and created a new business venture, RLJ Companies. 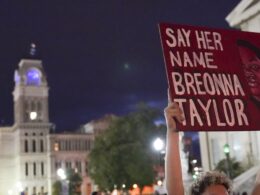 Taylor’s killing is among a growing list police killings involving Black victims year, and, similar to the killing of George Floyd.
byBien Luigi