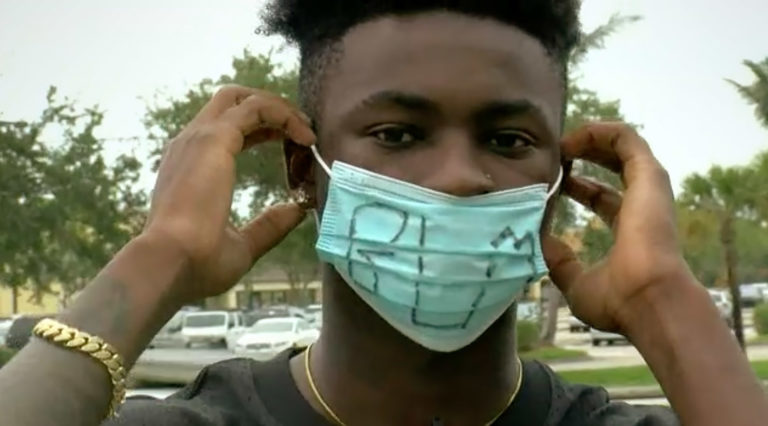 Quinton Desamours, 18-year-old Florida Publix employee, said he was sent home for wearing a face mask with the letters “BLM” on it, which represent #BlackLivesMatter.

Desamours said he was “speechless” when his assistant manager pulled him aside to talk about his face mask, which is now required for all employees to wear following the coronavirus outbreak.

He said his assistant manager informed him the he couldn’t wear it. “He told me the company hasn’t issued a statement and that he doesn’t know if they’re pro or con on the issue, and that I am endangering myself and everyone who worked there.”

Desamours decided that his commitment to #BlackLivesMatter was much important than his job:

“Today Publix sent me, a Publix employee home for having “BLM” written on my mask. The assistant store manager told me he doesn’t know if the company is “Pro or Con”. I will no longer be working for Publix. Stand for something or you’ll fall for anything!”

A Publix spokesperson said the company stands behind its decision to ensure a “welcoming work and shopping environment.” Publix has a policy that prohibits all non-Publix messaging on uniforms, so spokeswoman Maria Brous explained that Desamours was violating that policy.

“At Publix, we reject racism and believe diversity makes our company — and our community — better. Our focus remains on ensuring a welcoming work and shopping environment for all associates and customers. Our uniform policy does not permit non-Publix messaging on clothing or accessories.”

However, that policy only became known to the public when Desamours tweeted about it June 6th.

Boogeyman: The Ghost in the American Machine