“It is with a very heavy heart that I inform you that my beautiful wife Kelly has lost her two-year battle with breast cancer,” Travolta wrote.

At the age of 57, John Travolta revealed that his wife, actress Kelly Preston, passed away on Sunday. The pair married in 1991 after meeting on the set of 1989’s The Experts, and he paid honor to her on his Instagram account.

“It is with a very heavy heart that I inform you that my beautiful wife Kelly has lost her two-year battle with breast cancer,” Travolta wrote.

“She fought a courageous fight with the love and support of so many. My family and I will forever be grateful to her doctors and nurses at MD Anderson Cancer Center, all the medical centers that have helped, as well as her many friends and loved ones who have been by her side. Kelly’s love and life will always be remembered. I will be taking some time to be there for my children who have lost their mother … please know that I will feel your outpouring of love in the weeks and months ahead as we heal.”

Over the decades, Travolta and Preston appeared in multiple films together including Battlefield Earth and Gotti, in which she portrayed Victoria Gotti alongside Travolta, who played the infamous American gangster.

She was also featured with Tom Cruise in Jerry Maguire; some of her other notable roles included For The Love Of The Game, Twins, SpaceCamp, Holy Man, and Secret Admirer.

Meet Belina Buisson-Wright, An Artist That Gives Life To Everything She Creates

Artist Belina Buisson-Wright brings to life the colorful beauty of the world especially the culture, tradition, and lifestyle of Haiti.
byChristina Jeter 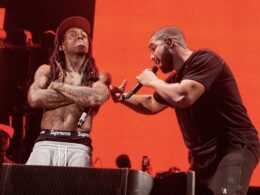 Partaking pictures that date back to their “HYFR” video shoot and Drake’s disreputable Lil Wayne impression on Saturday Night Live, Drake included a touching caption to the picture.
byBien Luigi