Harden had always planned to join their teammates prior to the restart of the NBA season.

All-NBA guard James Harden will reportedly participate in his first practice of minicamp today after a delay in traveling to Orlando to join the Houston Rockets ahead of the NBA restart.

Along with backcourt mate Russell Westbrook, Harden did not join the Rockets on their way to Orlando initially, but had always planned to join their teammates prior to the restart of the NBA season. Harden’s presence will be a welcome addition for a team that operates so fully around him on offense. Westbrook, on the other hand, remains in isolation after testing positive for COVID-19.

Expect a lot of talk about Harden’s physical fitness and additions to his game once he’s back on the court for the Rockets, as his hiatus workouts in Arizona have already become folkloric. Let’s hope whatever caused a delay in travel for Harden does not affect his game and the fascinating small-ball Rockets can pick up where they left off in March.

You think you have what it takes to pick the most winners and become the king of the NCAA tournament hill? Join our free bracket and show us what you got.
byBrennen Jones

Three University of Southern Mississippi football players were shot during a fight at a nightclub, and all three…
byAssociated Press 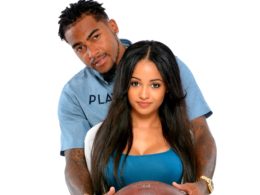