Even after so much time together on American Horror Story, Sarah Paulson and Ryan Murphy can’t quit each other.

Now their follow-up, Netflix’s Ratched, is arguably even more disturbing.

With the iconic villain portrayed by Louise Fletcher in One Flew Over The Cuckoo’s Next, Paulson’s picking up an origin-story turn on nurse Mildred Ratched. The show’s final trailer doubles down on the peach-related decay after the last one promised there would be hell to pay if you steal Ratched’s breakroom fruit.

The trailer glides through the many horrors that patients bear at Lucia State Hospital. That involves excruciating “steam baths” as well as experimental lobotomies, and the works… basically everything that will make you feel relieved for the relatively civilized state of modern medicine. All of it looks glossy as can be with a medicinal sheen and a fantastic cast that includes Cynthia Nixon in a meaty role and Judy Davis as a nurse who’s even more fearsome than Ratched, if you can believe it.

Paulson recently told Entertainment Tonight how she felt that “the stakes are exceedingly high” to step into a legendary character’s shoes, especially since this story might refashion the way you view Mildred Ratched. From the synopsis:

In 1947, Mildred arrives in Northern California to seek employment at a leading psychiatric hospital where new and unsettling experiments have begun on the human mind. On a clandestine mission, Mildred presents herself as the perfect image of what a dedicated nurse should be, but the wheels are always turning and as she begins to infiltrate the mental health care system and those within it, Mildred’s stylish exterior belies a growing darkness that has long been smoldering within, revealing that true monsters are made, not born.

On May 16 MTV will be launching a new website dubbed a "homestead for artists", which will bring together fans and artists on a single simplified platform.
byDaniel Mbure 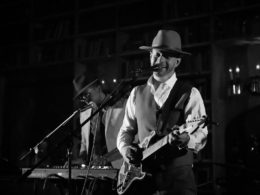 The original track, which amassed over 100,000 views on YouTube, takes on a slow melodic feel as de la Hoyde rap-sings a la Drake or Bryson Tiller.
byVictoria Johnson