Many players would be hesitant to play for an organization whose star player cast such a long shadow, but LeBron welcomed the challenge from the beginning.

The Los Angeles Lakers defeated the Miami Heat on Sunday in Game 6 to win the 2020 NBA title. With his third different team, it marks LeBron James’ fourth championship in his already stellar and a mind-boggling 17th championship for the Lakers organization.

Kobe Bryant’s tragic death has emerged large over the organization during the playoffs in Orlando. The Lakers as a team have not shied away from the heaviness of the unconceivable loss and the self-inflicted pressure they willingly expected to bring home this year’s title as an acknowledgement to the NBA legend who is gone far too soon.

By regularly wearing their Black Mamba uniforms, they paid tribute to him throughout the playoffs. The uniform was originally designed by Bryant back in the 2017 season, and Anthony Davis discussed Bryant’s influence on the team after they hoisted the Larry O’Brien trophy.

It was much more personal for LeBron. Kobe and LeBron had developed a unique bond over the years as friends and competitors, and the loss hit LeBron particularly hard. On Wednesday, LeBron took to Instagram to share a simple but moving tribute to the man whose enormous shoes he’s had to fill as he’s taken up the helm for the franchise where he spent his entire career.

Many players would be hesitant to play for an organization whose star player cast such a long shadow, but LeBron welcomed the challenge from the beginning, and Kobe didn’t hesitate to welcome him into the fold and pass the torch when signed in free agency two summers ago.

The Lakers will now start looking toward the future, where they figure to remain as one of the top title favorites next season with their superstar duo of LeBron and Anthony Davis. There’s no doubt that Kobe would be proud of what his friend and team have accomplished this season, not to mention their potential to continue their dominance and extend the Lakers’ legacy.

“She’s like, ‘Oh, I’ll wait for my tutors,’” Union said about Zaya with a laugh.
byBien Luigi

VR and its impact on Soccer

Sport isn’t pushing these developments, but some of the more innovative teams have started to adopt virtual reality in some ways into their team training and match reviews.
byTUT Staff 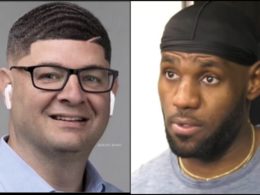 LeBron taking the side of Wojnarowski in this instance is notable given ESPN’s partnership with the NBA and that, well, LeBron is LeBron.
byBien Luigi

We lost a boxing great last night in Joe Frazier, who was much more than just Ali's foe.
byAssociated Press