Redemption has been a long time coming for Tiger Woods but it has finally arrived after a turbulent decade. Now, the 15-major winner is able to comfortably look back at the man in the mirror once more and hold his head up high when strolling the fairways of the world’s greatest golf courses.

In fact, it’s hard to think of a time over Woods’ 24-year career out on the PGA Tour where he has had a better image or been thought of this highly. Of course, he made waves very early on in his career after his professional debut on the 29th of August 1996 and it was less than a year later when he became a global superstar after winning the Masters in April 1997, but even then, he wasn’t that well-liked.

👨‍👦 @TigerWoods and his father Earl, celebrate after his 1st @TheMasters win.

👨‍👦 @TigerWoods and his son Charlie, celebrate after his 5th @TheMasters win.

He was adored by millions but just as many were unable to buy into Tiger-mania thanks to his perceived cold persona. At the time, there wasn’t a sportsman on the planet that possessed the will to win that Woods did and he paid the price for that, often being called wooden and stony. In many respects, Woods was downright unfriendly and even battled to forge lasting relationships with his various coaches and personal trainers.

Perhaps the view of Woods was somewhat harsh given that he was a young man trying to find his way in the world whilst the brightest spotlight in sports history shone on him. Whatever the case, by the time his life came apart at the seams in 2009, he had developed a reputation for being surly and was afforded very little in the way of sympathy by most of the public.

Crossing the Atlantic in a canoe must have seemed easier than walking the road to redemption that lay ahead of him as the storms kept breaking over him during the year that followed. Sure enough though, Tiger put one foot in front of the other and began the journey towards absolution through golf.

Chronic back injuries threatened to end his attempt to salvage his image but groundbreaking spinal-fusion surgery gave him a new lease of life. Woods’ first victory in five years would come in 2018 after he won the Tour Championship at East Lake Golf Course, the world could scarcely believe that the big cat was on the prowl again after all that had happened, but more unimaginable scenes were to follow.

In an incredible show of skill, courage, and determination, Woods would win the 2019 masters and claim his first major victory since 2008. If you need a bit of context to truly understand how astonishing that victory was, then take a minute to look at Woods’ odds in golf betting to win the 2021 Masters, they lie in the region of 45/1. Indeed, sensational doesn’t begin to do Woods’ Masters feat any justice.

"When I tapped the putt in I don't know what I did, apart from I know I screamed! To have my kids there, it has come full circle. My dad was here in 1997 and now I'm a dad. It's incredible."

Tiger Woods after holing the winning putt at the 2019 Masters. pic.twitter.com/6Lxd08WCbH

Despite his heroics at Augusta National with golf club in hand, it was the image of Woods and his children on the 18th green that would serve as the lasting image of that tournament. From the depths of despair, Woods had given his kids – who weren’t old enough to remember him ever winning a major – a reason to be proud of their dad again. The world softened at that moment and there were very few dry eyes in living rooms around the world.

Wood’s ability to overcome adversity gives us all strength and is the reason for his new positive image. But one mustn’t forget that in the background, his foundation provides millions of dollars to underprivileged communities every year. His reach totally transcends that of golf.

Tiger Woods is in every sense of the word, a role model we can all look up to. It hasn’t always been the case, but he proves that it is how you come back from the fall and not the fall itself.

‘Among Us’ Now On Nintendo Switch

The New England Patriots quarterback was suspended four games for his involvement in the ‘Deflategate’ Scandal.
byTUT Staff 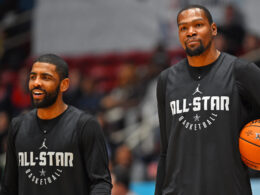 The biggest question for Durant wasn’t whether he’d be good offensively, but more if he’d have the same burst off his first step.
byBien Luigi

23-year-old Walker had just completed his first year in professional football. A Florida native, he had been drafted by the Ravens in 2015 and played only 8 games.
byMelony Hill

Saints’ Sean Payton Suspended For The 2012 Season Without Pay

In light of “BountyGate”, NFL commissioner, Roger Goodell, has suspended Sean Payton for the entire 2012 season without…
byHubert