He called the attack on the Capitol “One of the darkest days in the history of our nation.”

President-elect Joe Biden is unrelenting to speak out, after Trump followers rioted at the U.S. Capitol yesterday, condemning the actions of those involved.

Calling them “domestic terrorists,” he called out President Trump’s supporters and spoke on the dissimilarity in the behavior they received equated to those who protested for Black Lives Matter.

President Biden called the attack on the Capitol “One of the darkest days in the history of our nation.” In a drawn-out speech, he recollected a conversation with his granddaughter during the months following George Floyd’s killing by Minneapolis police last year.

He said,” A little over an hour and a half after the chaos started, I got a text from my granddaughter Finnegan Biden, who is a senior in her last semester at the University of Pennsylvania. She sent me a photo of military people in full military gear, scores of them lining steps of the Lincoln Memorial because of Black Lives Matter’s protests. She said, ‘Pop, this isn’t fair.”

He continued, “No one can tell me that if it had been a group of Black Lives Matter protesting yesterday, they wouldn’t have been treated very, very differently than the mob of thugs that stormed the Capitol. We all know that’s true, and it is unacceptable. Totally unacceptable. The American people saw it in plain view, and I hope it sensitized them to what we have to do.”

President Biden’s speech quickly began trending on Twitter. Many agreed with his speech. Vice President-elect Kamala Harris also spoke out against the treatment on Twitter. She tweeted, “We have witnessed two systems of justice: one that let extremists storm the U.S. Capitol yesterday, and another that released tear gas in peaceful protestors last summer. It’s simply unacceptable.”

The Senate has a majority of Republicans and before the second round stimulus package can be approved, they have to give it the green light.
byBien Luigi 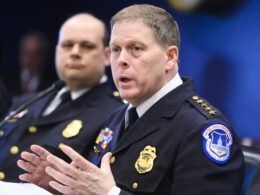 “The violent attack on the U.S. Capitol was unlike any I have ever experienced in my 30 years in law enforcement here in Washington, D.C.,” Sund said.
byBien Luigi