Dan Harmon, creator of NBC’s “Community”, gets an unfair lecture for speaking his mind.

After getting booted off NBC’s “Community” last year, Sony asked him to return to the show when its most recent season proved unsuccessful. “Community” fans rejoiced, and it seemed like everything was back to normal in the “Community” fandom. Until Father’s Day.

Dan Harmon at a panel for “Community” at PaleyFest 2010.

On Sunday, Harmon published a new episode of Harmontown, the podcast he created in conjunction with Jeff Davis. During this episode, Harmon discussed season four of “Community”, a.k.a. the season he got kicked off. He hated it. He spends the episode ranting about Sony and their failed attempts to improve the show, while also mercilessly taunting the writing throughout the season.

Harmon started to get a little carried away with his language and probably picked some of the worst analogies possible. He said watching his characters without him there was like “flipping through Instagram watching your girlfriend just blow a million guys.” It gets worse, but some background first: Harmon wanted Bill Murray to play the role of Jeff Winger’s dad in the show. When the new writers came along, they cast Josh Brolin instead. Harmon was on a roll during his podcast, so he unsurprisingly mentioned his crushed dreams:

Not the best way to put it. After that, fans freaked out. They said he shouldn’t have been so vulgar, he shouldn’t have made a “rape joke”, etc. Harmon apologized, yet his Tumblr tag is still buzzing with discussion. And I suspect it will be for some time.

I admit what Harmon said was pretty appalling and borderline inappropriate. I’m not going to defend that. I am, however, still going to defend him. The poor guy was ripped to shreds by people, and he really didn’t deserve that. He spoke his mind on his podcast and had every right to do so. Was it the most politically correct approach? No. But this simply makes him guilty of something we’re all guilty of: being vulgar, thinking before speaking and saying the wrong thing.

As a society, we feel the need to put celebrities, athletes and politicians on a pedestal. People say they’re supposed to be examples for us, but at the end of the day, that’s so unfair. When people are viewed that way, they’re no longer entitled to imperfection. They can’t say or do the wrong thing without fans demonizing them. I feel bad for people like Harmon. One slip-up will always explode, and they’re left with anonymous faces telling them how wrong they are.

Come on, guys. They’re only human.

From Jay Hovah to Yeezus: Why Do Rappers Have God Complexes?

In acquiring the services of Robert Shapiro, Rob has tapped legal representation that is synonymous with the Kardashian name.
byPascal Mnyika 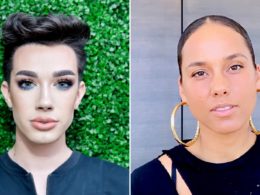